Of Border Walls and Dreamers: Too Much or Not Enough? 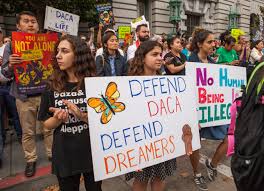 Central to President Donald Trump’s campaign was a promise to build a wall on the United States-Mexico border to curtail the movement of illegal border-crossers. Since the election, Trump has walked back the need for the wall to cover the entire border, noting, “There are certain places you don’t need a wall, because you have mountains, you have other things. You have large and rather vicious rivers.” The President has also stepped back from insisting that the Mexican government will pay for a U.S. border fortification.

At the same time, Congressional Democrats (whose votes will be needed for a successful immigration deal, as all legislation requires 60 votes to clear the Senate’s filibuster rule) are loath to support any border security improvements involving barrier construction.  According to the Democrats, this might appear to give President Trump a political victory—even as they look increasingly likely to make advances in the November 2018 midterm elections. Also, perhaps due in part to prospective migrants expecting tougher immigration enforcement by the Trump administration, estimates of illegal border crossings showed a substantial dip from 2016 to 2017.

Unlike the common-border zone in Continental Europe and some Latin American countries including Brazil, Argentina, and Uruguay, the United States does not have “exit controls” at air and sea ports of entry. In other words, travelers do not need to present their passports for inspection by immigration officers when leaving the country. The 9/11 Commission recommended that the U.S. implement an entry/exit tracking system; this sensible recommendation has not been implemented.

Both issues are complicated by a lack of rigor in the current system for verifying whether or not an employee is legally authorized to work in the United States. The Form I-9 currently mandated by the Department of Homeland Security (DHS) for establishing legal work authorization relies on employees providing documents establishing identity and work status to the employer, who then retains the information subject to inspection by DHS. Some states require employers to use the DHS’s alternate system, E-Verify, which uses Social Security Administration and other records to confirm an employee’s documents match the employee. Restrictionists tend to favor expansion of E-Verify requirements to prevent fraud and counterfeiting; business groups contest that the system is imperfect and may deny a legal worker the right to begin work.

In August and with the backing of the Trump administration, U.S. Senators Tom Cotton (R-Arkansas) and David Perdue (R-Georgia) introduced proposed legislation titled the “RAISE Act.” The bill would, in the words of President Trump, constitute “the most significant reform to our immigration system in half a century.”

The most notable reform proposed by the RAISE Act is a fundamental change in how the United States chooses who should be permitted to immigrate. Under current law, it is extraordinarily difficult for people who do not have close family ties to the United States to immigrate here. Under this “family reunification” system, called “chain migration” by the President and other critics of the current system, a foreigner can be sponsored for immigration by certain close relatives already residing here. There exist two classes of family reunification immigrant visas: immediate relatives and family preference. These grant entry to the U.S. for an immigrant who will eventually receive permanent resident status or a “green card.”

Both family unification programs include a probationary period: if the foreigner in question hasn’t committed a crime or engaged in terrorist or political extremist activities for a certain number of years, he can legally immigrate, receive a green card, and later become a citizen.

Critics of this “chain migration” note that an immigrant can sponsor his immediate family and a sibling; after they receive citizenship they can do the same, creating an unending “chain” of immigrants. In practice, restrictions are placed on the emergence of such a chain: Each immigrant must spend up to a decade as a permanent resident, and can only sponsor immediate family. Additionally, quotas on total sponsorships of the family preference classes remain in place, meaning that a sponsored foreigner may have to wait up to another decade before entering the United States.

These family admissions are the keystone of the current American immigration system. Most immigrants entering the country are admitted using a family reunification visa; about two-fifths of immigrants arrive as immediate family members while an additional fifth are admitted under family preference.

The RAISE Act would fundamentally reorient the purpose of American immigration policy. While U.S. citizens would still be able to sponsor their minor children and spouses for immigration, other family preferences would be abolished, and parents of Americans would only be eligible for temporary residence visas. In place of the family-based “chain migration” system, the RAISE Act would institute a “points-based” system, by which skills (such as English proficiency) and personal attributes related to a prospective immigrant’s earning potential (including age) are scored and those immigrants with the most points would gain admission. The immigration systems of the United Kingdom, Australia, and Canada all follow a points-based selection process.

While some commentators on both sides of the immigration debate found the merit-selection points-based system in the RAISE Act to be an intriguing policy idea, the bill contained a second, far more controversial provision. Currently, the United States issues lawful permanent residence to approximately 1 million immigrants per year. Roughly half of green cards are issued to people already living in the United States on a visa (students, temporary workers, refugees, fiancées, and so forth) to mark a change in status; slightly less than half are issued to new arrivals on immigrant visas.

The RAISE Act would cut the number of green cards issued annually to 500,000 by 2027. Even some relatively restrictionist commentators have questioned the need for a drastic cut in legal immigration, especially as the merit-based system RAISE would ensure that immigrants are net contributors to the public treasury and to civil society as well. A merit system would also ease foreign-born competition with lower-skilled native workers, which many restrictionists see as the principal reason for migration restrictions.

Of Border Walls and Dreamers next installment will introduce the figures and organizations leading the various factions involved in the debate.