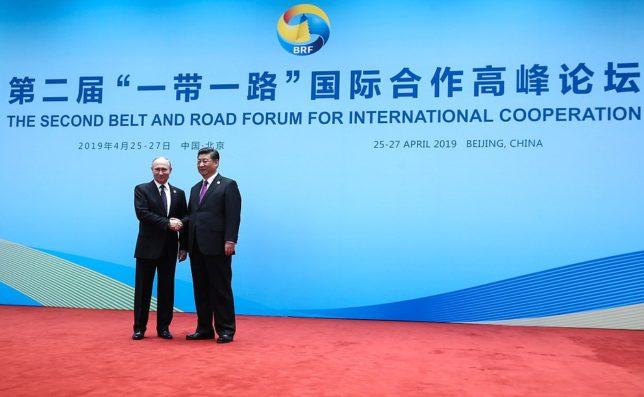 The Oak Foundation, a Switzerland-based nonprofit foundation founded by British billionaire Alan M. Parker, funds numerous environmentalist organizations and climate litigation efforts led by legal advocacy groups like the Center for International Environmental Law and EarthRights International. These nonprofit law firms sue oil and gas corporations in the U.S. and Canada for contributing to global warming. At the same time, Oak makes hefty grants to environmental groups like ClimateWorks, Environmental Institute, and the World Wide Fund for Nature in support of China’s Belt and Road Initiative.

The Belt and Road Initiative (named after two separate projects, the Silk Road Economic Belt and the 21st Century Maritime Silk Road) is the name given to a massive set of infrastructure projects spanning 125 countries conducted primarily by the Chinese government. Initially, the project aimed to create land and sea routes to reach across the entirety of Eurasia, but it has expanded to include various infrastructure investments like highways, ports, railways, optical cables, and gas pipelines and has extended into regions as distant as South America and Australia. Chinese officials estimated that “the total volume of trade in goods between China and the countries along the routes has exceeded US$7 trillion” since the start of the project in 2013.

Foreign policy analysts have been concerned not only about the Chinese government’s obvious economic ambitions, but also the geopolitical and strategic advantages that the project would bring to the People’s Republic. Alternatively, this could be a way for China to increase its “soft power” political presence across a well-connected Afro-Eurasian landmass (that is home to 88 percent of the world’s population) by exploiting their economic ties with countries indebted to China.

But these plans have a cost—a cost that is hard to reconcile with environmentalism. According to the Brookings Institution, the Belt and Road Initiative could be the single largest source of growing carbon emissions in the next few decades, as over half of the projected new sources of emissions will come from infrastructure; the Belt and Road Initiative will account for about 60 percent of global infrastructure development. It’s odd that Oak is funding such a carbon-heavy project in Eurasia when it spends so much money suing western energy companies. Of course, Oak justifies its giving as an effort to reduce the projected carbon emissions caused by the Belt and Road by “greening” it.

Many other players are involved in this “greening” of the Belt and Road. In November 2018, the China Society for Finance and Banking’s Green Finance Committee joined forces with the City of London’s Green Finance Initiative to produce a list of environmentalist principles that they promised to follow in financing the project going forward. In 2018, the UN joined the effort, namely to “consider strengthened collaboration among UN entities” in the attempt to reduce the Belt and Road Initiative’s effect on the environment.

In collaboration with UN Environment and 20 other U.N. agencies, China announced the creation of the Belt and Road Initiative International Green Development Coalition (BRIGC), which aims to “help recipient countries use Belt and Road investments to achieve the Sustainable Development Goals.” ClimateWorks, one of the Oak Foundation’s Belt and Road proxies, also explains that they have agreed to contribute to the financing of the Initiative because it could “potentially” be “an engine for low-carbon development.”

In light of data like this, Jane Nakano, a senior fellow of the Center for Strategic and International Studies, expressed strong skepticism about the rhetoric of environmentalism surrounding the Belt and Road Initiative, and said the attempts by the U.N. and the Chinese government to rebrand the project with a “greening” effort should be seen as a case of “greenwashing,” likening the Initiative’s environmental forum to a “useful customer relations occasion for Beijing.” She also pointed to the fact that the Silk Road Fund, established by the Chinese government to finance the Belt and Road, invested in fossil fuel projects for 90 percent of its energy sector investments. The Chinese government has also spent $15 billion on coal projects abroad.

So, if it’s unlikely that the Belt and Road project will ever become eco-friendly, why would organizations like the Oak Foundation and its proxies (ClimateWorks, World Wide Fund for Nature, and the Global Environmental Initiative) contribute to the cause?

A closer look at the individuals involved in the project show that they are deeply connected with global development projects through NGOs and foreign governments. They stand to gain enormous profit through shares and dividends on the completed projects.

For example, before becoming president of the Oak Foundation in January, Douglas Griffiths served as the U.S. representative to the U.N. Human Rights Council. Kristian Parker, the son of Oak Foundation founders Alan Parker and Jette Parker, lives in Geneva and has overseen Oak’s environmental program since 1998. He is also on the board of ClimateWorks. (It should also be noted that Alan Parker made his fortune as the CFO of a luxury goods retailer in Hong Kong. His net worth is estimated to be around $2 billion.)

The World Wide Fund for Nature, which boasts a revenue higher than $200 million, partnered with the U.N. Carter Roberts, WWF’s president, is on the advisory board of the Sustainable Energy for All, which has “close links with the U.N.,” including an official partnership.  Its CEO Rachel Kyte is co-chair of U.N. Energy. The Global Environmental Initiative is headquartered in Beijing, and collaborates with the Chinese government on various projects—it has even trained government officials in policy creation.

The connections go on: the further into this one looks, the wider the labyrinth of donor connections, recipient connections, U.N. relationships, and Chinese government partnerships appears.

These connections result in a significant advantage for the Chinese.

The American and Canadian companies operating without the same level of government involvement find themselves on the receiving end of lawsuits. But the Belt and Road has a substantial carbon footprint of its own and is backed by a country with an authoritarian government guilty of committing human rights violations. It sure is convenient that most of the people involved stand to profit from China’s growing influence. Instead of competing in the market, these faceless, post-national managers masquerading as philanthropists are using governmental favors and lawsuits to get ahead of the western capitalists while tacitly permitting the Chinese Communist Party to disregard human rights.

Too much money, too many jobs, and too many friendships are involved in this project. The environmental hypocrisy is also too large for an organization like the Oak Foundation to ignore. If Oak really intends to “green” the Belt and Road, then it should be more forgiving of western energy companies. However, it seems more likely that Oak and its proxies are willing to put profit before the planet—as long as it doesn’t benefit the United States.