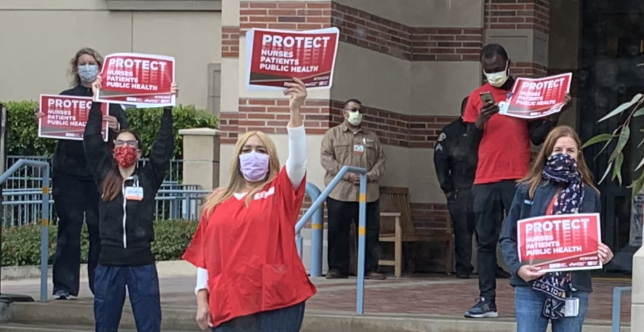 For all the harm they do, pandemics such as COVID-19 at least shine a light on the crucial expertise and bravery of healthcare professionals, giving people in the United States the rare opportunity to really pause and consider the heroic job these people do during times of public health crises.

Official reports indicate that dozens of healthcare workers have died in the pandemic. This should be a time of mourning and respect for those who have fallen and those still in the line of fire.

But leave it to Big Labor to swoop in at such a fragile time and exploit the very real crisis (which has become something of a progressive modus operandi) to advocate for their socialist policy ideas. By muddying the waters and sowing discord in the ranks of nurses themselves, while creating a fictional public opposition to their work, labor unions hope to sell the centralized version of healthcare that Big Labor favors: “Medicare for all.”

Organized nursing protests are already happening in states around the country organized by the biggest nurses’ union in the country, National Nurses United. Working in conjunction with smaller, state-based unions, the NNU has begun organizing nurses in protests over what they say is a lack of top-shelf personal protective equipment and a flagrant government dismissal of deaths in their ranks as a result of the shortage.

The NNU, which calls itself the “largest union and professional association of registered nurses in U.S. history,” released a statement on April 6 essentially demanding “the government act now to give nurses optimal personal protective equipment—including N95 respirators or higher” and to “stop treating nurses as if their lives are expendable.”

It is, of course, hard to argue that nurses shouldn’t have the best equipment as they battle on the front lines of a pandemic. And it would be detestable indeed if the American government considered nurses’ lives to be without value. It’s hard to imagine anyone disagreeing with those statements.

But a deeper read into the release clarifies that the seemingly rational demands are actually a cover for what the NNU really wants: a standardized healthcare provision such as “Medicare for all,” a program the union openly advocates for right on its website.

The NNU April release gets to the point laboriously, but using typical union language wrapped in panic and discord.

“We now bear the full brunt of a healthcare system rendered dysfunctional after years of relentless funding cuts for public health, while generating obscene profits for corporate interests,” writes New York State Nurses Association President Judy Sheridan-González. “Life-protecting, life-saving equipment should have been assembled, trained practitioners should have been mobilized en masse, infrastructure should have been up and running, arming us with the tools to confront the most devastating crisis of our lifetime. And now, late to the game, we must demand that our government make herculean efforts to prevent its spread, to treat its victims, to protect caregivers who place themselves directly in harm’s way, and to pull ourselves out of this abyss—or we are doomed.”

NYSNA, working in concert with the NNU, was involved in a protest this week in New York in which nurses marched in front of Lincoln Hospital and carried signs reading, “We work sick, you get sick” and “Patients before profits.”

Minnesota Nurses Association Executive Director Rose Roach, who is with a group working at the state level on the NNU’s larger protest strategy, is even more direct in her quotes about the ultimate goals of the current nationwide nurses’ protest.

“What nurses see is every hospital operating in haphazard fashion,” she said. “No hospital is using the same protocols. No hospital is maintaining the same procedures. They operate differently, day to day, and even shift to shift. For the lives of our nurses, for the lives of our patients, we have to provide the optimal protection for healthcare workers. We need the best. Not the second best. We can’t afford these chances hospitals are taking with our lives.”

It’s a conflation of two issues, of course: acquisition of quality equipment and standardized healthcare provision. But that’s how exploiting crises works.

Missouri State Rep. John Wiemann, whose own state has a nurses’ union that is also working with the NNU as it stages protests in local hospitals, wrote an opinion article for the Missouri Times on April 14 acknowledging the NNU’s attempt to “take advantage of the moment when they think no one is looking.”

“We need to be encouraging the government at all levels to step up and get the production of these [PPE] resources kicked into high gear. Protesting your local hospital won’t get that done, and dividing the medical community and pitting nurses against hospitals is just wrong. As we face the toughest days, we must remain united and resist polarizing the pandemic,” he said.

What Wiemann leaves out of his article is what the NNU hopes to promote during the chaos: “Medicare for all.” And if nurses aren’t vigilant, the NNU’s organizational efforts will last long after the crisis is passed, because unions will hold power over nurses in near perpetuity thanks to the “one man, one vote, one time” organizing election principle.

If America and its nurses are smart, they’ll keep their eyes open and reject Big Labor’s attempt to use the coronavirus crisis to take control of a crucial part of healthcare provision.

This article first appeared in the Washington Examiner on May 7, 2020.