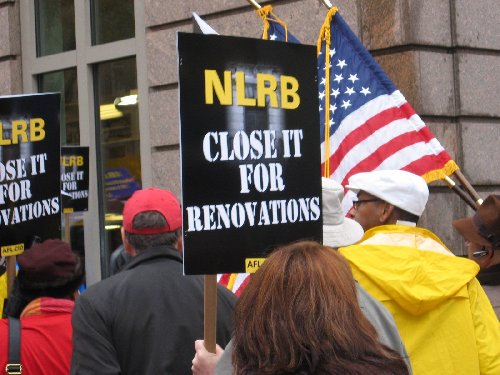 Perhaps no business model more thoroughly represents the widespread prosperity of the American free enterprise system than the franchise. This engine of the free market has arguably done more to create jobs, lift Americans out of poverty, and encourage racial equality than any government employment or civil rights program. Yet the five-member National Labor Relations Board (NLRB) under the Obama administration assaulted this business model, attacking both franchisees’ independence and the licensing companies’ ability to subcontract.

The recently passed Save Local Business Act seeks to redress this. The bill reclarifies the definition of the employer-employee relationship to grant “direct, actual, immediate,” and “significant” control over the terms and conditions of employment, putting power back in the hands of workers and employers. The bill passed the House of Representatives with bipartisan support on November 7 by a vote of 242-181.

The Obama administration delivered unprecedented power to Big Labor. As CRC’s Michael Watson notes his Labor Watch series “Under New Management,” Scott Brown’s election to a vacant Massachusetts Senate seat in January 2010 ended Democrats’ filibuster-proof majority, frustrating their ability to pass pro-union legislation. Labor unions—seeing an opportunity—then turned their focus away from pushing favorable legislation through Congress towards the NLRB. According to one estimate, “4,559 years of cumulative precedents were reversed by Obama’s efforts.”

Franchising came under fire from two particularly egregious rulings in 2015, which redefined the critical difference between an employer and a so-called “joint employer.”

The NLRB Office of the General Council ruled that McDonald’s could be held as a full employer for the workers employed in its roughly 14,000 franchised stores. This opened the door for lawyers of aggrieved employees to target the McDonalds corporation, rather than the local franchisees who work directly with the employees. As David Agnew writes in a 2015 Labor Watch:

In the franchise model, the national or regional corporate franchisor provides the hotelier, restaurateur, or other business operator with a brand, a logo, a product, or service standards, marketing, and tools such as a hotel reservation system. In exchange, the franchisor is paid a royalty, and the franchisee has the power to run the business the way he or she likes. The corporation does not micromanage the franchisee’s decisions about who will be the shift supervisor, who needs to cover for a sick employee, or when the floors get mopped.

In 2015, the NLRB also ruled that Browning-Ferris Industries (BFI), a waste management company, had to allow the International Brotherhood Teamsters, which represents its own workers, to file a petition to represent the contract workers, who were under the direct employment of Leadpoint Business Services, a staffing agency. Many companies like BFI rely on similar contract companies to complete temporary projects or supplement their workforce. By allowing unions free rein with these contract employees that companies like BFI exert no direct control over, the NLRB made it harder for companies to subcontract, which leads to fewer jobs and lower economic growth. The NLRB carried out this scheme by expanding the definition of “direct” and “indirect” control. The new ruling read:

This means that the NLRB could hold a small business owner who negotiates a contract with a lawn service company responsible for the subcontractor’s workers because the business owner indirectly pays their wages. This contrasts sharply with the clearer definition of a joint employer established in 1984, which stated that the brand company’s control over employment must be “direct and immediate.”

Rep. Bradley Byrne (R-AL), who introduced the Save Local Businesses Act, practiced labor and employment law as an attorney for decades. He points out how the new NLRB rules have made it harder for even labor attorneys to agree on the exact definition of “indirect” or “potential” control over an employee. “Imagine how confusing it is for Main Street businesses to understand and follow,” he says.