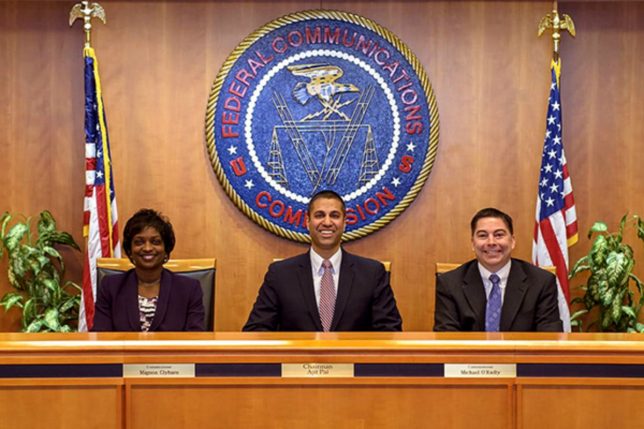 Despite a bomb threat and angry protesters, the free speech-hating Left couldn’t stop the Federal Communications Commission (FCC) from ending net neutrality and restoring Internet freedom. It’s a major victory for free speech online, and a huge defeat for the cabal of wealthy special interests and Marxist mediapoids who have backed the net neutrality campaign since the 1990s.

From the start, net neutrality was a scheme devised by neo-Marxists like Robert McChesney to give control of the Internet to Big Government. The Obama FCC even cited arguments by McChesney’s group, Free Press, a whopping 46 times in its push for net neutrality in 2015.

Through Free Press, McChesney helped to coordinate this campaign with millions of dollars from liberal billionaire George Soros’ Open Society Foundations and the Ford Foundation in an effort to put free speech in the hands of the FCC. As CRC president Scott Walter wrote, McChesney and his allies claimed the regulations

were needed to ensure internet service providers do not harm advertisers and consumers by manipulating internet service — slowing it down or speeding it up for some users, or blocking access to particular domains.

Proponents argued that privately owned ISPs can’t provide a fair service to customers—despite doing just that for over 20 years—so Big Government should take over the Internet. In Walter’s words,

[t]he underlying justification goes something like this: “We can’t trust consumers to know what’s best for themselves, or businesses to provide it, so the government will take everything over.”

Make no mistake: McChesney is an avowed socialist and authoritarian, not a warrior fighting for Internet users. He believes that “[o]nly government can implement policies and subsidies to provide an institutional framework for quality journalism.” Among his recent works are Blowing the Roof off the Twenty-First Century: Media, Politics, and Post-Capitalist Democracy, and Digital Disconnect: How Capitalism Is Turning the Internet Away from Democracy. As I noted in The Left’s Low Power Coup, McChesney sees “capitalism [as] an evil propagated by U.S. mainstream media” sources – and the solution is a government takeover:

He had substantial help from wealthy special interests. As John Fund noted in the Wall Street Journal, the net neutrality campaign was largely the product of the same left-wing foundations and lobbyists responsible for the free speech-stifling 2002 McCain-Feingold campaign finance reform law. Eight liberal foundations (such as Pew Charitable Trusts) gave $123 million to fund the illusion of a “mass movement” for campaign finance reform. After 2002, they shifted focus towards net neutrality in order to give control of the Internet to the federal government.

Let’s be clear: net neutrality was never about keeping the Internet “neutral” – it was always about silencing free speech by any means necessary.

Backers tried to push net neutrality bills through Congress three times from 2006-2008. They all failed. In 2010, they turned to the Obama FCC to create new rules usurping control of the Internet… and lost in federal appellate court. So the FCC changed tactics: in 2015 it simply reclassified the Internet under a decrepit 1930s public utility regulation – a law designed to regulate things like telephone monopolies a full 60 years before the invention of the Internet.

The Trump FCC voted on December 14 to pass the “Restoring Internet Freedom Order,” repealing the Obama administration’s 2015 net neutrality regulations. According to FCC documents, the rule will undo the “heavy-handed, utility-style regulation” on Internet service providers (ISPs) and return to the “vibrant and competitive free market… unfettered by Federal or State regulation” established by President Bill Clinton and a Republican Congress in the mid-1990s. Specifically, it reclassifies the Internet as an “information service” and removes it from the decrepit 1930s public utility regulation established by the Obama FCC.

As the FCC noted, since net neutrality regulations were put in place broadband investment has fallen for two years in a row, “the first time that that’s happened outside a recession in the Internet era.”

By returning control of the Internet to users and the free market, though, the FCC’s decision has done more than help the Internet grow: it’s preserved free speech online.