Moynihan: New York, Washington to be under water by the Year 2000

I wrote last week that, based on then-recent trends, my office would soon be the temperature of liquid nitrogen and Washington, D.C. would be colder than Pluto.  I now realize that I was in error.  What I should have written was that, by the Year 2000, my office in Washington will be under water.

OK, that’s not what happened.  But it is what the Warmers predicted.

Here’s a 1969 memo, written in the White House by a top aide to President Nixon, Daniel Patrick Moynihan, to Nixon advisor John Ehrlichman.  (Click on the image for a pdf version of the memo.) 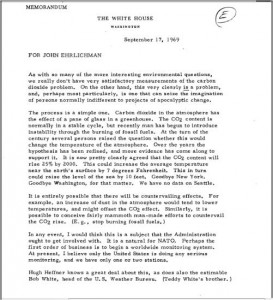 As with so many of the more interesting environmental questions, we really don’t have very satisfactory measurements of the carbon dioxide problem. On the other hand, this very clearly is a problem, and, perhaps most particularly, is one that can seize the imagination of persons normally indifferent to projects of apocalyptic change.

The process is a simple one. Carbon dioxide in the atmosphere has the effect of a pane of glass in a greenhouse. The C02 content is normally in a stable cycle, but recently man has begun to introduce instability through the burning of fossil fuels. At the turn of the century several persons raised the question whether this would change the temperature of the atmosphere. Over the years the hypothesis has been refined, and more evidence has  come along to support it. It is now pretty clearly agreed that the C02 content will rise 25% by 2000.  This could increase the average temperature near the earth‘ s surface by 7 degrees Fahrenheit. This in turn could raise the level of the sea by 10 feet. Goodbye New York. Goodbye Washington, for that matter. We have no data on Seattle.

It is entirely possible that there will be countervailing effects. For example, an increase of dust in the atmosphere would tend to lower temperatures, and might offset the C02 effect. Similarly, it is possible to conceive fairly mammoth man-made efforts to countervail the C02 rise. (E. g., stop burning fossil fuels. )

In any event, I would think this is a subject that the Administration ought to get involved with. It is a natural for NATO. Perhaps the first order of business is to begin a worldwide monitoring system. At present, I believe only the United States is doing any serious monitoring, and we have only one or two stations.

Hugh Heffner knows a great deal about this, as does also the estimable Bob White, head of the U.S. Weather Bureau. (Teddy White’s brother.)

Well, at least Seattle has a chance.

Moynihan, who would later serve four terms as a U.S. Senator from New York (elected on the Liberal and Democratic tickets), was considered a liaison between Nixon and the academic world.  He was called Nixon’s “house intellectual.”

“Hugh” Heffner was Hubert Heffner, deputy director of the Office of Science and Technology.  He replied to the Moynihan memo: “The more I get into this, the more I find two classes of doom-sayers, with, of course, the silent majority in between.  One group says we will turn into snow-tripping mastodons because of the atmospheric dust and the other says we will have to grow gills to survive the increased ocean level due to the temperature rise.” (FYI, the Teddy White mentioned in the memo was the journalist famous for his Making of the President books.)

Heffner was right.  This is a prime example of how pseudoscientific doomsaying works: One group says we’re facing an approaching Ice Age; the other says we’re facing catastrophic global warming.  If temperatures go down, the Ice Agers are seemingly proven right.  If temperatures go up, the Warmers are seemingly proven right.  If – as has actually occurred – temperatures go up and down in patterns that go back hundreds of millions of years… well, that’s just proof of “climate change.”  Interestingly, micromanagement of the economy by bureaucrats and politicians is offered as the cure for what ails us, whether the disease is cooling, warming, or both cooling and warming.

When a preacher predicts the end of the world and it doesn’t happen, people ridicule him.  Remember Pastor Harold Camping’s prediction for May 21, 2011, which his organization famously displayed on billboards? 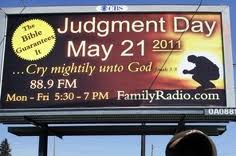 If only Pastor Camping switched his field from theology to environmentalism, he’d have most members of the media/political elite declaring that he was right all along, despite all the evidence to the contrary (such as, for example, the fact that we’re all still here).

Going Postal: How the Left Will Use Vote by Mail to Federalize Elections