Meet the Socialists Behind the Abolish ICE Campaign 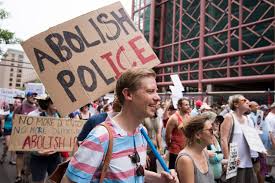 U.S. Immigration Customs and Enforcement, or ICE, is under fire—literally.

On August 13th, unidentified attackers fired several shots at the agency’s office in San Antonio, Texas (fortunately, no one was injured). The next day, footage emerged of radical activists from the groups Never Again Action and Black Lives Matter threatening the lives and families of private employees of the GEO Group, a private contractor used by ICE.

One protester screamed, “We know where you sleep at night!” ICE itself blamed the shootings on violent “political rhetoric” against the Trump administration—and with good cause.

Almost since President Trump’s inauguration in 2017, the far Left has howled for the dismantling of the agency responsible for enforcing America’s immigration laws. That campaign coalesced around the phrase “Abolish ICE,” which leading Democrats now echo.

But he isn’t the only Democrat running for president in 2020 on an anti-ICE platform. In fact, the left-wing website Vox keeps a running list of prominent Democratic politicians who’ve called for the dismantling of the agency.

Sen. Elizabeth Warren (D-MA), for instance, called for “replacing ICE with something that reflects our values.” And Sen. Kirsten Gillibrand (D-NY) was the first sitting U.S. Senator to join the Abolish ICE campaign last June (she later tried to walk back her position).

Egged on by irresponsible politicians, it isn’t hard to see why extreme leftists moved from rhetorical attacks to physical violence against ICE officers. But where did the Abolish ICE movement come from?

The phrase itself dates back to 2003 when the new Department of Homeland Security created the agency. But it moved from the fringe to the mainstream in February 2017, thanks to the efforts of two Millennials: Sean McElwee and Arielle Swernoff.

That’s roughly when McElwee and Swernoff created the website AbolishICE.org. While the site is now defunct, the WayBack Machine credits them as its founders and identifies a handful of senior advisers: Greg Greene, a former Democratic National Committee (DNC) staffer; Antonio Alarcon, a member of the extremist immigration group Make the Road New York; Juhem Navarro-Rivera, a political consultant and senior fellow for the left-wing Institute for Humanist Studies; and Rabyaah Althaibani, a former Democratic campaign staffer and anti-Trump political activist.

The group’s mission minces no words:

Our goal is to abolish ICE and create an immigration system divorced from white supremacy, and that respects the dignity of all human beings. We are doing this by mainstreaming the idea in political discourse, pushing current elected officials and candidates to adopt abolishing ICE as part of their platform, and partnering with organizations and individuals who are at the frontlines of immigration advocacy and supporting immigrant communities [emphasis added].

Sean McElwee, a socialist, leads the rhetorical assault on ICE. Last March, he wrote a rabid attack on ICE in The Nation, claiming that the agency’s “tactics are philosophically aligned with racist thinkers like Richard Spencer,” adding:

The call to abolish ICE is, above all, a demand for the Democratic Party to begin seriously resisting an unbridled white-supremacist surveillance state that it had a hand in creating.

“It’s time to rein in the greatest threat we face: an unaccountable strike force executing a campaign of ethnic cleansing,” McElwee concluded, drawing a bizarre and sickening comparison of ICE to white supremacy.

But McElwee is hardly stuck on the political fringe; he’s a regular contributor to liberal news and commentary websites such as the Atlantic, Vox, the New York Times, and the Washington Post.

The usually even-keeled Politico even ranked him #41 of its annual Top 50 influencers of 2018 “for birthing ‘Abolish ICE.’”

Naturally, McElwee has praised Ocasio-Cortez, Gillibrand, and other Democrats for adopting that mantra. Ocasio-Cortez has praised him in turn: “The idea of abolishing ICE was borne [sic] out of activist and immigrant communities . . . . [but] in order to turn this idea into a government policy, we need change agents like Sean McElwee.”

McElwee is a former policy analyst for the advocacy group Demos and co-founder of Data for Progress, an unabashedly far-left group that pushes for Medicare-for-All, the abolition of ICE, and the Green New Deal. In fact, Data for Progress’s website brags at least 15 times about McElwee’s role in popularizing the Abolish ICE message.

“We’re a think tank that isn’t in the traditional mold of think tanks,” McElwee has said, and he’s right. That’s because Data for Progress isn’t a 501(c)(3) public charity like typical think tanks—in fact, it’s not even an IRS-recognized nonprofit.

Data for Progress is actually a project of the Tides Advocacy Fund, according to its donation page. As I’ve written before, Tides Advocacy is the 501(c)(4) lobbying arm of the Tides Foundation, a “dark money” pass-through—funneling millions of dollars to left-wing political causes without revealing its donors.

The Tides Foundation claimed that it “does not subsidize The [Tides] Advocacy Fund in any way,” yet it’s granted at least $5.7 million to the lobbying group since 2010, according to data from the service FoundationSearch. In that light, Data for Progress should rightly be called a lobbying shop nestled within a “dark money” heavyweight.

Sean McElwee and Arielle Swernoff should be branded extremists for their outrageous slurs of ICE, accusing the agency of perpetrating crimes against humanity. Instead, the supposedly “mainstream” media has lauded the “Abolish ICE” crowd as heroes—with potentially deadly consequences for ICE officers.