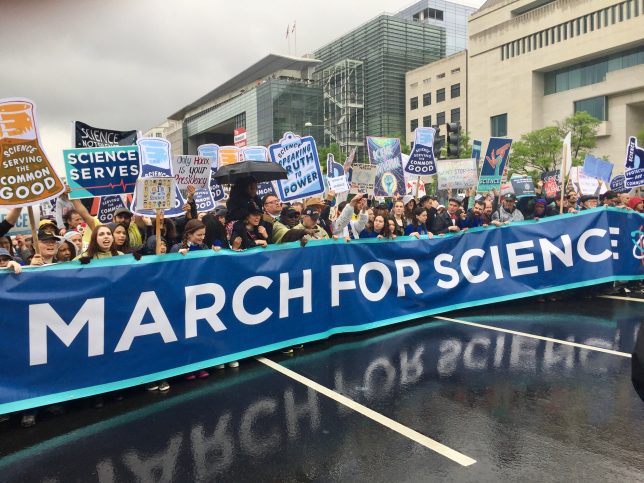 Summary: The American Association for the Advancement of Science (AAAS) is the largest general science organization in the world; judging by the accomplishments of many of its members, it has contributed widely to our understanding of science and technology. But the association also has a long and painful history of “science-activism”—promoting ties to Marxist and other extremist groups, propounding junk science theories, and supporting draconian population control policies.

What if I told you there was an association that has a history of fraternizing with the Soviet Union, whose leadership once called for a totalitarian world government, and today promotes far-left political activism against conservatives, Christians, and traditional values? You might respond that there’s no shortage of such groups, big or small.

But what if I told you that this same group touted itself as the largest nonpartisan scientific society in the world?

Meet the American Association for the Advancement of Science, or AAAS, which claims it wants to “advance science, engineering, and innovation throughout the world for the benefit of all people.” Admittedly, judging by the feats of its 120,000 members—among whom are counted many distinguished scientists—AAAS has helped innovators improve our understanding of technology and the Earth.

Unfortunately, there’s a darker side to the association’s supposedly “nonpartisan” activism that stains the 171-year-old organization in radical politics and fuzzy science; worse, its origins date back to disturbing theories behind eugenics, population control, and the rejection of mainstream values.

The American Association for the Advancement of Science was founded in 1847 in Boston by a number of geologists and naturalists, and held its first meeting the following year at Philadelphia’s Academy of Natural Sciences. As the first national organization unifying scientists across all fields in the United States, it was created with the goal of raising further resources for scientific inquiry. The group grew from its initial 78 founding members to over 2,000 by 1860; and while the outbreak of the Civil War closed it down temporarily, it was revived in 1866. It began to grow rapidly as barriers fell and non-scientists joined the AAAS, as well as practicing “elected fellows.”

In 1900, the AAAS took over publication of Science (sometimes referred to as Science Magazine), a weekly peer-reviewed journal originally created in 1880 with financial assistance from Thomas Edison and Alexander Graham Bell. The journal is still published today; in 2014, the last year for which statistics are available, circulation stood at roughly 570,400.

In the first decades of the twentieth century, AAAS began to shift away from funding advocacy for science toward policy activism. This was met with some internal disagreement. A 1919 meeting of the AAAS in St. Louis, Missouri, passed a resolution that “scientific men should not discuss matters relating to acute political questions on which public opinion is divided.” Throughout the interwar period, the AAAS mostly encouraged scientists to stay aloof from politics. That opinion began to change in the 1920s, however. As one more policy-minded member wrote in Science in January 1920, scientists have a duty “to throw the light of truth on the field of political discussion.” He continued:

He [the scientist] may find honest people doubting his integrity or his intelligence. He himself is only too well aware of his liability to error. But in the face of all this, he must and should persevere, knowing well that his feet are set upon the path of progress.

This melding of science and politics rapidly gained ground in the lead up to World War II. In 1938, the AAAS elected Harvard Medical School physiologist Walter Bradford Cannon as annual president. Cannon, a Soviet sympathizer, was a leading voice in a number of vaguely scientific, politically fashionable organizations, including the Medical Bureau to Aid Spanish Democracy, a volunteer association of American doctors and nurses who aided the leftist Spanish Republican Army during the vicious Spanish Civil War of 1936-39. (That army received the equivalent of $405 million in modern U.S. currency and hundreds of small arms, war materiel, artillery, tanks, and aircraft from the Soviet Union.) In 1935, the year before the Spanish Civil War broke out, Cannon visited the Soviet Union, where he purportedly made “friendly remarks” about the repressive communist country, then ruled by Joseph Stalin. In 1943, Cannon became president of the American-Soviet Medical Society, which promoted closer relations with the USSR, until its dissolution in 1949 with the start of the Cold War, due to lack of funding. (It’s worth noting, too, that at this time the FBI responded to the overt Marxism of many AAAS leaders by opening a 700-odd-page file on the organization.)

Under Cannon, the AAAS began to express sympathy for the Soviet Union as a model of the scientific economy and society of the future. Capitalism, meanwhile—which they argued had supposedly culminated in the racialism of National Socialist Germany—was criticized as primitive. According to historian Peter. J. Kuznick, these science-activists viewed the United States during the Great Depression as:

a nation of alienated victims, lacking control over their destinies, [whereas] the Soviets appeared to be a nation of self-conscious individuals, willfully and deliberately constructing a rational, humane society. Instead of the moral hebetude and obliquity of avaricious bourgeois civilization, the Soviets projected universal sodality predicated on individual contribution to the common good. Instead of saturnine pessimism and the yearning for the satisfactions of bygone days, the Soviets extended the hope of a new world.