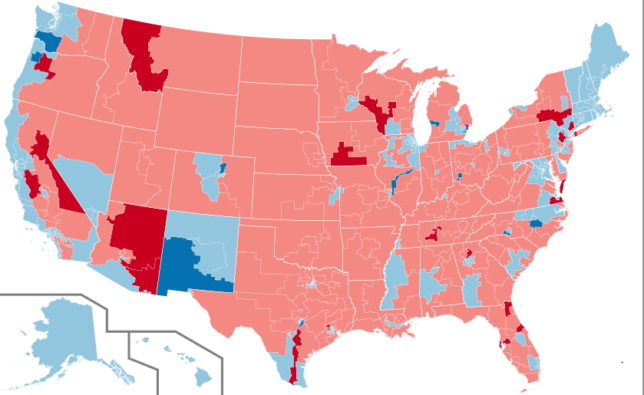 Despite recapturing the majority in the U.S. House of Representatives, Republicans were disappointed by the outcome of the midterm elections. Instead of a “red wave” sweeping GOP candidates into offices across the country, Democrats gained “trifectas” (that is, control of the governorship and both houses of the state legislature) not only in blue Maryland, Minnesota, and Massachusetts but also usually competitive Michigan. Instead of losing control of Oregon, Democrats broke Republican control of Arizona. Instead of losing control of the Senate, Democrats gained a true majority by winning a runoff election in Georgia.

As I write, the Cook Political Report national House vote tracker, as close as exists to a collation of the “national popular vote” for the House of Representatives, shows Republicans winning just over 50.5 percent of the vote, with Democrats winning just under 48 percent, or “R-plus-2.5” in election-watcher speak. As a result of the elections, Republicans will hold 222 seats to Democrats’ notional 213—one safely Democratic seat will start the 118th Congress vacant because Rep. Don McEachin (D-VA) died after the election.

That “popular vote” margin exceeds the margin Republicans won in 2016 (in which they won 49.1 percent to Democrats’ 48 percent), but Paul Ryan’s Republican caucus then had 241 members, whereas now Kevin McCarthy’s caucus will enjoy only 222. Part of the loss is likely due to changes related to redistricting—Capital Research Center’s “Myth of Non-Partisan Districts” found that the 2016 GOP won 21 more members than proportional representation by state would predict. While an analysis of seats-above-replacement will have to wait for final certified counts (watch this space, as all wait for California), the GOP cannot expect the 2020 redistricting cycle to profit the seats-above-replacement it enjoyed from 2012 through 2016.

Those seats-above-replacement had already disappeared in the 2018 and 2020 elections, and it is worth recapitulating why before moving on to the potential effects of the post-2020 redrawn congressional districts. Aggressive maps drawn by Republicans elected in Virginia’s 2009 elections, Florida’s 2010 elections, North Carolina’s 2010 elections, and Pennsylvania’s 2010 elections were redrawn by courts. In Pennsylvania’s case, the map was redrawn by a state supreme court elected with support from the political machine of now-convicted union boss “Johnny Doc” Dougherty. A Republican-favoring map in New Jersey flipped to favoring Democrats as educated, wealthy, socially moderate Republican voters left the party of then-President Donald Trump, a classic case of a “dummymander,” or flubbed gerrymander.

Republicans also went into the 2020 redistricting cycle in some ways in the opposite position of the post-2010 GOP. When a party wins the last midterm election in a census cycle (as the GOP did in 2010 and Democrats did in 2018), it holds more governorships, state-government trifectas, and elected state judgeships, which in turn gives that party more influence over redistricting. GOP losses in Maine, Pennsylvania, Michigan, Wisconsin, and Nevada ensured maps drawn in those states would not be as favorable to Republicans as maps drawn by their 2010-era governments.

Indeed, Republicans got lucky in some states. By adopting redistricting commissions, Colorado, New York, and Virginia ended up denying their Democratic trifectas the power to redraw their state congressional maps in full.

Part of the wave dissipated on the House battlefield map, but other parts fell to Republican aversions to mail-in and early voting in large parts of the country. Those aversions are not unfounded. As Capital Research Center’s Hayden Ludwig has observed, the left-wing approach toward mail-in voting contradicts the recommendations of the mid-2000s bipartisan Carter-Baker Commission, which was named for Democratic former President Jimmy Carter and Republican former Secretary of State James Baker III and supported by funding from a number of left-wing foundations. Ballot harvesting or ballot trafficking, a practice in which third parties collect and transport completed ballots to polling stations or drop boxes, is particularly disturbing, because it creates an obvious appearance of opportunity for election fraud. That is why the Carter-Baker Commission opposed it: “State and local jurisdictions should prohibit a person from handling absentee ballots other than the voter, an acknowledged family member, the U.S. Postal Service, or other legitimate shipper, or election officials,” the 2005 commission report stated. The report added, “The practice in some states of allowing candidates or party workers to pick up and deliver absentee ballots should be eliminated.”

But what happens when bad systems are the law? Republican candidates in Arizona, Michigan, and Pennsylvania might have lost anyway, but they were not helped by the overwhelming margins their Democratic rivals won among mail-ballot voters.

Yet two of the brightest states for Republicans were Florida and California, states that have longstanding mail-in voting practices, and a third was New York, which adopted liberal mail-in voting practices more recently. In Florida, Gov. Ron DeSantis and Sen. Marco Rubio romped to landslide re-elections in what was until recently a swing state. California Republicans defended seats that had voted for President Joe Biden by over 10 points and picked up a net seat, despite the state losing a seat to reapportionment, and New York Republicans added three new House seats while defending their existing blue-turf seats.

So one significant difference between states where Republicans succeeded and states where they did not was the Republicans’ approach to mail-in voting. California Republicans, for instance, had learned from bitter experience in their 2018 midterm election losses. In that election, the state’s ruling Democrats surged to victory with help from legalized ballot trafficking and widespread mail-in voting. Republicans offered up principled objections to those practices . . . and lost seven seats, halving the California Republican House delegation to a seven-seat rump. In 2020, the state GOP decided to take Coach Edwards’s advice and “play to win the game,” so they set up a ballot harvesting operation. California’s Republican National Committeewoman, attorney Harmeet Dhillon, told National Review in 2020 “it’d be political malpractice not to do it where the other side is doing it, and the other side has done it effectively.”

In 2020, the California GOP took back four of the seven lost seats and held all those seats in 2022—even seats that had voted for President Biden by over 10 points. With John Duarte’s win in the Central Valley, the state party gained back its fifth of the lost seats, despite California having lost a seat in the 2020 Census reapportionment of national House seats.

This kind of maneuvering resembles the competitions in Formula One racing. Each car’s team tries to find ways to beat the competition, say by finding an aerodynamic tweak that betters the chance of victory. The “laws” governing what Formula One teams may do to their cars are complex, like election laws. So when one team’s tweak gives it an edge, two things happen: The other teams go to the governing authority, criticizing the winning team and often arguing it has broken the rules, but at the same time, those teams also begin engineering ways to incorporate the new advance into their own cars.

This phenomenon recently appeared in California after the GOP started its own ballot-trafficking operations and clawed back a substantial share of its past losses. The response from California Democrats? Like the Formula One teams who have demanded the sport’s sanctioning body crack down on “copycat” tactics, California Democrats have challenged the use of drop boxes set up by Republicans in Orange County.

This brings us back to Coach Edwards’s legendary press conference. Billionaire left-leaning foundations, practicing Big Philanthropy (excuse me, “nonpartisan civic engagement”) are fueling a massive election machine. These donors have built up a voting infrastructure that helps the Democratic Party win elections and advance left-wing policies. Even the federal government’s Census Bureau, whose count of Americans governs how many congressional seats each state will have, is influenced by Big Philanthropy. The Funders Committee for Civic Participation—whose members include donors like the foundations of George Soros and the Rockefellers, as well as political heavyweights like the AFL-CIO—spent years preparing to “get out the count” in liberal constituencies.

While it cannot be determined if the Funders Committee’s efforts caused it, the Census Bureau’s own research found that overcounts and undercounts of populations in the 2020 Census apportioned seats to “blue” Minnesota, Rhode Island, and Colorado that they did not deserve, while denying seats to “red” Texas and Florida. That result will not discourage future efforts by the Funders Committee and similar groups to “win” the Census through targeted efforts to turn out targeted constituencies.

Combine that with the massive infrastructure built to construct a voter pipeline from registration through issue advocacy to drop boxes for ballots, and the power of the Left’s institutional structure is obvious.

Can this election machinery be countered? Conservative charities mostly leave the voter registration and census turnout fields uncontested (except for occasional criticism of the left wing’s actions, which is ignored). But unilateral disarmament rarely leads to permanent peace on equal terms.

Political advocacy “innovation” has always followed the logic of an arms race. In the last century’s naval rivalries, pre-Dreadnought ships gave way to dreadnought battleships, which gave way to aircraft carriers. Likewise, the political action committee (invented by a labor union, the Congress of Industrial Organizations, to back Franklin D. Roosevelt) was copied. Similarly, the so-called “dark money” groups (mostly just 501(c)(4) advocacy organizations like Planned Parenthood and the National Rifle Association) were used by conservatives to great effect in 2010 before being copied by liberals in successive cycles. In like fashion, the Arabella Advisors model of an influence-management network has been copied, with conservative activist Leonard Leo explicitly saying he modeled the structure of his groups on Arabella’s structure.

Republicans already have begun to play the pushback game. They likely owe their House majority to successful litigation challenging Democratic gerrymanders in Maryland and New York, and Virginia Republicans who backed a ballot measure creating the state’s redistricting commission saw their gambit pay off as well. After Republicans took note of Democratic successes in state supreme courts like Pennsylvania’s, they made big, successful drives to take control of state courts in North Carolina and Ohio. But as Capital Research Center has shown, when it comes to “nonpartisan civic engagement” and charitable policy education, the conservative side is outspent nearly four-to-one. That is quite the resource gap, which means conservative donors will have a major role to play if the policies they wish to advance are to do so.