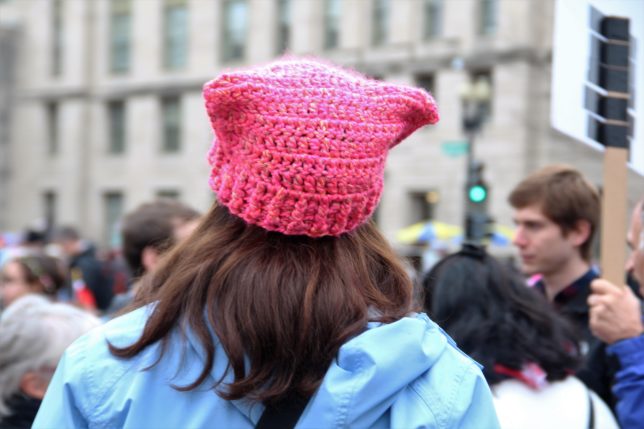 The Democratic National Committee (DNC) is one of the latest high-profile groups to have seemingly pulled its support for the Women’s March in advance of the group’s annual major demonstration in the nation’s capital scheduled for January 19. Women’s March Inc., the corporate parent of the demonstration, is still facing controversy surrounding its board members, their continued refusal to condemn Nation of Islam (NOI) leader Louis Farrakhan, and new charges of anti-Semitism.

Tali Goldsheft, who created a Change.org petition encouraging the sponsors of the Women’s March to revoke their support for the embattled group, was among the first to notice the change to the Women’s March website. An archive of the Google cache of the website as it appeared on January 13 still listed the DNC as a partner; however, its name has since been removed.

While no longer being directly affiliated with the national Women’s March group, DNC deputy communications director Sabrina Singh told the Jewish News Syndicate (JNS), “The DNC stands in solidarity with all those fighting for women’s rights and holding the Trump administration and Republican lawmakers across the country accountable. Women are on the front lines of fighting back against this administration and are the core of our Democratic Party.”

Other groups that have reportedly also distanced themselves from the Women’s March include the Southern Poverty Law Center (SPLC), the Human Rights Campaign (HRC), NARAL, Center for American Progress, and EMILY’s List. The NAACP was allegedly temporarily removed from the partner list before being re-added and reaffirming its support.

In a statement to Newsweek, SPLC spokesperson Jeff Migliozzi said the group “did not renew” its partnership when prompted. According to Migliozzi, the SPLC has “other priorities at the moment.” He did add, however, the SPLC would support marches “in the communities around us in the Deep South.”

According to the Daily Beast, “Less than half of the nearly 550 partners listed in 2018 have returned to support the third march.”

The dissociations come after pieces in Tablet and the New York Times shed more light on the leaders of the Women’s March, their relationship with the Nation of Islam, and their controversial and inflammatory comments about Jews.

It was there that, as the women were opening up about their backgrounds and personal investments in creating a resistance movement to Trump, Perez and Mallory allegedly first asserted that Jewish people bore a special collective responsibility as exploiters of black and brown people—and even, according to a close secondhand source, claimed that Jews were proven to have been leaders of the American slave trade. These are canards popularized by The Secret Relationship Between Blacks and Jews, a book published by Louis Farrakhan’s Nation of Islam—“the bible of the new anti-Semitism,” according to Henry Louis Gates Jr., who noted in 1992: “Among significant sectors of the black community, this brief has become a credo of a new philosophy of black self-affirmation.”

Ms. Wruble, a central organizer of the march, says she agrees that white women, including Jews, should grapple with their racial privilege. She put out a call for women of color to join the planning team and was connected with Ms. Mallory and Ms. Perez. At that first meeting, Ms. Wruble said, they seemed to want to educate her about a dark side of Jewish history, and told her that Jewish people played a large role in the slave trade and the prison industry.

“I was taken aback,” said Ms. Wruble in her first extensive interview about her experience organizing the Women’s March. “I thought, ‘Maybe there are things I don’t know about my own people.’”

She said she went home that night and searched Google to read about the Jewish role in the slave trade. Up popped a review of “The Secret Relationship Between Blacks and the Jews,” a 1991 book by Mr. Farrakhan.

At first, when speaking to Tablet, Mallory and co-president Bob Bland denied there was a conversation about Jews at that meeting. Speaking to the New York Times, Mallory admitted they did discuss Jews and their alleged role in supporting white supremacy: “Since that conversation, we’ve all learned a lot about how while white Jews, as white people, uphold white supremacy, ALL Jews are targeted by it.”

Evvie Harmon, another co-founder of the Women’s March, told Tablet she again overheard Mallory and Perez attacking Wruble for her Jewish heritage during a post-march debriefing meeting at Mallory’s apartment:

Tamika told us that the problem was that there were five white women in the room and only three women of color, and that she didn’t trust white women. Especially white women from the South. At that point, I kind of tuned out because I was so used to hearing this type of talk from Tamika. But then I noticed the energy in the room changed. I suddenly realized that Tamika and Carmen were facing Vanessa, who was sitting on a couch, and berating her—but it wasn’t about her being white. It was about her being Jewish. “Your people this, your people that.” I was raised in the South and the language that was used is language that I’m very used to hearing in rural South Carolina. Just instead of against black people, against Jewish people. They even said to her “your people hold all the wealth.” You could hear a pin drop. It was awful.

According to Harmon, she also witnessed board member Linda Sarsour making anti-Semitic comments.

Wruble said she was told Jewish women could not be at the “center” of the Women’s March because it might “turn off groups like Black Lives Matter.” Instead of pressing further, the New York Times piece simply claimed Black Lives Matter criticizes the “Israeli occupation.”

More than just taking Farrakhan’s word as if it were the truth about Jews, the pieces in Tablet and the New York Times also alleged another relationship between the Women’s March and the NOI. Tablet provided a screenshot of Sarsour with Fruit of Islam (FOI) members, who she said were “security for the movement.” Similarly, Wruble told the New York Times that leaders told her NOI was going to provide security for the march.

While appearing on “The View” earlier this week, Mallory yet again refused to condemn Farrakhan. When asked about attending NOI holiday Saviours’ Day, Mallory said, “I think it’s important to put my attendance, my presence at Saviours’ Day—which is the highest holy day for the Nation of Islam—in proper context. You know, as a leader, as a black leader, in a country that is still dealing with some very serious, unresolved issues as it relates to the black experience in this country, I go into a lot of difficult spaces.”