Don’t be fooled by the myriad groups with fierce names and slick websites like Demand Justice. They represent Beltway Big Money, not America. 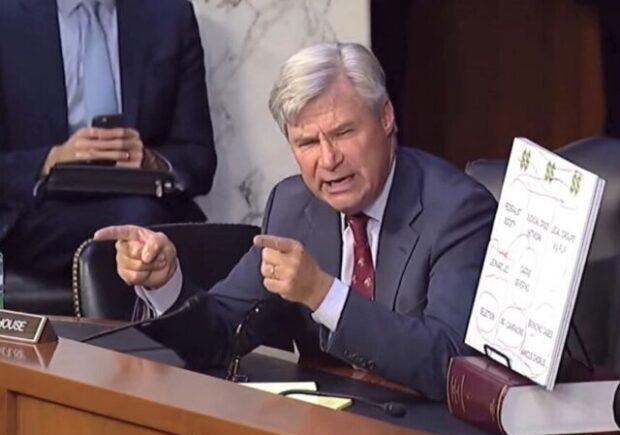 Obamacare, the most sweeping transformation to the nation’s healthcare system and economy in generations, is set to go before the Supreme Court one week after the November 3rd election. At stake is not just President Obama’s signature legislation, but as much as 18 percent of the country’s GDP—the future of which depends upon the makeup of the nation’s highest court.

That’s not lost on the professional Left and its legion of paid-for activists, who are desperately trying to halt Senate Republicans from confirming President Trump’s latest Supreme Court nominee, Judge Amy Coney Barrett, to fill the seat occupied by the late Justice Ginsburg.

Demand Justice – the same ideologues who led the Left’s hideous campaign to smear Justice Brett Kavanaugh as a gang-rapist during his Supreme Court confirmation in 2018 — is at the center of the disinformation machine aimed at stopping Barrett and packing the Supreme Court with far-left justices. In late September, the attack group announced a “seven-figure” ad buy to bludgeon Republican Senators into withholding a confirmation vote until after the presidential election.

Like Kavanaugh, Demand Justice has turned Barrett—widely considered a Constitutional originalist—into a dark apostle for racial discrimination, overturning Roe v. Wade, and abolishing Obamacare. “Barrett is a far-right, activist judge whose confirmation would threaten to upend the lives of millions of Americans,” the group shrieks in its anti-Barrett “fact-sheet.”

But you won’t find Demand Justice listed on the websites of the IRS or nonprofit monitors like ProPublica, because it isn’t a real organization—it’s a front for the leftist Sixteen Thirty Fund. Sixteen Thirty Fund is a top “dark money” spender that funnels millions of dollars to leftist groups like America Votes, American Bridge, and Color of Change, all of which bolster Democratic turnout in elections.

Sixteen Thirty Fund is a product of the professional Left, seeded with cash from the infamous ACORN, Sierra Club, and Americans United for Change (AUFC). AUFC was exposed by journalists in October 2016 for hiring agitators to start fights in Trump rallies, leading to the resignation of the prominent activists who organized the violence.

But the deception doesn’t end with the Sixteen Thirty Fund, which is just one group in a network of nonprofits run by the Washington, DC-based consultancy Arabella Advisors—a “dark money” network that poured out over $600 million in 2018 to aid Democrats and left-wing groups. That figure rises to an incredible $1.8 billion spent between 2013-18—with virtually no scrutiny by the mainstream media.

In the 2017-18 election cycle, Arabella’s nonprofit empire raised more than twice as much as the combined $501 million raised by Republican National Committee and Democratic National Committee—and it’s continuing to grow.

In our new report The Shadow Over America, Capital Research Center exposes the river of “dark money” flowing through Arabella’s nonprofits to groups bent on fundamentally transforming America.

Left unchecked, these groups can be effective. In the 2018 midterms, Arabella floated as many as 15 “pop-ups” that savaged Republicans on healthcare, an issue that many observers attribute to Democrats’ takeover of the House of Representatives that year.

Don’t be fooled by the myriad groups with fierce names and slick websites like Demand Justice. They represent Beltway Big Money, not America. If Senate Republicans confirm Barrett to the Supreme Court—as many expect they will—we’ll gladly chalk up another defeat for Arabella’s Astroturf activism.

This article first appeared in Legal Insurrection on October 14, 2020.