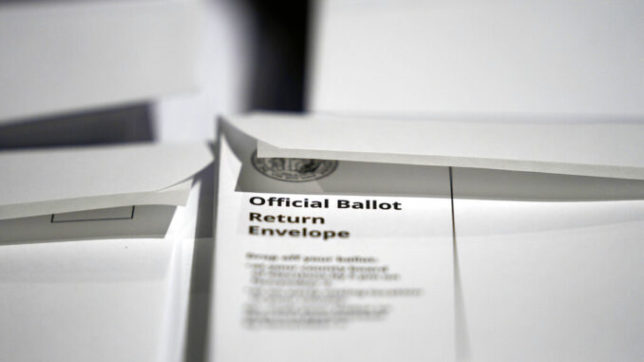 Stacks of ballot envelopes waiting to be mailed are seen at the Wake County Board of Elections in Raleigh. (AP Photo/Gerry Broome, File)
by Sarah Lee, Hayden Ludwig

If there’s something the left has plenty of, it’s cash. When you add that largesse to liberals’ newfound love of mail-in voting — something even Barack Obama frowned upon as recently as 2008 — you have a recipe for mischief that almost certainly tilted states to favor Democrats in the 2020 election. Georgia is a prime example, and it should come as no surprise the Biden Department of Justice has chosen to sue the state over its election-reform legislation.

That lawsuit will draw attention away from the story of what happened in Georgia in 2020, when left leaning “dark money” groups flooded the Peach State with outside money. The Washington, D.C.,-based Sixteen Thirty Fund — part of a $731 million nonprofit network run by the left-wing consultancy Arabella Advisors and the 10th-biggest spender in 2020 — funneled at least $23 million into PACs and super PACs created to support Democrats both in 2020 and in the January special election, which determined control of the U.S. Senate.

Together these groups — such as Future Forward, the League of Conservation Voters Victory Fund, Take Back 2020, and American Bridge 21st Century — helped Joe Biden, Raphael Warnock and Jon Ossoff turn Georgia blue for the first time in decades.

The Capital Research Center was the first to expose Arabella’s strategy. If there’s one thing that’s clear after studying this network for over two years, it’s this: When liberal donors come to Arabella, they’re expecting a political payoff. Little wonder this partisan empire has passed through billions of dollars to radical activists, funds which came from the likes of the Gates, Buffett and Ford Foundations.

How much more damage did Arabella cause in battleground states like North Carolina?

Georgia saw $28 million in CTCL’s “Zuck Bucks,” supposedly distributed on a nonpartisan basis. In reality, 96% of the funds went to just 12 vote-rich counties mostly surrounding Atlanta, all of which broke for Biden.

Whatever one believes about the integrity of mail-in ballots, McReynolds is hardly nonpartisan. She runs the National Vote at Home Coalition (NVHC), a group created by the U.S. Postal Service workers’ union to enact vote-by-mail, automatic voter registration, and anti-voter ID policies. NVHC is funded by eBay founder Pierre Omidyar and Stephen Silberstein, a liberal mega-donor who supports dismantling the Electoral College and is a member of the Democracy Alliance, a veritable Who’s Who of the Left.

Some of NVHC’s work can be seen in Green Bay, Wisconsin, which “went rogue” under the influence of an NVHC staffer who practically ran the city’s election as its “de facto elections administrator.” That staffer had access to Green Bay’s absentee ballots days before the election. Green Bay received $1.1 million from CTCL. See a pattern?

For her services, President Biden nominated McReynolds to the USPS governing board, touting her as an “independent,” not a Democrat. Why? By law the USPS governing board may have no more than five members from the same political party. Confirming her as an independent frees up Biden to appoint another Democrat and makes McReynolds the deciding vote on future mail-in voting and election integrity decisions.

And McReynolds is wasting no time. She’s already attacked Arizona’s ongoing 2020 election audit and called Republican “disinformation” the “biggest election security issue we face” while arguing that federalizing elections is the only way to stop it.

What this all boils down to is that vote-by-mail is the future of American elections if the professional left gets it way. Fortunately, in March Georgia lawmakers took steps to ensure the integrity of future elections by banning officials from accepting private funds. The left’s fury — and the Biden Justice Department’s lawsuit trying to stop them — proves the law is working. Elections must be transparent and above partisan influence.

This article originally appeared in The North State Journal on July 7, 2021.