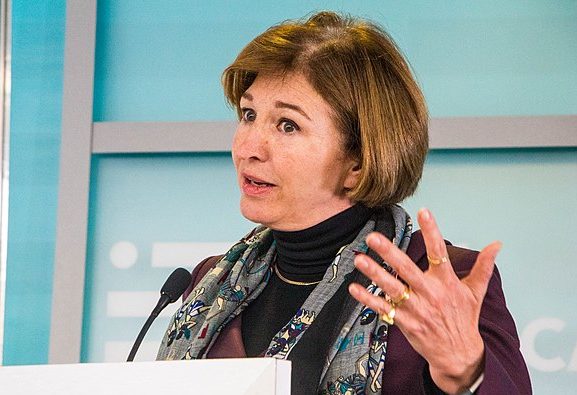 Hardened leftists disguised as evangelical Christians are trying to destroy the conservative movement from within by recasting environmentalism as a “conservative” issue. These aren’t grassroots Christian groups persuaded by arguments for global warming theory. Rather, they’re part of a decades-long effort by the environmental Left to infiltrate conservative evangelicalism by redefining “pro-life” to encompass the “gospel of climate change” and bloated government social policies—in fact, as anything but the protection of the unborn and the sanctity of life.

Their ultimate goal is to split conservative evangelicals from the Republican Party and pave the way for the Left’s radical global warming agenda.

One of the most important groups behind this strategy is New America (formerly the New America Foundation), a nominally moderate think tank populated by many veterans of the Obama administration and the professional Left. Anne-Marie Slaughter, the group’s CEO, was a policy director for Obama’s State Department under Secretary of State Hillary Clinton. In a 2018 interview with Politico, Slaughter accused Trump of “defiling and degrading” the presidency, adding:

I only hope that he provokes a counter-reaction so strong, at the polls and in our lives and hearts, that it provides the energy and vision for the scale of change we need to create the next America.

Between 1999 and 2018, New America received over $170 million in grants—many of them six- and seven-figure—from liberal behemoths such as George Soros’s Open Society Foundations, the Ford Foundation, and the Hewlett Foundation, one of the leading funders of fake conservative groups on the eco-Right. Soros alone donated roughly $7.7 million to New America during that period.

In 2015, New America released a report advising leftists on how to use climate change to form a “solid beachhead” within the evangelical movement to drive a wedge between them and the Republican Party, which relies on conservative evangelicals as a major constituency.

It’s an update to a strategy tried a decade ago by the Evangelical Environmental Network (EEN), a liberal group in conservative clothing that actively targeted historically conservative groups for infiltration, including Billy Graham’s magazine Christianity Today and the National Association of Evangelicals. EEN made inroads with what it called “creation care”—global warming and other issues rebranded as biblical—but failed to spread environmentalism among conservative evangelicals thanks in part to the Cornwall Alliance, which exposed EEN’s attempt to “green the churches.”

Little wonder, then, that EEN is funded by liberal stalwarts whose grants describe the group’s efforts to infiltrate conservative evangelicalism:

EEN’s agenda hasn’t changed, but its tactics have. Instead of shifting evangelicals’ views on environmentalism, the group wants to “green” their vocabulary in order to undermine the pro-life movement.

The term “pro-life” refers to an understanding that life begins at conception and consequently that abortion at any stage of development means killing a fetus. But “creation care” liberals at EEN are attempting to expand this definition to include support for expanded government social services and policies to address global warming and promote environmental “sustainability.”

The net result is a term which means so many things that it loses meaning altogether—after all, if the term refers to everything from abortion to recycling, there’s no value in identifying oneself as “pro-life.”

EEN may call itself pro-life, but its global warming lobbying campaign reveals an effort to rebrand the Left’s war on oil and natural gas a biblical imperative. The group pushes junk science that falsely labels carbon dioxide—a naturally occurring gas essential to life on Earth—as a pollutant. “Pollution harms the unborn, causing damage that lasts a lifetime,” EEN claims, adding that “pro-life Christians must lead the charge on clean energy.”

But there’s nothing conservative about a lukewarm version of the Left’s increasingly radical climate agenda. Carbon taxes may be less extreme than the Green New Deal, but that hardly makes them conservative—no more than EEN’s attempt to appeal to evangelicals makes its political agenda biblical. Christians should be wary.