Labor Watch April 2016: Unions Fear the Trump Threat: A billionaire businessman shows how working-class voters might be pulled away from the Left 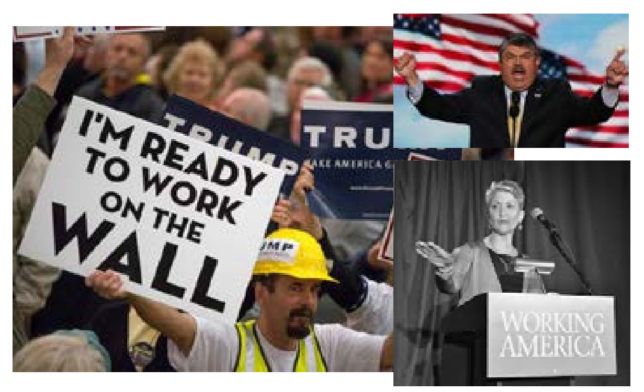 Unions Fear the Trump Threat
A billionaire businessman shows how working-class voters might be pulled away from the Left
by Steven J. Allen [PDF here]

Summary: Whether or not Donald Trump wins the Republican presidential nomination, the reaction to his candidacy among working-class Americans shows that voters in union households are no longer a “safe” constituency for Democrats. A Republican presidential nominee who makes a sincere, savvy appeal to workers—whether that nominee is Trump or someone else—may be able to create a profound shift in the American political landscape.

For decades, Republicans have failed to make significant cracks in the united Democratic front presented by the nation’s unions. At least 30 percent of union members usually vote for GOP candidates, and Mitt Romney in 2012 received 40 percent of the vote cast by union households, but the unions themselves—with their wealthy and otherwise political formidable machines—support Democrats almost exclusively.

If Donald Trump is the Republican nominee for president this year—or if the nominee is someone who, like Trump, is seen by many voters as a champion of the working class—there may be a major change in voting patterns of union members and their families. Could such a shift be so profound that it would threaten unions’ alliance with the Left? This is a prospect that puts fear into the hearts of union leaders who, since the 1990s, have moved their focus away from improving their members’ wages, benefits, and working conditions, in order to promote instead an agenda rooted in left-wing Political Correctness.

Republicans face danger mixed with political opportunity: the possibility that, even as blue-collar workers and “Trump Democrats” gravitate toward the GOP—perhaps putting states like Pennsylvania, Michigan, and Minnesota into play in the Electoral College—other voters will be repelled by Trump himself or by a Trump-type message.
Unions aren’t taking any chances. They’re already moving to counter the Trump threat.
Worry in San Diego
On the last weekend in February, union leaders gathered in San Diego to discuss a report analyzing the reasons that “white” members of the working class were turning to Trump. The report, Fighting Right-Wing Populism, was prepared by Working America, the AFL-CIO’s affiliate that reaches out to politically likeminded people who can’t or won’t join unions.

Founded in 2003, Working America is headed by Karen Nussbaum. According to the watchdog website Discover the Networks, Nussbaum in the late 1960s was a member of a support group for the violent, racist Black Panther Party. In 1970, she participated in a “Venceremos Brigade,” a group of young people who traveled to Cuba in support of the government of that country’s murderous dictator, Fidel Castro. She described [For the rest of the article, click HERE.]