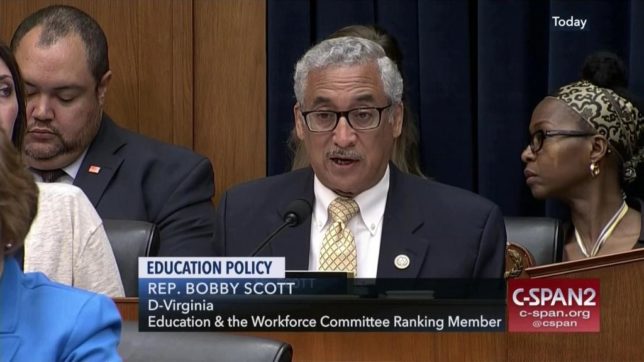 Enjoying their newly won majority in the House of Representatives, Democrats and their labor union allies wasted little time in pressing their advantage.

Last week, the House Education and Labor Committee hosted a hearing entitled, “Protecting Worker’s Rights to Organize: The Need for Labor Reform,” where the public was able to take a good look at the new majority’s labor-union-serving agenda.

In their opening statements, Democratic witnesses complained about the ongoing and consistent decline in union membership, the differences in employee benefits and compensation between union and non-union employees, and challenges associated with union organizing. Meanwhile, Taubman spoke of fighting compulsory union membership and advocating reforms to union law that would allow more choice for employees regarding their union membership.

The Representatives’ questions, however, showed the true purpose of the hearing: Unions—that spent heavily to support the Democrats on the committee—want a return on their investment, a return that looks like the Orwellian “Workplace Democracy Act” introduced by Wisconsin Representative Mark Pocan (D-WI) and Vermont Senator Bernie Sanders (D-VT) in the last Congress.

The three major changes that legislation would have enacted included ending secret ballot elections for union certification, establishing government-mediated “binding arbitration” to handle contract negotiations between employers and unions, and repealing the Taft-Hartley prohibition on secondary boycotts, a prohibition passed by the Taft-Hartley Act to ensure industrial peace. While Pocan-Sanders went nowhere before January 2019, Democrats now have control of the House and union supporters to patronize.

Republicans spent the hearing defending the part of the legislation that Democrats want to get rid of the most: secret ballot elections. During the hearing, Republicans emphasized the importance of secret ballot elections that the Pocan-Sanders legislation would eliminate, while Democrats praised so-called card checks: public union card-signature drives that unions prefer to private voting.

To get an idea of the difference between a secret-ballot vote and a card check, consider a hypothetical. Imagine that you are a disgruntled worker frustrated with your treatment at work. You and your fellow employees talk of organizing a union as a possible mechanism to bring fair treatment. Someone reaches out to the union. Soon, one of your fellow workers begins passing out cards with complicated language, asking for your signature. Whether you know it or not, if you sign you may have joined the union.

Once 30 percent of the workforce sign the cards, the union can petition the employer for certification of the union, which means monopoly bargaining and (in 23 states and D.C.) forced dues. (The union probably won’t petition until it has secured signatures from a comfortable majority.) Your employer has two options: voluntarily recognize the union without any contest or call for a secret ballot election of everyone who will be potentially represented by the union.

Under the Pocan-Sanders legislation, that secret-ballot option would go away. Instead, only the public signature cards would count, and a majority would mean the union wins immediately. There would be no opportunity to cast a private ballot after weighing the pros and cons of a union or non-union workplace.

Proponents of the Pocan-Sanders legislation argue that ending the secret ballot elections eliminates an unfair advantage that employers have in these elections since they can call mandatory meetings to campaign against unions and prevent organizers from stepping on company property. At the hearing, Rep. Andy Levin (D-MI) claimed that he “would have been arrested” if he ever went on company grounds during his time as a union organizer prior to being a member of Congress.

But those who make this argument ignore a competitive advantage that unions have in these elections: home visits. During the certification process, unions are provided contact information (phone number, email address, and home address) and frequently make home visits to campaign for unionization efforts making the advantage of mandatory meetings seem minuscule.

Democratic witnesses also railed against the National Labor Relations Board (NLRB) for their role in labor disputes, arguing that the board has taken a more anti-union stance during the Trump administration. It has—because under the Obama administration, it was a handmaid of the unions, overturning decades of cumulative precedents to make up for the Obama administration’s inability to pass legislation like Pocan-Sanders. Becoming “more anti-union” means in practice following longstanding procedure and practice as a neutral arbiter.

Labor unions are more than aware that legislation like the Pocan-Sanders bill won’t make it to a Rose Garden signing ceremony with President Donald Trump. Rather, the unions are shifting the debate so that next time Democrats have full control of the elected arms of government, the unions are ready to pounce with an aggressive agenda.

Prominent labor organizer Saul Alinsky, once said, “Power goes to two poles—to those who’ve got money and those who’ve got the people.” Labor unions are working around the clock to keep and gain both.