Is Pastors for Texas Children a Front for Texas Teachers Unions?

Pastors for Texas Children, a left-of-center advocacy group in Texas, claims to be a charitable organization that is “not beholden to any special interest group.” If its activities over the weekend are any indication, its charitable status should be challenged. And if its funding and self-reported “sponsors” are any indication, claiming to be independent of special interests is false witness.

The IRS regulations are clear:

Under the Internal Revenue Code, all section 501(c)(3) organizations are absolutely prohibited from directly or indirectly participating in, or intervening in, any political campaign on behalf of (or in opposition to) any candidate for elective public office.

That makes this statement by Pastors for Texas Children problematic: 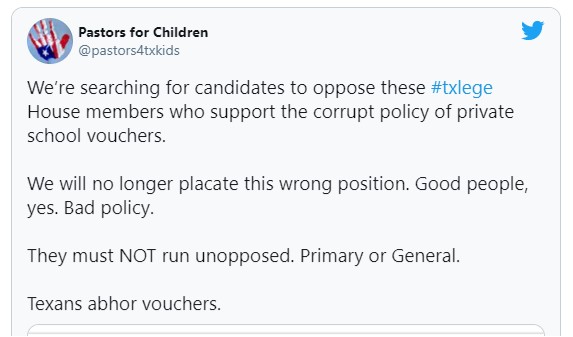 “Searching for candidates to oppose these House members” is pretty much the textbook definition of “directly or indirectly participating in, or intervening in, any political campaign.” That particular comment was not isolated, either. Pastors for Texas Children has made a number of comments with electioneering implications.

But I have a greater concern for these pastors: Their organization appears to violate the spirit of the commandment not to “bear false witness.” On its donation page, Pastors for Texas Children states, “Pastors for Texas Children is an independent organization, not beholden to any special interest group.” This statement (if I may quote Yes, Prime Minister) causes “epistemological problems of sufficient magnitude as to lay upon the logical and semantic resources of the English language a heavier burden than they can reasonably be expected to bear.” The donation page also confirms the group is a 501(c)(3) nonprofit organization subject to the IRS prohibition on campaign intervention.

The evidence suggests that Pastors for Texas Children is beholden to special interests and would better be called “Pastors for Texas Teachers Unions.” The organization has taken at least $25,000 in funding from the American Federation of Teachers, but that may not be all. The group put on a “virtual fundraiser” in October 2020 headlined by Diane Ravitch, a onetime school reformer who now toes the teachers union line. Unsurprisingly, among the organization’s sponsors are the national AFT, the Texas state affiliate of the AFT, and the Texas state affiliate of the National Education Association (NEA), the other national teachers union. Most of the other sponsors are professional and lobbying organizations for government schools in the state and the pro-abortion advocacy group Texas Freedom Network, which probably qualify as “special interest groups.”

Look Beyond the Label

Pastors for Texas Children is more than its name suggests and is closely aligned with a particular set of political actors. This is yet another warning to the public to look beyond poll-tested names of advocacy groups and look deeper for the union label. It will help identify those activists who are, in fact, beholden to special interests.