Soros cash in Ireland’s campaign for “abortion on request” 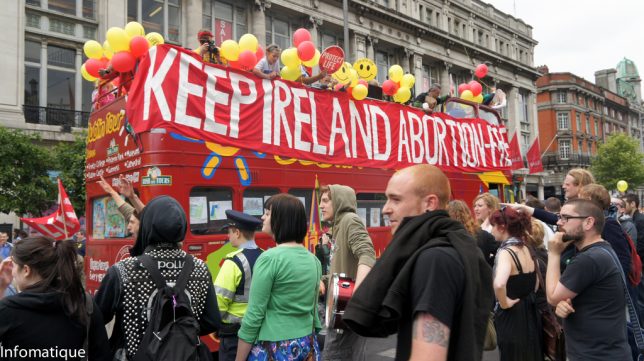 If you haven’t heard, the Irish Republic is locked in a struggle to the death ahead of a May, 25, referendum vote on its pro-life 8th Amendment, which effectively bans abortion (except in cases where a pregnancy threatens the mother’s life). The 1983 constitutional amendment recognizes the right to life of the unborn—almost unprecedented in the modern world—and was passed by nearly 67-33 percent of voters under a center-right-labor coalition in the Taoiseach, or parliament.

Now “the 8th” is under withering fire by pro-abortion activists, who have successfully lobbied the country to hold next month’s national referendum. Leading the charge is Amnesty International Ireland, which argues on its website (among other things) that “[a]bortion ‘on request’ should be available without limits for adolescent girls.” And aiding their efforts is a steady stream of funding from a powerful left-wing ally in the United States— liberal billionaire George Soros.

In late 2017, the Standards in Public Office Commission (SIPO), an independent government watchdog, reported that a leaked document from Soros’s Open Society Foundations (OSF) revealed the foundation’s plans to fund three Irish groups “work[ing] collectively on a campaign to repeal Ireland’s constitutional amendment granting equal rights to an implanted embryo as the pregnant woman.” OSF gave some $160,000 to the Irish Family Planning Association, $25,000 to the Abortion Rights Campaign, and $150,000 over two years to Amnesty International Ireland. (OSF is also a major funder of abortion rights groups in the U.S., and has given at least $23 million to Planned Parenthood since 1999, according to the website Foundation Search.)

Under a 1997 Irish law, accepting foreign money over €100 for “political purposes” is a crime for nonpolitical organizations, and SIPO has ordered the groups to return the donations, warning that they may face criminal charges if they do not comply. Two of them—the Irish Family Planning Association and the Abortion Rights Campaign—have complied.

Amnesty International Ireland, however, has defied the order and kept the money. While the group maintains that the donation was not for political purposes, OSF has quietly distanced itself from the scandal, saying that Amnesty first approached OSF for the money, not the other way around. OSF even blamed the Russians for the whole debacle, alleging that the leaked documents were:

stolen from our servers and illegally published on the DC Leaks website in 2016, reportedly by hackers working for the Russian government seeking to publicly discredit our human rights work around the world [emphasis added].

OSF’s excuse apparently amounts to 1) Amnesty came to us first!; and failing that, 2) It’s Russia’s fault.

It may be a paltry defense; but to be fair, pro-life groups in the U.S. and U.K. have reportedly raised “hundreds of thousands of dollars to support Irish anti-abortion groups like Youth Defence,” according to the New York Times. None have received similar warnings from SIPO—opening the door to charges of hypocrisy by pro-choice campaigners. But the Times also reports that foreign influence on the anti-abortion side has apparently been limited to hiring consulting firms like the London-based uCampaign (which developed apps for American conservative groups), buying pro-8th Facebook advertisements, and funding educational organizations like the Irish Center for Bio-Ethical Reform.

And while some pro-abortion activists have criticized the Roman Catholic Church’s religious influence in both the 1983 and 2018 campaigns to create and preserve the 8th, respectively, the pro-abortion activists have their own religious allies. Dr. Umar al-Qadri, one of Ireland’s top imams and chair of the Irish Muslim Peace & Integration Council (IMPIC), announced in February that “I am in favour of ‘Repeal the Eighth’ and IMPIC will release soon a guideline for Muslims in Ireland who may be unsure how they should vote.”

While no (democratic) country can succeed in entirely insulating its referenda from outside influence, voters in sovereign nations ought to be free to make up their own minds at the polls—particularly where issues of life and death are concerned. John McGuirk, a spokesman for the pro-life group Save the 8th, made it clear that, while “overseas funding and overseas influence [is] very hard to stop,” the group wouldn’t accept foreign funding for its own Facebook advertisements. “We’re going to be upfront and honest about everything,” he said.

Activists on both sides of the Atlantic ought to respect Irish campaign finance law as well. Too many on the pro-abortion side don’t. Contrast McGuirk’s statement with that of Amnesty International Ireland executive director Colm O’Gorman, who griped that “anti-choice campaigns weaponised a deeply flawed law,” and refuses to return the illegal donation on the grounds that the funding prohibition is “unfair.”

O’Gorman’s complaints are telling. In other words, the pro-abortion group intends to use Soros’s money to repeal Ireland’s 8th constitutional amendment—even if it has to break the law to do so.