Is Antifa Changing Its Strategy? 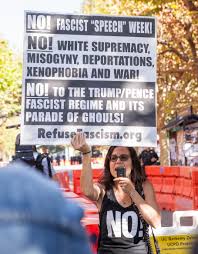 Although the radical Antifa movement isn’t best known for activism related to the abortion issue, its activists in California recently protested a campus speech by Kristan Hawkins, president of Students for Life of America (SFLA).

Antifa is not a single organization: it is a movement or coalition of leftist groups, each of which claims to combat “fascism,” a political ideology whose definition academics have been arguing about for decades. The word Antifa itself is a truncation of anti-fascist. Despite the name, the movement throws the word fascist around promiscuously, applying it strategically to conservatives, Republicans, libertarians, and even some liberals. Antifa groups embrace violent tactics and revel in shutting down events conducted by those they label as fascist.

This is what makes the April 11 protests of Kristan Hawkins so interesting. The Orange County branch of the Antifa group, Refuse Fascism, used Facebook to urge supporters to protest the Ms. Hawkins’ planned appearance at California State University at Fullerton. Surprisingly, no arrests were reported and the events were allowed to proceed without disruption.

On a Facebook event page, Refuse Fascism described Hawkins as a “fanatical anti-feminist Christian-fascist,” and accused her of spewing “misogynistic, anti-women poison,” the Christian Post reported.

“The anti-choice agenda being pushed by Trump/Pence and their fascist movement is nothing less than preparing for the ground for a real-life Handmaid’s Tale, with women completely enslaved and subordinated to a patriarchal order,” the event description read, making reference to the dystopian book by Margaret Atwood that is now a hit drama series on Hulu.

Connor Atwood (no relation to the novelist), a student organizer for Refuse Fascism in Orange County, explained to the Orange County Register why his group demonstrated against Hawkins.

He linked her group to the “Trump/Pence regime” which he claims is seeking “to impose on the people of the world … an American fascism steeped in white supremacy, misogyny and xenophobic nationalism” and that threatens to potentially “annihilat[e] civilization.”

Because Hawkins’ group would outlaw abortion, its members are equivalent to “Hitler-youth” who want to treat women as “mere breeders or incubators, subordinate and shackled to a patriarchal order that sees them merely as objects.” Pro-lifers are about “control over women, not saving lives (as evidenced by their bombings of clinics and outright murder of heroic doctors who provide abortions).”

Hawkins “and the whole fascist program against women and their rights” need to be opposed and the “entire culture on campuses needs to be shaken up” so students take on “the grave threat being posed by the Trump/Pence fascist regime.”

Then Atwood played the “intersectionality” card, claiming “it is crucial to link the women’s movement with the movements to defend immigrants, LGBT people and the people of the global south from wars of empire,” in order to overcome “the beasts that inhabit the halls of power now.”

Atwood’s stilted rhetoric isn’t new. Hawkins isn’t actually a fascist or a radical and Students for Life of America appears to be a mainstream religiously conservative, pro-life group.

As the Orange County Register reported:

The speech was part of Hawkins’ “Lies Feminists Tell” tour, in which she argued “how Planned Parenthood betrays women and how modern feminism deceives women into aborting their unborn children,” according to Students for Life. Protests were also announced for Hawkins’ appearances at Cal State Los Angeles the day before the CSUF event and at UCLA the following day.

Whether this protest by Refuse Fascism against pro-life activism reflects a wider shift within the Antifa movement is unclear. But what’s most interesting is the conspicuous absence of violence associated with this demonstration. It’s decidedly tame. Does this suggest that the radical leftists are heeding the advice of some mainstream commentators?

No less a figure than Noam Chomsky has criticized Antifa, calling it a “gift to the right” for letting its violent tactics overwhelm their supposedly anti-bigotry message. “What they do is often wrong in principle—like blocking talks—and [the movement] is generally self-destructive … That’s quite apart from the opportunity costs—the loss of the opportunity for education, organizing, and serious and constructive activism.”

Of all online outlets, even Vox (which we know is not above slandering conservative pundits) questioned Antifa’s tactics after a peaceful protest turned violent in California.

So is Refuse Fascism a particularly milquetoast faction of the Antifa movement, or does this represent a sea change in the anti-fascists’ overall strategy?