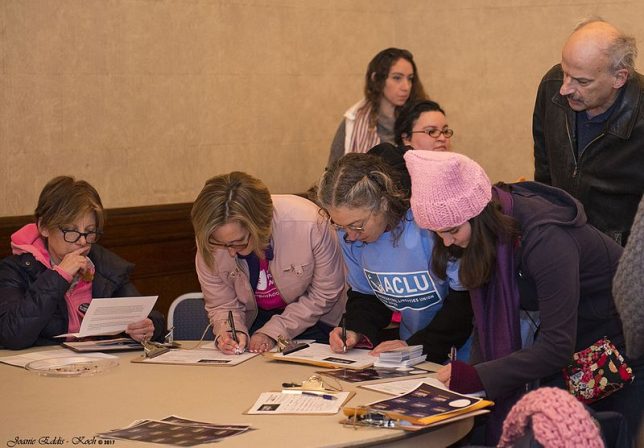 The American Civil Liberties Union (ACLU) may be a left-leaning organization, but historically it has earned grudging respect by some on the right for an apparent internal commitment to an expansive view of free speech rights and rights for accused suspects. However, that commitment has been strained by the ACLU’s desire to fit in with the liberal broad front (and its highly lucrative revenue stream): In recent years the group has reversed its support for the Religious Freedom Restoration Act and expressed doubts about its longstanding position that even avowed racists  have free speech rights worth protecting.

To this list of positions the ACLU has sacrificed at the altar of the left-wing intersectional consensus, one must now add the rights of the accused—at least in college-campus disciplinary proceedings. Last week, the Department of Education released new guidelines for sexual assault hearings, partially reversing the damage created by the Obama administration’s “Dear Colleague Letter.” This guidance directed publicly funded universities to lower the burden of proof needed to discipline a student for committing sexual assault. The ACLU, which has broadly defended due process rights in the past, had this to say:

We advocate for fair school disciplinary processes that uphold the rights of both parties in campus sexual assault and harassment cases.

Today Secretary DeVos proposed a rule that would tip the scales against those who raise their voices.

We strongly oppose it.

To make that explicit, the American Civil Liberties Union is concerned that allowing representatives of accused students to cross-examine their accusers and granting the accused access to all evidence in the case is “inappropriately favoring the accused.” In short, the ACLU cast aside the civil liberties of accused students so as not to cross the ACLU’s intersectional feminist allies.

And in casting off the organization’s ostensible single purpose or single issue to more closely align with the broader political movement in which it finds itself, the ACLU is not alone. Jewish conservatives have complained that under its new president, ex-Obama administration official Jonathan Greenblatt, the Anti-Defamation League, a major Jewish civil rights organization, has failed to confront left-wing anti-Semitism. On the right, a number of gun owners expressed dismay when the National Rifle Association did not vigorously defend the rights of Philando Castile, a concealed-carry permit holder shot to death by a Minnesota police officer without overt provocation in what commentators called a “miscarriage of justice.”

In these cases, both the ADL and NRA found themselves cross-wise with members of their broader political tribe—the left-leaning ADL would have to condemn the Women’s March for its anti-Israel sentiments, while the right-leaning NRA would have had to criticize law enforcement. Both organizations stuck with their tribes. Alongside the ACLU’s “inappropriately favoring the accused,” all are waypoints on the path of further, more extreme polarization, which undermines these organizations’ founding principles.