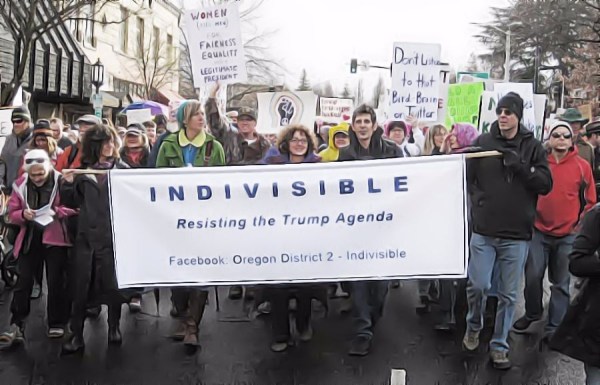 From town hall protests to anti-Trump marches and congressional office sit-ins, it would be a mistake to undervalue Indivisible’s presence in 2017 politics. The far-left organization’s leadership and activism is felt nationwide, and was on full display as they mobilized followers to push against Congress’ first attempt to repeal Obamacare last March. This year, Indivisible is gearing up again for their most important fight yet, the 2018 midterm elections – but it’s now an official 501(c)(4) nonprofit.

Established by left-wing activists Ezra Levin and Leah Greenberg in December 2016, Indivisible was originally organized as a grassroots movement along the lines of the conservative Tea Party. To that end, their first project was a 26-page political organizing manual entitled A Practical Guide for Resisting the Trump Agenda, which highlighted the best methods to “beat back” President Trump and rebel against the new conservative majority in Congress. Since that original document (and over 2 million downloads later) was distributed, the movement has evolved into an effort to disrupt civil discourse and create an “America that is more like a social democracy.”

Although Indivisible is pitched as an insurgent grassroots movement divorced from wealthy donors, special interests, and elected officials, new connections show that Indivisible is in reality just another story of an AstroTurf network funded by the professional Left to be a new front for their radical agenda.

Key to Levin and Greenberg’s political strategy as outlined in their manual is popular “resistance” to Congress and the Trump administration. Yet their supposedly grassroots organization has closer links to left-wing billionaire George Soros than they might like to admit.

Andrew Padilla, Indivisible Project’s policy director, previously worked as an analyst with the National Immigration Law Center (an organization funded by grants from Soros’ Open Society Foundations) and as an immigration policy consultant at the Soros-funded UnidosUS (formerly the National Council of La Raza). These ties have led to stronger partnerships with the radical groups MoveOn.org and the Working Families Party, which worked with Indivisible to run a nationwide teleconference with over 60,000 listeners on January 22, 2017.

Ties to the Establishment Left

Indivisible’s most prominent allies are a veritable who’s who of the professional Left: the Democratic Socialists of America, American Civil Liberties Union (ACLU), MoveOn.org, Planned Parenthood, the Working Families Party, Tides Foundation, and the Urban Justice Center, to name a few.

Nevertheless, Indivisible claims to be aloof from the “establishment” Left. Last year the group even went so far as to publicly distance themselves from contributions made from groups that supported Hillary Clinton’s failed 2016 presidential bid. Padilla may claim that they “wanted to make sure to everyone that we are maintaining our independence,” but from its list of donors it’s clear that Indivisible is just the latest project by America’s professional Left.

Kenneth Vogel, a reporter at the New York Times, discovered in October that Indivisible’s recent growth could be attributed to funding from members of the left-wing elite like

In the past few years these donors have gained notoriety for actions like boycotting establishment groups, staging protests to support liberal platforms and ultimately for getting barred from the Democratic National Committee headquarters.

New links to the Democracy Alliance (DA), a shadowy network of high-profile, wealthy donors on the Left, are not all that surprising. (Democracy Alliance is a collective of left-of-center donors that actively fund projects and organizations on the Left.) In March of 2017 Politico reported on an NTK Network video released from a Democracy Alliance donor summit that reportedly shows Ezra Levin and Leah Greenberg networking with DA members. The Democracy Alliance donor summit is an exclusive event that is reserved for the inner circle of Left groups that represent the future of their movement. For Indivisible, this new source of income has propelled the movement further than they ever could and paved the way for more of its disruptive signature activities.

Indivisible may be best known for their effort to support the Women’s March last February, but for Indivisible groups much of their pride comes from organizing gatherings like ResistFest in Santa Cruz, “Cardboard Congressmen” town halls in Republican-controlled districts, and local “Resist Trump Tuesday” meetings.

These weekly meetings involve Indivisible chapters gathering together in state capitals to lobby representatives on both sides of the aisle to fight against the President’s policies and promote the platforms of the Left. Sarah Dohl, Indivisible’s chief communications officer, said that, “It’s not a secret that we would like to move the Democratic Party further to the left.”

“The Party,” she added, “will only get to where it needs to go if it has groups like ours pushing them to do the right thing.”

Andrew Padilla argues that retaking the House and Senate is the only way to preserve liberal policies, and that using the grassroot tactics outlined in their online guide will make that happen. Andrew Padilla outlined the organizations path forward in 2018,

Thanks to the incredible work of Indivisibles across the country, in 2018, we are a force to be reckoned with. And, as the new year starts, we must use that power, that strength to push Democrats to fight for a bold, progressive future and hold Republicans accountable for the betrayal of their constituents on votes to repeal healthcare and pass tax cuts for billionaires.

In 2018, we’ll replace the elected officials who don’t represent us with diverse, progressive, local leaders. And if we put in the work (beginning right now!), our movement will be the catalyst for the big blue wave we all hope to see on election night in just over 300 days.

Since the beginning of 2017, Indivisible claims that they have registered 5,800 groups with the movement and that their website has been viewed over 18 million times. In December 2017, Matthew Knott, a reporter at the Sydney Morning Herald, found that “the movement now has a headquarters in Washington, D.C. and 40 staff, paid for by the $6 million it has raised.”

Make no mistake: armed with its (c)(4) status (which means it can devote just under half of its program expenditures on political activity, Indivisible will make its presence felt during the 2018 election cycle.