In a stunning confession, Politico admits: We hate Ben Carson, so we just make stuff up about him [OK, they didn’t actually admit it]

Today, the top candidates for the Republican presidential nomination include Dr. Ben Carson, Senators Marco Rubio and Ted Cruz, and Carly Fiorina, the first woman to head one of the country’s top 50 businesses.

To Progressives, that lineup is a real problem. The Progressive movement grounds much of its appeal in identity (i.e., racist/sexist) politics and in the myth that its adversaries – conservatives, Republicans, non-leftist religious people, members of the Tea Party movement, et al. – are the ones who are racist and sexist. Yet a look at the GOP lineup strongly indicates otherwise. In the words of Chico Marx: Who you gonna believe, me or your own eyes?

Progressives are attempting to solve the Carson/Rubio/Cruz/Fiorina problem by declaring that those candidates aren’t really African-American, Latino, or female. The Republicans are imposters, you see, or, at least, fakes, dirty rotten lyin’ liars.

This week, they’re focused on Dr. Carson, who in recent polls has been in first or second place for the nomination. CNN staffers looked into some of the stories in his autobiography, such as his tale about almost stabbing a friend, and were unable to verify the stories—or, at least, the CNN people claimed that they looked in the stories and were unable to verify them. Even if the CNN people are telling the truth (and there is no reason to believe them), their lack of results does not prove, or even indicate, that Carson is lying.

Think of the stories your best friend has told you about his or her childhood. Could you prove all of those stories happened? Would you assume that any story lacking definitive proof was a lie?

It turns out, by the way, that Carson’s mother, Sonya, verified the stabbing story in a 1997 interview in Parade magazine (http://www.washingtontimes.com/news/2015/nov/9/ben-carsons-mother-verified-stabbing-story-in-1997/ ):

A young actor [in a movie about Carson] recreated the moment when, at 14, Ben Carson pulled a knife on a classmate and tried to stab him in the abdomen. Only the boy’s metal belt buckle kept Ben from cutting him–and going to prison instead of to Yale. “Oh, that really happened,” Sonya told me. “I sat him down and told him that you don’t accomplish much by being a bully. You accomplish more with kindness than you ever do by being harsh.”

Yet the CNN story, and a similar hit-piece in the Wall Street Journal, suggested, without evidence, that Carson makes stuff up. [For those who came in late: The Wall Street Journal’s editorial page is mostly conservative, with occasional interventionist/RINO tendencies; the Journal’s reporting staff is as kooky/ignorant/leftwing as other papers’.]

The main attack on Dr. Carson was related to a passage in his 1990 autobiography, in which Carson recounted a story from 21 years earlier:

At the end of my twelfth grade I marched at the head of the Memorial Day parade. I felt so proud, my chest bursting with ribbons and braids of every kind. To make it more wonderful, we had important visitors that day. Two soldiers who had won the Congressional Medal of Honor in Viet Nam were present. More exciting to me, General William Westmoreland (very prominent in the Viet Nam war) attended with an impressive entourage. Afterward, Sgt. Hunt introduced me to General Westmoreland, and I had dinner with him and the Congressional Medal winners. Later I was offered a full scholarship to West Point. I didn’t refuse the scholarship outright, but I let them know that a military career wasn’t where I saw myself going.

The Detroit News reported on an apparent discrepancy (http://www.detroitnews.com/story/news/politics/2015/11/06/carsons-westmoreland-story-match-records/75328960/ ):

Westmoreland’s Memorial Day schedule on May 30, 1969, indicates he was in Washington. The schedule says Westmoreland had a morning meeting with national security adviser Henry Kissinger, laid a wreath at an 11 a.m. memorial service in Arlington National Cemetery and had a 5 p.m. “boat ride on the Potomac.”

The Detroit News on Friday reviewed Westmoreland’s schedule for the dates in question among his official papers housed at the U.S. Army Heritage and Education Center in Carlisle, Pa.

The Army records and Detroit News archival records show Westmoreland was in Detroit on Feb. 18, 1969, for a dinner honoring a Vietnam War veteran. The banquet was for Congressional Medal of Honor winner Dwight Johnson, a Detroit African-American who risked his life “beyond the call of duty,” according to a website about black participation in the Vietnam War.

…so, most likely, Carson misremembered a February dinner, 21 years earlier, as occurring in May. He may have conflated two events, the Memorial Day parade and the dinner honoring Dwight Johnson. As this is written, that is the only part of Carson’s story about the scholarship offer that has come under attack.

Most of the folks in the news media aren’t serious people.

Thus, we get this, from Politico:

Except that, the real world, West Point does give out scholarships. In fact, it gives a scholarship to each and every one of its students.

…as seen in this ad, which appeared in the September 1992 issue of Black Enterprise magazine: 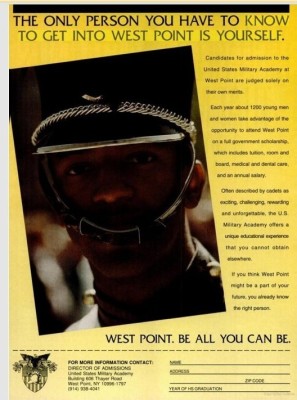 “Each year about 1200 young men and women take advantage of the opportunity to attend West Point on a full government scholarship,” according to the ad placed by the U.S. Military Academy at West Point.

As the leading ROTC student in Detroit, an African-American from a background of poverty, at a time when the Army was highly interested in recruiting qualified African-Americans, it is undoubtedly true that Carson could have had an appointment to West Point if he had sought one.

Perhaps Dr. Carson made up the story about meeting Westmoreland and going to dinner and. The problem for the media is that, as of this writing, there is no reason to think that he did.

Some “news” stories suggested that he had claimed he applied for West Point, but, as far as I can tell, Carson has always said that his only college application was to Yale. 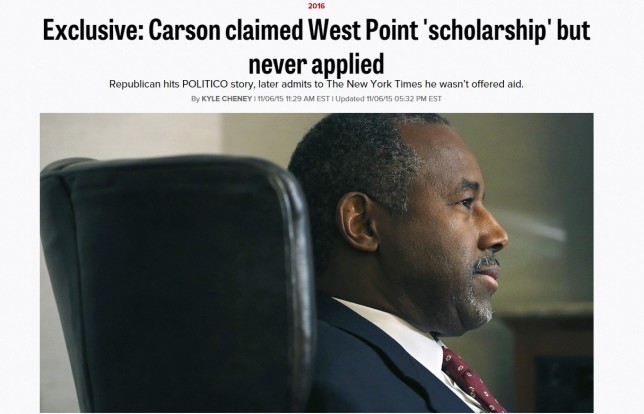 Of course, that headline, too, is false. He never “claimed West Point ‘scholarship’ but never applied.” (Note the sarcastic quotes around “scholarship.”) He said, plausibly, that he was offered a scholarship to West Point—that is, a nomination to West Point—but that he didn’t apply.

The excuse that we hear from the news media for their so-far-fraudulent attacks on Ben Carson is that they’re just vetting him the way they did Barack Obama. Republicans are just a bunch of whiners, they say, for complaining about getting the same level of scrutiny that Barack Obama did.

Hah! In a future column, I’ll take a look at how the news media failed to expose, or simply ignored, the falsehoods in Barack Obama’s life story. (I’ll bet you didn’t know that his iconic autobiography, the one that made him famous, was an autobiographical novel, never meant to be taken literally. Yep.)

The greatest lie in American history is the myth of the self-made person. Nobody makes themselves. We’re all shaped by communities, by people who struggled and sacrificed for us, by governments that offer safety nets. And what Ben Carson is able to do essentially is reject all that stuff and say that I was saved.

[Radio host ben Ferguson to Hill: “The government didn’t make me, though, Marc.”]