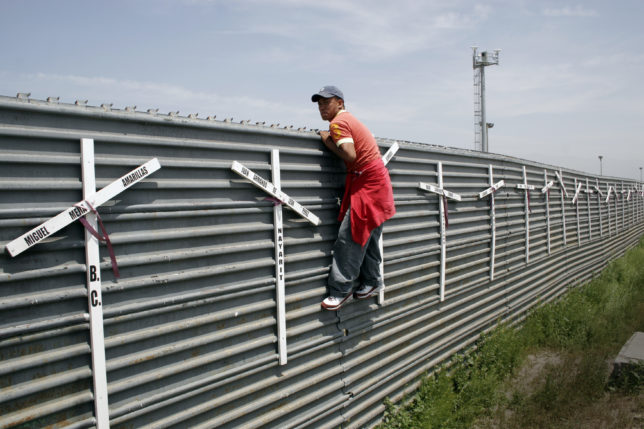 Critics of sound immigration policy often rely on a single rhetorical trope to resist the Trump Administration’s efforts to secure the U.S. border with Mexico: America doesn’t need a border wall because the only crisis on our southern border is a humanitarian one.

The New York Times, for instance, wrote in January that “the price of Trump’s migrant deterrence strategy [is] new chaos on the border.” A representative from the center-left American Immigration Lawyers Association even blamed the President for causing “a crisis at the border” in the Washington Post.

But whatever you think of Trump’s border wall, the President isn’t to blame for encouraging waves of Central Americans to risk life and limb to enter the United States illegally—the Left is.

In Washington, D.C., a handful of influential advocacy groups led by wealthy lawyers advance an agenda with millions of dollars and strategic litigation aimed at increasing immigration to the U.S. and providing citizenship for illegal aliens. These groups—the American Immigration Lawyers Association (AILA) and its lobbying arm, the American Immigration Council (AIC)—form the backbone of the legal Left’s attack on American sovereignty and the rule of law.

AIC frequently cites the far-left Southern Poverty Law Center (SPLC) in its legal work, filing motions against the U.S. government alongside the discredited organization. Both AILA and AIC are funded by left-wing heavyweights, including George Soros’s Foundation to Promote Open Society, the Ford Foundation, Unbound Philanthropy, and the Tides Foundation. According to its most recent filings, in 2016 AILA reported nearly $14 million in revenues.

AILA provides pro bono legal aid to non-citizens seeking asylum at the U.S. border. It forms two of the four members of the CARA Family Detention Project, a coalition created in 2014 to represent individuals that enter the U.S. illegally and are detained by American immigration authorities.

As noble as this cause may sound, though, it arguably encourages people to make the dangerous journey from Central America to the U.S. border in the belief that they will obtain refugee status in America. But “refugee” is a carefully defined legal term. According to U.S. Citizenship and Immigration Services, “asylum may be granted to people who have been persecuted or fear they will be persecuted on account of race, religion, nationality, and/or membership in a particular social group or political opinion.”

In other words, the United States has the sovereign right to determine who can enter its borders, and individuals who don’t meet those requirements aren’t eligible for asylum in this country. And most do not; while there’s no doubt that countries like Honduras and El Salvador are hotbeds for gang activity and murder, violence does not equate “persecution” under U.S. law. (In contrast, survivors of ethnic cleansing in the 1990s in Bosnia and Rwanda had a strong case that they are refugees from persecution, not just violence.)

While it isn’t clear how many—if any—of the Central Americans in the October 2018 caravan are lawfully eligible for asylum in the U.S., it is clear that the efforts of American activist groups have encouraged others to make a break for the border in the hopes that they will be accepted as refugees.

One such group is Al Otro Lado (Spanish for “To the Other Side”), a Los Angeles-based advocacy group. The group is small—reporting revenues of just under $62,000 in 2017—but it’s played an outsized role in pressuring the federal government to grant asylum hearings to members of the October caravan. Al Otro Lado primarily provides healthcare services along the border as well as pro bono legal services to recent immigrants, illegal immigrants, and asylum-seekers, but it also mobilized legal support for the caravan alongside the radical National Lawyers Guild (NLG).

NLG has a history of choosing far-left allies. The group was founded in 1937 in alignment with the Communist Party USA; today, former NLG President Michelle Alexander—a member of the NLG’s Palestine Subcommittee and columnist for the New York Times—describes herself as “sharply critical of Israel” and supportive of the extremist Boycott, Divestment, and Sanctions (BDS) Movement. In 2001, the NLG released a report criticizing America’s supposed “military and economic role in the violation of Palestinian human rights” and calling on the U.S. Congress “to pass legislation suspending all current foreign assistance to Israel.”

Al Otro Lado has been described as a “mediator between Pueblo Sin Fronteras and the [caravan] migrants,” referring to a group CRC identified in October as partially responsible for organizing the Central American caravan that month.

In November 2017, Al Otro Lado filed a class-action lawsuit against then-Department of Homeland Security Secretary John F. Kelly (since extended to Kirstjen Nielsen) and U.S. Customs and Border Protection (CBP) alleging “abusive immigration practices,” “LGBTQI persecution,” and “sexual and gender-based violence” against asylum-seekers from Mexico and Central America. Representing the group were attorneys from leftist standbys—the AIC, SPLC, and Center for Constitutional Rights—known for providing legal assistance to detainees in the Guantanamo Bay detention camp and previous lawsuits against CBP. (CBP maintains that the asylum-seekers represented in the class-action lawsuit are not eligible for asylum under United States law.)

Nora Phillips is Al Otro Lado’s co-founder, CEO, and legal director. Phillips previously worked as a staff attorney for the Central American Resource Center (CARECEN), an obscure litigation nonprofit that has lobbied for left-wing comprehensive immigration reform to expand the DREAM Act and create a path to citizenship for illegal aliens in the U.S. CARECEN has received funding from Soros’s Open Society Foundations, the California Endowment, and UnidosUS (previously the National Council of La Raza, or “the race”).

. . . You don’t qualify for asylum if you are leaving your country because you’re not able to feed your family. That is not a category by which you will receive an asylum. And that’s unfortunate, but that is the law.

While it wouldn’t be fair to accuse these groups of supporting something so extreme as an open-borders immigration policy, many liberals and conservatives are concerned about the humanitarian effects of their legal aid to migrants.

For one thing, the trek from Central America to the United States border is almost unthinkably dangerous. According to the center-left group Amnesty International, “80 percent of women experience rape and sexual assault during the migration process.” Heather Higgins, CEO of the right-leaning group Independent Women’s Voice, has warned that “many migrants wind up paying coyotes [a nickname for smugglers] to help them—only to fall victim to sexual assault, abuse, kidnapping, extortion, and even ransom.”

CRC spoke with Guadalupe Correa-Cabrera, Associate Professor at the Schar School of Policy and Government at George Mason University and an expert in immigration and organized crime. Dr. Correa-Cabrera told CRC that many Central American migrants—including those in the 2018 caravans—were falsely informed that they could receive U.S. asylum, a conclusion she reached after speaking with multiple people in Tijuana critical of the caravan organizers.

One of those people is Alejandro Solalinde, a Mexican priest and immigration activist who alleged that Pueblo Sin Fronteras had impeded him from warning caravan members against seeking asylum in the U.S. since most would not qualify for it. “Pueblo Sin Fronteras cheated the migrants; they told them lies that once they arrived at the border, everything would be very easy,” Solalinde told the Los Angeles Times. “Pueblo Sin Fronteras has no scruples,” he added in the Mexican newspaper SinEmbargo.

“Father Solalinde is probably the most respected and best-known migrant advocate in Mexico,” Dr. Correa-Cabrera told CRC. “Under current U.S. law, it is a fact that very few of those Central Americans who apply for asylum will be able to get it and prove their cases successfully. Most will probably be deported in the end or remain in the shadows in the United States.”

Dr. Correa-Cabrera blames many NGO’s operating in America, Mexico, and Central America for leaving migrants with false hope and exposing them to the dangers of drug cartels and criminal violence.

“This ‘caravanization’ of undocumented immigration has clearly been fed by those who accompany the migrants,” she said, “providing them with the means to travel en masse and incentivizing them with dreams [of asylum] that will never be achieved while putting women and children at great risk.”

“Caravan organizers in collaboration with some self-defined ‘activists’ are encouraging a very dangerous journey in which migrants and refugees are exploited by corrupt authorities and criminal groups,” Dr. Correa-Cabrera added. “This inhumanity has to end.”

In late November, MSNBC journalist Gadi Schwartz reported from the migrant caravan camp in Tijuana, Mexico, that many migrants had joined the caravan after being falsely told that there were “work programs that they would be eligible for” in the United States. After realizing that there were no such programs and it wouldn’t be easy to cross into the U.S., Schwartz said, “some of them are deciding to turn back” and return to Central America.

In a December 29th op-ed in The Hill, Correa-Cabrera and former Obama administration CBP Commissioner Alan Bersin criticized the prevailing media narrative on the Left that the October caravan had been spontaneously generated: “. . . it has become clear that the organizations which brought the caravan to Tijuana have brought no benefits to the migrants themselves. To the contrary, migrants have been exploited as political pawns and left helpless in an increasingly hostile Tijuana.”

Whatever your politics, there’s one thing liberals and conservatives should agree on: there’s nothing humanitarian about false promises that get desperate migrants abused or killed.