I Do Not Want the NewsGuild Bargaining for Me, Ever 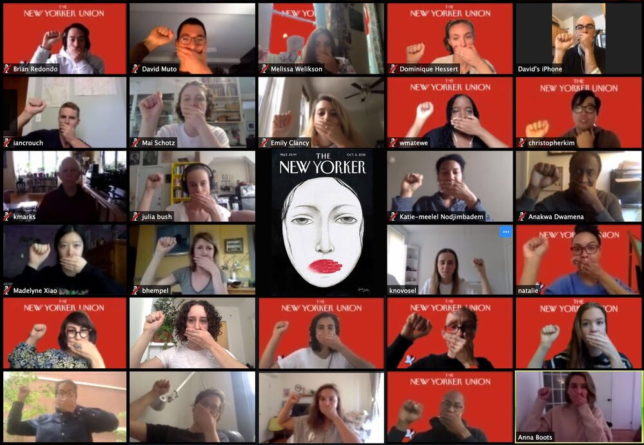 The worst idea proposed by the “labor conservatives” at places like American Compass is a procedure known as “sectoral bargaining,” under which labor unions and industry associations negotiate a contract for an entire industry covering union members and non-members alike. For writers like me, that means that the NewsGuild-CWA would negotiate our pay and benefits whether we wanted that “privilege” or not.

On Wednesday, the NewsGuild representatives at the New Yorker made very clear why opposing sectoral bargaining is crucial. They tweeted: 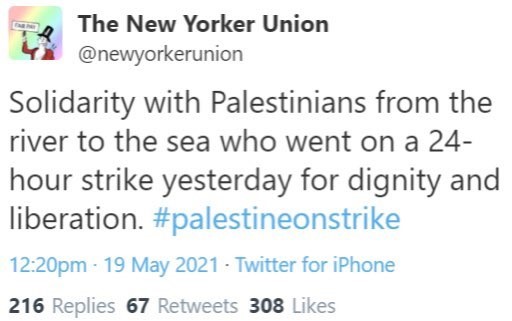 Conservative writers, do you want these people negotiating on your behalf? Because I don’t. But under sectoral bargaining, they would.

The tweet is more than just anti-Israel politics, which should be expected from a unit of one of America’s most socialist-aligned labor unions. The CWA is deeply tied to political operation of socialist Sen. Bernie Sanders (I-VT), and former CWA president Larry Cohen chaired Sanders’s Our Revolution post-campaign advocacy group.

The “river to the sea” slogan of Palestinian extremists is a direct call for the elimination of the State of Israel entirely, as anyone who has looked at a map can easily see. The entirety of Israel, not just the disputed Palestinian territories in the West Bank and Gaza Strip, lies between the Jordan River and the Mediterranean Sea. Hence, Palestinian extremists who seek Israel’s annihilation and the destruction of the world’s largest Jewish population chant the slogan.

Sometime Wednesday evening, the New Yorker Union NewsGuild-CWA became aware of the slogan’s genocidal intent—or at least the potential public relations fallout—and deleted the “river to the sea” statement but reaffirmed the union’s “solidarity” with the Palestinian-aligned hard-Left. Its communications officers apparently thought the original tweet was just garden-variety hard-Leftism worthy of the union’s socialist parent.

Whose Side Are You On?

And that brings me back to “sectoral bargaining.” Under sectoral bargaining as practiced in France, unions have the power to negotiate wage and working standards ostensibly on behalf of all workers in entire industries, even those who refrain from union membership. As a result, over 98 percent of French workers are subject to union contracts despite only about 8 percent of French workers being members of unions.

Yes, the supposedly constantly striking French are less likely to be union members than Americans. But because of sectoral bargaining, the unions have much more institutional power in France than they do in the United States. There lies the problem with supposed conservatives advocating the “sectoral” approach: Do they really trust the labor unions institutionally? This week, the NewsGuild sent a clear signal that their answer should be “Not just no, but heck no.”