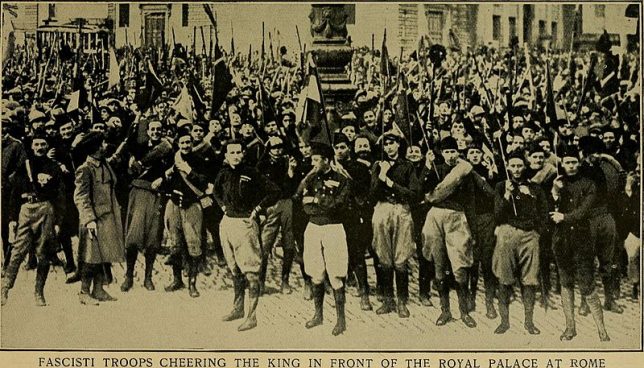 Last night, there were violent protests at Berkeley University against guest speaker Milo Yiannopoulos of Breitbart News. Occupy Oakland tweeted “We won this night. We will control the streets. We will liberate the land. We will fight fascists. We will dismantle the state. This is war.” What was so interesting was the “we will fight fascists.” Occupy Oakland, and many left wing groups, appear willing to have a revolution to halt a supposedly imminent fascist takeover of the country.

Which begs the question: how do fascists take over?  The answer can be found by looking at the three major fascist countries in history: Italy, Spain, and Germany.

Under the leadership of Benito Mussolini, the Fascist Party of Italy seized control of the country in 1922 with the “March on Rome.” Before marching on the nation’s capital, Italian fascists committed violent acts across most of northern Italy. The king of Italy, fearing more bloodshed, appointed Mussolini Prime Minister of Italy. No election took place, and the Italian fascists used violent tactics to achieve power.

Spanish fascists came to power through a military coup, after the military leadership did not like the results of the most recent election, and the coup resulted in a civil war lasting from 1936 to 1939.

In Germany the fascist path to power was longer and more complicated for the National Socialists, or Nazis. Hitler attempted to mimic Mussolini in 1923 with the Beer Hall putsch, an attempt to overthrow local authorities. It did not succeed and resulted in a few deaths and the arrest of several Nazis, including Hitler. After the failed coup, the Nazis decided to use the democratic process to take over Germany. Yet not until the election of July 1932 did the Nazis become the largest party in the German Parliament. Despite winning a plurality of votes (37 percent), the Nazis did not receive a majority of the votes needed to form a government. The Nazis refused to join any coalition, which resulted in another election in November 1932. In that election the Nazis again won a plurality but not as large as before (only 33 percent). Despite the loss, the Nazis refused to form a coalition until Hitler was made chancellor, which occurred in January 1933. Once Hitler was chancellor, he ordered another parliamentary election.

In March 1933, the election was held and the Nazis again received only a plurality of the votes (43 percent). This would be the last open election until after World War II, because Hitler decided it would be easier to consolidate power through terror, fear, and even political murders, rather than trying to work with other parties.

So, what’s the pattern? How do fascists take power? First, they are angry with election results or how the country is being run. Then fascists use militant tactics to force the population into supporting, or acquiescing in, their cause, even though most citizens don’t actually support the fascist agenda.

Today, some persons who claim to oppose fascism have started using fascist techniques, such as blockading roads and other modes of transit into the city, perpetrating violence against those who disagree with them politically, and using fear to suppress those who have different political views. But using fascist techniques is never right, and if you just removed “we will fight the fascists” from the Occupy Oakland tweet, it could be easily mistaken for a quote from Benito Mussolini, Francisco Franco, or Adolf Hitler.

The best way to defeat fascism? Look to the U.S. Constitution. It has defended freedom—and helped expand freedom to many—since it was signed. If Americans hold their elected officials to the standard of the Constitution, then fascism will not happen. If Americans decide to fight fascism with fascist techniques, then they will become the very thing they wanted to stop.

Tyler Stone received a Bachelor’s Degree from Le Moyne College, where he studied history. He is currently Office Manager at Capital Research Center.