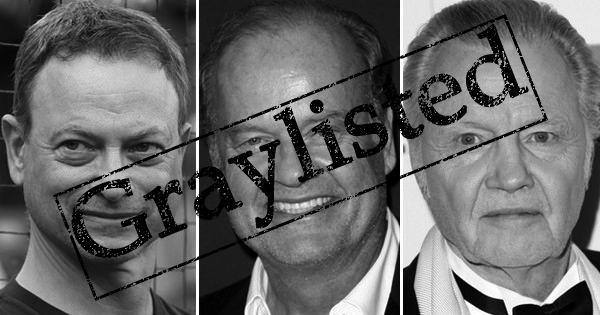 Some Hollywood entertainers—like Clint Eastwood and Jon Voight—are outspoken about their conservative beliefs, but others shy away from any political involvement whatsoever. Producer-actor Mel Gibson, for example, is widely known for his belief in traditional Catholic teachings; yet he has no record of involvement in any cause that could tag him as a conservative. The same goes for Mark Burnett, the producer of the popular television series “The Bible.”

Why the low political profiles? Because Hollywood liberals are notorious for “blacklisting” and “graylisting.” The former occurs when those who identify as Republican or conservative are denied employment because of their political views. As singer-actor Pat Boone explained, “A friend of mine who was having difficult obtaining parts said he knew for a fact the reason was because the studios knew he was an active Republican.” (That unidentified Republican turned out to be the late Victor Jory, who played Jonas Wilkerson in Gone with the Wind.)

The latter—so-called “graylisting”—occurs when a self-identified Republican or conservative isn’t denied work forever, but instead faces reluctant producers who would rather try other options. In Evan Sayet’s words, “If they know you’re a conservative—or even more devastating, an active conservative—they would just not rather work with you and unless you’re a big name—and therefore, a commodity—it’s easy for them to just go to the next guy on their list of ‘preferred’ talents and use them instead.”

Fearing job discrimination, Friends of Abe (FOA)—the now-disbanded fellowship of Hollywood conservatives—was even forced to keep its list of members a secret.

It goes to show that liberal Hollywood is anything but a safe space.

For more, you can read the May edition of “Organization Trends” here.

This blog post was adapted from the May edition of Capital Research Center’s “Organization Trends,” by John Gizzi.