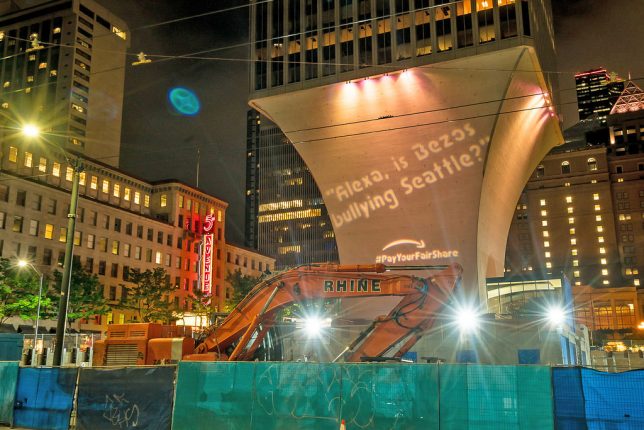 Amazon kicked the hornets’ nest last week. The online retailer halted plans on the construction of one of its new buildings in Seattle, in response to a proposed “head tax,” a tax on employee hours worked, which would affect companies that bring in more than $20 million a year in gross income. The city plans to use the funds raised to address the homelessness crisis in Seattle, which has escalated to the point that it was declared a state of emergency in 2015.

Now many in Seattle who benefited from the city’s economic boom—created in part by Amazon—are outraged. Seattle City Councilor Kshama Sawant, a self-proclaimed socialist and member of a Trotskyite political party, has been particularly bullish on the tax, which will affect the top 3 percent of companies in Seattle.

While Sawant may have no respect for a number of Seattle job creators, Amazon is the entity she seems most interested in targeting. In a March editorial, she wrote:

We want to address the housing and homelessness crisis by going to where the money really is: with Amazon and the other wealthiest corporations in Seattle. Amazon scandalously received a $789 million windfall this year on old unpaid taxes just from Trump’s corporate tax cuts. In Seattle and Washington State, a greater portion of the tax burden is piled onto the shoulders of poor and working-class people than in any other state in the country.

Just in case it wasn’t clear, she followed up: “Our priority should be to build the strongest possible movement to win the largest tax on Amazon and other big business.”

This seems particularly thankless given that Amazon employs over 40,000 people in Seattle and that it helped revitalize the South Lake Union area of the city. Never mind that Amazon’s presence spurred economic growth in the city beyond the revenue it already pays in taxes and that the boom in Seattle means that the city’s unemployment rate is around 3.5 percent—below the national unemployment rate of 3.9 percent. This suggests that housing prices, and not necessarily unemployment, are the principal contributor to the homelessness crisis.

However, with high employment and a booming economy, Seattle should have enough revenue coming in from sales taxes, its new soda tax, and other traditional tax sources to address this issue. Seattle has already set aside $50 million in taxpayer funds to combat homelessness. Despite these efforts, homelessness is increasing. The $15 minimum wage also doesn’t seem like it will be a solution to the problem—estimates suggest the hike, not fully in force, has already cut low-wage workers’ pay by $125 per month on average.

Whenever progressives suggest taxes on things like soda or cigarettes, they argue that such levies will contribute to better overall public health because increasing the price of something enough will diminish the demand for it. Why would a tax on jobs be any different?

By increasing Amazon’s tax burden by essentially penalizing the company for employing people, Seattle has sent a message to the world’s most successful online retailer: we don’t want jobs. Halting plans on its new building is just one way Amazon has demonstrated that it received the message.

Amazon has more alternatives to paying the tax than the City Council wants to admit. The company is already looking for a second headquarters and some cities and states are embarrassing themselves as they attempt to lure the tech giant to build and spur their local economies. Regardless of how you feel about the possibility of HQ2 coming to your town (on taxpayers’ dime), it does send a message that Amazon isn’t necessarily anchored in Seattle.

Automation has come for many jobs, and while it is unlikely Amazon could replace all of its employees with robots and software plugins, the Emerald City has just incented Amazon to look for alternatives to human labor. It might be harder to automate an Amazon employee, but if McDonald’s response to the $15 minimum wage is any indicator, Amazon might be willing to invest in automating or outsourcing more of its jobs.

Already the announcement has sent a rift between Seattle’s labor unions. The Iron Workers Local 86 came out in force against Councilor Swant, rightly fearing that the tax would affect their construction jobs. On the other side, SEIU 775 and an AFL-CIO local union advocacy federation (Martin Luther King County Labor Council) have endorsed the tax. One thing is certain. No one can afford to lose a job in Seattle and the Emerald City doesn’t want to increase its homeless population with unforced errors.

After a weekend of high-stakes negotiations, Seattle’s City Council somewhat blunted the impact and minimized the tax after Mayor Jenny Durkan threatened to veto the original proposal. This compromise will still generate about $47 million for the Emerald City. But what will it cost? Amazon has resumed construction plans for now, but that doesn’t mean the retailer plans to remain in Washington. It’s possible the company will lease out the completed space and chose to expand instead in the yet-to-be-determined home of HQ2. If Amazon does go seeking greener pastures, Seattle will only have itself to blame.