To implement its War on Coal and a Global Warming treaty, the administration tries an end-run around the Constitution

In a rush to end the production of inexpensive electricity from coal—a policy that would hamstring the economy—the Obama administration is ignoring the constitutional requirements for international treaties. That’s because it sees the latest international agreement on Global Warming as a way to help defend its sweeping new regulations on generating electricity, which are themselves unlawful under the Clean Air Act. The administration is daring Congress to stop its unilateral actions on treaties and its blatant disregard of existing law. 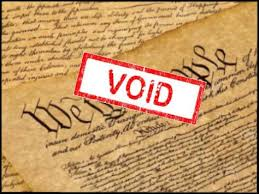 The world is rushing headlong toward an international agreement (supposedly) to fight Global Warming, to be finalized in Paris at the end of this year. Even from the perspective of environmentalists, the deal won’t do much to fight Warming. That’s because, among other reasons, it’s highly unlikely that there will be any way to enforce the agreement other than by “naming and shaming” violators.

But to the Obama administration, the upcoming deal represents a prime opportunity to do another end-run around the Constitution—to impose major restrictions on the American economy through an international agreement, while ignoring the requirement that treaties be ratified by the U.S. Senate.

That pesky Constitution and the Clean Air Act stand in the way of the administration’s so-called Clean Power Plan, the key component in its War on Coal.

The UN Framework Convention & Kyoto
First, some background. The 1992 United Nations Framework Convention on Climate Change (UNFCCC), formalized at a conference in Rio de Janeiro, was in effect a treaty to create treaties, an effort to create an international regime that would supposedly deal with the threat of Global Warming.

After the UNFCCC agreement, also known as the Rio Treaty, was submitted to the U.S. Senate by the George H.W. Bush administration, Senators ratified it in October 1992 on a voice vote with no debate, just as they rushed to leave Washington before the November election. As the Los Angeles Times put it on October 8, 1992: “With the 102nd Congress driving for adjournment, the controversial treaty was cleared for President Bush’s signature almost unnoticed.” With Bush’s signature, the U.S. became the first industrial nation to ratify the treaty.
Bush’s EPA administrator, William K. Reilly, had been so confident of ratification that, earlier that week, he had sent out a press release praising the Senate’s action, with an embargo delaying publication until ratification actually occurred.

UNFCCC set up a series of Conferences of the Parties, with the first ones held in Berlin, Germany in 1995, Geneva, [For the rest of the story, click HERE.]