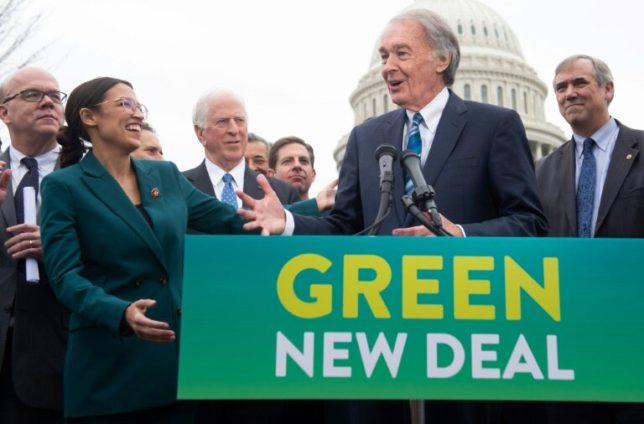 Sponsored by a half-dozen 2020 Democratic Presidential candidates, the U.S. Senate’s copy of the Green New Deal (GND) clearly reflects some important fraction of the Democratic Party’s soul. When informed the Republican-controlled Senate would call it to a vote this spring, Democratic Senate Minority Leader Charles Schumer initially said: “bring it on.”

But as the vote draws near, Schumer is now saying “everyone knows this bill is a sham.” In truth, the Green New Deal reveals the Democratic Party’s commitment to cutting carbon dioxide emissions (CO2) has been a sham. But worse for all of us, it shows the far left has much more influence over the Party’s direction than does Sen. Schumer.

Consider the two organizations most enthusiastic about the bill. Justice Democrats and the Sunrise Movement, are positioned well to the left fringe of conventional Democrats. Together with the bill’s author, Rep. Alexandra Ocasio-Cortez (NY-D), they created the Green New Deal. Justice Democrats literally exists to defeat mainstream Democrats in primaries and replace them with socialist-leaning candidates such as Ocasio-Cortez.

Yet, the far-left fringe Green New Deal is sponsored by nearly 90 Democrats in the U.S. House, and 11 in the Senate. What Schumer dismisses as a “sham” is a real-deal agenda item for 2020 Democratic Presidential candidates Bernie Sanders, Elizabeth Warren, Kamala Harris, Cory Booker, Kirsten Gillibrand and Amy Klobuchar.

In its entirety, the full proposal reveals the CO2 component to be just one expensive item on an impossibly costly wish-list that includes government-guaranteed jobs, wages, paid vacations and health care. Specific leftist goodies include cross-continental government super-trains that even California’s profligate politicians can’t stomach, and fat new laws to shore up big labor unions that are top donors to Democrats. Credible estimates for ten years of this financial malfeasance run as high as $93 trillion, or roughly one year of economic output for the entire planet.

The proposal says its payoff is worth the pain: “Federal Government-led mobilizations during World War II and the New Deal created the greatest middle class that the United States has ever seen . . . .”

But what the post-War American middle class truly benefitted from was nearly identical total war economies in Japan, all of Europe, and the Soviet Union. These “government-led mobilizations” battered or obliterated the industrial spines of every major developed nation except the United States. The unpleasantness for everyone else gave U.S. workers a fortuitous opportunity to benefit from sewing the Earth’s tattered economy back together.

Obviously, this is not an exercise we should or could repeat.

But even just the Green New Deal’s energy policy plans are unrealistic. Under the most conservative estimates, it is a ten-year, $10 trillion plan to reconstruct our energy network to achieve “net-zero greenhouse gas emissions.” That price tag is about $120,000 for every household of four, or enough to buy each household a modest home.

What Americans get in return is “. . .  dramatically expanding and upgrading renewable power sources . . . .”

After significant government support for wind and solar during the Obama Administration, 2016 data showed Americans deriving just 6.5 percent of total electricity from these sources. Puny… but a full percentage point higher than the French! We’ve already been trying, but government spending cannot make the wind blow or the sun shine reliably.

Yet the French, with the world’s sixth-largest economy, are far ahead of the U.S. in keeping CO2 emissions low. Because while Americans get just 20 percent of their total electricity from nuclear energy, French nukes provide 75 percent of the nation’s electricity.

The seriousness of the impact of climate change is far from settled, and there’s a good case to be made that American taxpayers shouldn’t be subsidizing any form of electricity. But if sharply reducing CO2 were really a national crisis in need of immediate attention, then a crash program to ramp up CO2-free nuclear power is the obvious place to direct dollars.

Unlike wind and solar, nuclear power is a certain and reliable route to cutting CO2 emissions. Even with more limited use, nuclear power already accounts for 63 percent of the U.S.’s carbon-free electricity.

Such seriousness is missing from the Green New Deal. The text mentions only so-called “clean” and “renewable” energy—leftist newspeak that excludes abundant, but non-renewable radioactive material. Nuclear energy is specifically rejected as a solution and targeted for phase-out in talking points released to media for the U.S. House’s identical resolution.

The Green New Deal already demonstrates that nearly 100 members of Congress are not serious about controlling CO2 emissions, yet very serious about implementing a voraciously expensive far-left agenda to tear down and rebuild the U.S. economy. That group, which includes six 2020 Presidential candidates, has made clear their intentions if they win over the White House and the Congress.

Americans deserve an up or down vote (no weasel-out voting “present”) from the senators who would be president. Sen. Schumer was correct the first time: “bring it on.”