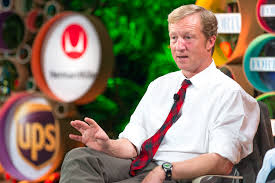 The midterm elections serve as an opportunity for both the Democratic and Republican parties to take stock of what they stand for in the coming years—or at least what they need to do to win elections. One useful indicator of intra-party dynamics is the ebb and flow of political donations. By this measurement, the far Left seems to be enjoying a resurgence in 2018. This time around, leftist billionaire donors such as George Soros and Tom Steyer are funding the more extreme elements of the Democratic Party in competitive primary races.

George Soros, the hedge-fund billionaire with a passion for left-wing activism has a long history of funding the professional Left through his Open Society Foundations. Soros tries to work his will throughout international politics, funding left-liberal causes in Europe, the Middle East, and the United States. The scale of his interventions (Soros recently announced an $18 billion bequest to OSF, on top of his existing and non-foundation left-wing financing) has made use of his name a rallying cry of the Right.

Environmentalist Tom Steyer was already the highest U.S. political spender in both the 2014 and 2016 election cycles. Using his Super PAC, the NextGen Climate Action Committee, Steyer contributes millions of dollars to support candidates pushing regulatory policies aimed at restricting energy use to combat climate change. The PAC has a long history of using Steyer’s financial weight to prop up political candidates and ballot measures, despite his fellow Democrats railing against Citizens United v. FEC (which affirmed the First Amendment Rights of organizations to engage in the political process). More recently, Steyer has targeted President Donald Trump, hoping to have him impeached, something some members of the Democratic Party leadership are trying to avoid.

Competitive swing states such as Florida, Colorado, Nevada, Maine, and Minnesota have been the focus of the hedge fund giants’ political spending this year. On the whole, Soros and Steyer seem to favor the less moderate and more radical candidates in the Democratic primaries. Steyer in particular took an interest in Tallahassee Mayor Andrew Gillum, Democratic nominee for Governor of Florida. Defying his usual no-interference policy during primary elections, Steyer spent over $800,000 in order to push Gillum, who he believes, “would represent a real step forward for Florida.”

The Democratic Party has steadily veered toward the political left due to the intense enthusiasm of young Democratic voters hostile toward the Republican-controlled Congress and President Trump. The popularity of Bernie Sanders and the unexpected successes of the Democratic Socialists of America (DSA) are indicative of this phenomenon. Gillum tailored his platform to this far-left base, despite Florida’s traditional position as a “swing state.” He pushes Medicare for All, a $15-an-hour minimum wage, and a massive increase in public education spending through a $1 billion tax on the private sector.

Since Gillum’s primary victory, Steyer has already directed another $5 million into the general election and has been hastily registering students on University campuses through NextGen PAC. Already, it reports that more than 230,000 millennials have registered, indicating that capitalizing on this left-wing enthusiasm has real potential. Steyer himself has vocally adopted the rhetoric of the far-Left, recently stating that Republicans who supported Judge Kavanaugh during his Supreme Court nomination were “a group of very rich, very entitled white men,” which while a demonstration of little self-reflection, certainly shows Steyer’s adept appropriation of leftist talking points.

While the elections in Florida are particularly indicative of this ideological shift in the Democratic Party, Florida is only a proxy war for the reinvented political parties. For that reason, Soros and Steyer have invested heavily in Gillum, but the trend-setting donors certainly are diversifying their campaign portfolios. The two have come together to jointly fund a Super PAC that funds left-wing candidates in vulnerable states, State Victory Action. This well-known organization in Democratic circles, receives more than 70 percent of its multi-million-dollar budget from the two megadonors. As of October, Soros and Steyer have so far contributed $1.7 million through State Victory Action alone. But the IRS shows that the Super PAC has a war chest of over $14 million, a massive sum waiting to be spent in this election or in future campaigns.

Already, State Victory Action has donated $500,000 to support the Colorado Democratic nominee for Governor Jared Polis through a “527” independent expenditure committee, Good Jobs Colorado. KUSA, a local Colorado television station criticized the Super PAC for running a negative ad that falsely suggested that the Republican candidate Walker Stapleton missed crucial board meetings for the state public employees’ pension system to go golfing. The two megadonors also contributed $1.4 million to advertise against former Minnesota Governor Tim Pawlenty (R), during the state’s Republican primary, which he lost by just over 28,000 votes. Outside of Minnesota, the State Victory Action Super PAC has already made contributions to elections in Maine, New Mexico, and Nevada.

Complaining about money in politics in many ways resembles complaining about the weather, it only really matters in extreme cases. Soros, Steyer, and other extremely wealthy donors keep the wheels of the Democratic political machine spinning.  As The New Yorker writer Benjamin Wallace-Wells said about the mindset of Democratic candidates like Gillum: “The dream was that one meeting with Tom Steyer might get you a million dollars and spare you a hundred conversations with orthodontists, who each had a few thousand to give.” During this transition time within the Democratic Party, the fact that the party’s biggest donors have shifted to the left is an indication of what may come in the next political party alignment.