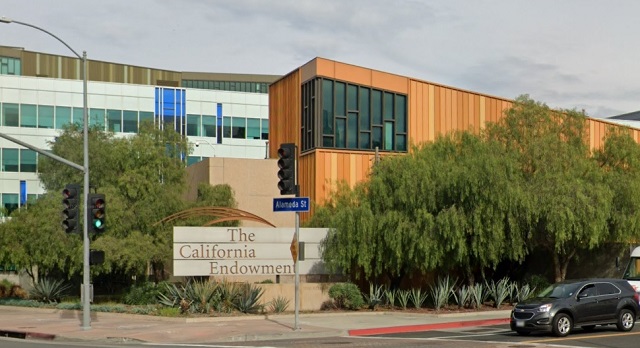 In 2021, we learned that absolutely anything can be labeled “infrastructure.” Ditto for “public health.”

That’s evidently the lesson we’re to take from the California Endowment, a massive nonprofit born of the health care industry, that uses its vast wealth to support “social justice” campaigns and defund-the-police efforts. It’s a lesson in what passes for modern “philanthropy” among today’s West Coast elites.

The California Endowment is a 501(c)(3) health conversion foundation (also called health legacy foundations), a kind of organization resulting from the merger of not-for-profit and for-profit health care providers or when a not-for-profit converts into for-profit organization. Since those two corporate formats operate under different IRS rules and requirements, it’s common for them to spin off a big chunk of their assets into a new charitable foundation.

There are roughly 400 such conversion foundations in the country, and their histories can be a jungle to navigate. The California Endowment, one of the largest, was chartered in 1996 by the state following the merger of the for-profit Wellpoint Health Networks with Blue Cross of California, a nonprofit dating back to the 1930s.

The Blue Cross nonprofit model was pioneered in 1929 in Texas as a way to provide affordable hospital coverage and close gaps in health care coverage. They exploded in the 1930s as numerous states passed enabling legislation, creating a crop of charitable groups including the two that eventually merged in the 1980s to form Blue Cross of California. (This is also the origin of California’s Kaiser Permanente Health Plan, an early HMO named for the builder Henry J. Kaiser, whose construction company led the first successful prepaid medical plan for 5,000 workers building the Colorado River Aqueduct.)

In 1993, Blue Cross of California transferred the bulk of its assets to Wellpoint, its for-profit subsidiary, which attracted the attention of state regulators arguing that it had improperly protected its charitable assets. Negotiations with the state culminated in Blue Cross transferring $3.2 billion to two newly formed organizations: the California Endowment and California Healthcare Foundation, a 501(c)(4).

Interestingly, the (c)(4) is far less political in its grantmaking than the (c)(3), although it’s paid close to $10.3 million in grants to the Tides Foundation and Tides Center since 2005. Tides is a key pass-through funder to other left-wing groups, funneling hundreds of millions of dollars in grants each year through a nexus of nonprofits. The Tides Center specializes in incubating new activist groups in its swanky San Francisco Presidio offices.

The California Endowment is an even larger donor to left-wing causes that have little-to-nothing to do with health—little wonder it’s included among the liberal website BlueTent’s list of “private foundations supporting progressive causes.” Since 2010, it’s paid out:

The California Endowment’s left-wing bent extends to defunding the police, too. As the Chronicle of Philanthropy reports, California Endowment spent $5 million in 2020 supporting “black-led organizations working on law-enforcement issues,” which includes a “cut[ting] police spending.” In total it plans to spend $225 million pushing “racial justice.”

Is that a public health concern? Only if your definition of philanthropy—like “infrastructure”—is so mushy it can mean pretty much anything.

CRC intern Guzi He contributed to this report.