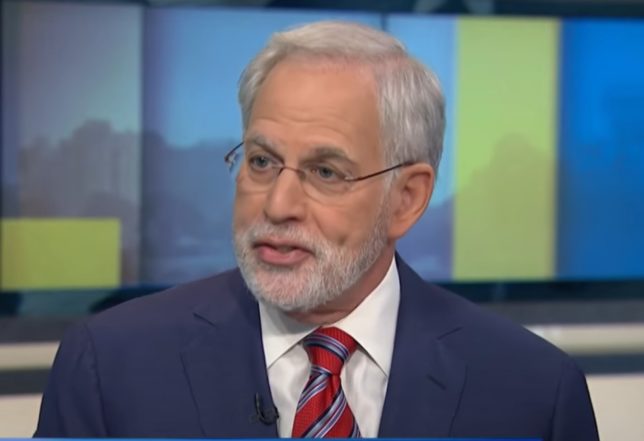 Thanks to the smashing success of Netflix original films such as The Irishman and Peaky Blinders, stories of the mob and organized crime have regained a seat at the fore of the public’s imagination. Many believed the genre had reached its creative limits, becoming worn out and clichéd over time as it gradually lost relevance.

But traces of the mob are still alive and well in the real world, and one organization with questionable origins—the Philip and Janice Levin Foundation—is rapidly making a place at the heart of American left-wing organizing. The foundation is armed with more than $25 million in mob-tainted money and has launched ruthless media smear campaigns against several conservative organizations, ironically saying they are backed by corrupt corporate money.

Hoffa and the Teamsters

In the late 1960s, Jimmy Hoffa was nearing the violent end of his reign over the International Brotherhood of Teamsters, one of America’s most powerful labor unions to this day. During this time the Teamsters, under the proxy rule of the Italian mafia, made a $16 million loan to a real estate development company called Transnation, owned by Philip Levin. According to Gus Russo’s 2006 book, Supermob: How Sidney Korshak and His Criminal Associates Became America’s Hidden Power Brokers, Levin was well known as a “wise guy” in mafia circles. He was closely tied to New Jersey mobster Sidney Korshak and the Genovese crime family, one of the infamous Five Families that dominated organized crime in the New York and New Jersey area. The Genovese crime family was infamous for its brutal loansharking and extortion tactics and was the first family known to use “barrel murder,” in which a victim was executed, stuffed into a barrel, and shipped to a far away or nonexistent destination.

Allegedly thanks to his mafia connections, Philip Levin’s real estate business experienced a meteoric rise, and Levin made hundreds of millions of dollars on numerous business ventures closely tied to the mob and money laundering, including casinos, race tracks, hotels, and real estate.

The New Jersey attorney general’s office strongly suspected that Levin was in bed with the mob but could never make any charges stick. This was partially due to the unusual alibi Levin offered investigators. When questioned about phone records showing over 35 phone calls from Levin’s home to Angelo “Gyp” DeCarlo’s home, a lieutenant of the Genovese crime family, Levin testified that the phone calls were merely social calls from his son, Adam, to DeCarlo’s son.

Adam Levin was later appointed head of the New Jersey Department of Consumer Affairs mere months after graduating law school in 1974. He was appointed by the New Jersey attorney general, who was coincidentally the head of the task force on organized crime that had failed to convict the Levins. The appointment of a mobster’s son to a high-ranking position in the government by the attorney general in charge of investigating the mob certainly raised eyebrows and suspicions.

Then, in 1982, Adam launched a campaign for Congress as a Democrat in New Jersey. According to Federal Election Commission (FEC) records, Levin almost entirely self-funded his campaign. The millions of dollars of his own money almost certainly came from his father. Unsurprisingly, the mob thought having a congressman in their pocket was an attractive prospect, for which they were willing to pay. Although Adam ultimately lost the election, he never fully retired from politics.

After his mother’s death in 2001, Adam became president of the Philip and Janice Levin Foundation, which has more than $25 million in assets, according to its most recent public disclosures. It even owned an extravagant art collection including pieces by Degas, Piccaso, Monet, and Renoir. The foundation gave most of its grants to the arts and charities around New York and was essentially used as an accessory to the Levin family’s socialite lifestyle. In 2014, however, the foundation began to dip its toes into left-wing activism.

In May 2016, after accepting two $40,000 grants from the Levin Foundation, Common Cause published the report “The Dangerous Path: Big Money’s Plan to Shred the Constitution.” The report focused on the Article V constitutional convention movement, a rapidly growing movement in conservative and libertarian circles that advocates for states to call a second constitutional convention under Article V of the Constitution. By doing so, advocates hope to pass constitutional amendments, such as a balanced budget amendment requiring Congress to balance the budget every year or more extensive amendments aimed at reforming and limiting runaway spending on entitlement and welfare programs.

The Common Cause report calls the movement dangerous and ill-advised, even claiming it is a ploy by corporate interests to rewrite the Constitution to serve their interests. The report’s acknowledgements credit the Levin Foundation as a major source of funding and impetus for the report. This strongly suggests that the Levin Foundation took a unique interest in discrediting the Article V movement. While no one currently associated with the foundation has any known active mob affiliations, the Levin foundation’s roots in organized crime make it unsurprising that they hired what is essentially a “political hit squad” to do the job.

As left-wing political hit squads go, Common Cause is among the best. The group has a long history of carrying out “political lynchings” on conservative organizations and leaders by making wild accusations of unethical behavior and corruption. Common Cause is also closely tied to the Center for Media and Democracy (CMD), another left-wing watchdog group where many of Common Cause’s employees had worked previously.

One such employee is Jay Resitenberg, Common Cause’s current deputy communications director, who authored the scathing “big money” report and whose full-time job, according to Common Cause’s website, is specifically to cover and investigate the fledgling Article V movement. Resitenberg has written dozens of other pieces attacking the Article V movement. CMD, Reistenberg’s former employer, has done the same.

PR Watch, a CMD project, has published several articles attacking organizations in the Article V movement, such as the Convention of States project and Citizens for Self-Governance, for receiving funding from wealthy conservative donors. SourceWatch, one of CMD’s pet projects, even has a detailed profile on the Convention of States that criticizes the organization for being “steeped in evangelical Christianity and backed by millions of dollars in dark money.”

This intense fixation on a relatively small movement suggests that a highly influential and wealthy organization is intent on seeing the Article V movement fail. The Levin Foundation is apparently that organization.

The Levin Foundation also provided $50,000 in funding to Media Matters for America, another left-wing watchdog group that targeted the Convention of States project in a lengthy article four months before Common Cause published its report.

The Levin Foundation’s stealthy campaign against the Article V movement has been so effective that it may have even persuaded some conservative organizations. The John Birch Society, which has a history of overzealously attacking fellow conservatives, has a webpage dedicated to stopping a convention of states and has repeatedly criticized the Convention of States project, unaffectionately dubbing it “the Con-Con.”

All the candidates and organizations on the Left that have taken Adam Levin’s money have one thing in common: They universally condemn the influence of corporate money in politics. Nearly every candidate Levin has financially backed has expressed support for overturning Citizens United, and the left-wing watchdogs his foundation has supported universally consider its overturn one of their primary objectives. Apparently, despite their avid opposition to “dark money” in politics, they have no qualms about accepting money tainted by connections to the mob. Underneath the mask they present to the public, none of these organizations is really what it claims to be.

In the bygone age of the mafia, someone who “painted houses” was a hitman, taking something “to the cleaners” meant money laundering, and offering a neighborhood “protection” meant extortion. Today, the Left has developed an entire lexicon of euphemisms meant to conceal their true intentions. “Watchdogs” are journalistic hitmen, “dark money” is any money from conservatives, “grassroots” means orchestrated by a DC political machine, “promoting civic engagement” means getting Democrats to the polls, and “addressing the climate crisis” means a government takeover of the economy.

The language is dizzying to track. And more euphemisms seem to be churned out every day, muddying the political discourse until it is hard to tell what anybody in the world of left-wing activism really does anymore. But perhaps that’s the way the Left likes it. When nobody knows exactly what the other guy really does, it makes for a lot fewer loose ends. The tactic certainly worked for the mob, and it appears that the Left hopes it will work for them as well.

Some have speculated that The Irishman will be the last of the great mob movies, but the Levin Foundation and the left-wing watchdog machine show that the genre may still have a rich future.

Parker Thayer is a research assistant at Capital Research Center. A native of Michigan, he recently graduated from Hillsdale College.
+ More by Parker Thayer