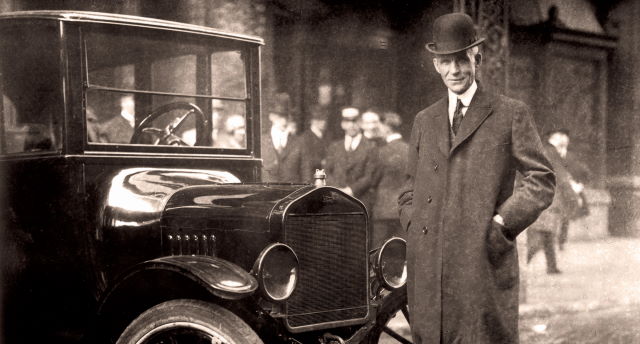 The enormously influential billionaire escaping the Big Media’s critical eye is Henry Ford, the Ford Foundation, and the people spending the fortune left by the auto pioneer. License: Public domain.
by Ken Braun

Summary: One “lefty” billionaire that has been exerting a big influence on our politics for decades and yet escapes nearly all media scrutiny. This is more striking because Henry Ford died in 1947 and didn’t develop his left-leaning politics until after his death. The people spending his money give to left-leaning groups advocating for all manner of left-leaning policies. Things were bad in 1977, when Henry Ford II, grandson of Henry Ford, loudly resigned from the foundation’s board, sniping on his way out that the well-heeled staffers had no appreciation for the capitalist system that left them so much loot to play with. The Ford Foundation has continued its march to the left.

Big media has a big obsession with big money in politics. Google “Koch brothers” and you’ll unleash a torrent of negative-spin stories from the conventional titans of print and broadcast media. Try it with “George Soros” and the torrent slows to a trickle.

But there’s one “lefty” billionaire that has been exerting a big influence on our politics for decades and yet escapes nearly all media scrutiny. This is more striking because he died in 1947 and didn’t have left-leaning politics even when he was alive. The enormously influential billionaire escaping the Big Media’s critical eye is Henry Ford, the Ford Foundation, and the people spending the fortune left by the auto pioneer.

Earlier this year the folks at Ford shipped a $2 million grant off to Blueprint NC, a tax-exempt North Carolina nonprofit with a left-leaning political agenda. Today, a legal disclaimer at the bottom of the group’s webpage states it is “a public charity” that is “strictly prohibited from participating or intervening in any political campaign” and that its “activities will be strictly non-partisan.” But the very name is a partisan metaphor: Blueprint NC’s mission is to (politically speaking) turn the state “blue.”

In 2013, the Charlotte Observer revealed that Blueprint NC circulated a strategy memo to its lefty allies describing a plan to “weaken our opponents’ ability to govern by crippling their leaders.” The missive specifically named its targets: North Carolina’s then-recently elected Republican Gov. Pat McCrory and GOP leaders in the state legislature. In case that wasn’t clear enough, the document elsewhere reiterated the goal was to “eviscerate the leadership and weaken their ability to govern.”

Dozens of other partisan combatants across the nation received more than $150 million combined from the people spending Henry’s money in 2021. Now with net assets just shy of $16 billion, the Ford Foundation has for decades been one of the most influential partisan-left donors in America. This pattern had grown so severe by 1977 that Henry Ford II, grandson of Henry Ford, loudly resigned from the foundation’s board, sniping on his way out that the well-heeled staffers had no appreciation for the capitalist system that left them so much loot to play with.

Like Blueprint NC, some of the other partisan players raking in Ford’s big bucks may occasionally endure prying from the political press. But the same cannot be said of the paymasters behind the scenes. The people spending the Ford money literally cannot buy bad press from the conventional Big Media.

Right-center journalist Ira Stoll compiled an embarrassing collection of recent boot-licking accounts from just the New York Times. In April 2020, months before Joe Biden was even the Democratic presidential nominee, Times columnist Thomas Friedman was pushing Ford Foundation president Darren Walker as a great choice for a Biden cabinet. This was preceded by a gushing July 2019 Times profile of Walker and was followed in September 2020 by yet another puffy interview. In September 2020 piece the hard-boiled newspaper went with a soft headline: “How Being a 13-Year-Old Busboy Prepared Darren Walker to Lead the Ford Foundation.”

Stoll concluded with the revelation that Ford grants pay the Times to report the news. One example was a $1.5 million grant from Ford to the Times that was announced in . . . December 2020. (Ahem . . . nothing to see here . . .)

Try to imagine similar profiles for a political donor with an eight-figure net worth who gives out $150 million each year to right-leaning groups such as Americans for Prosperity. If you’re not feeling terribly creative, then just conjure up some Darth Vader music and insert “Ford Foundation” as the subject into commentaries such as “Why Charles Koch Wins When Our Energy System Breaks Down” (New York Times, May 2021).

“Why the Ford Foundation Wins When Our Energy System Breaks Down” could even be a clumsy but somewhat on-point description for more than $3.5 million shelled out by Ford in 2021 to lefty climate alarmist organizations that hypocritically oppose our largest and most reliable source of zero-carbon energy: nuclear power. Noting the virtue and critical necessity of carbon-free nuclear in a 2018 report, the Nature Conservancy recommended a staggeringly ambitious goal of hiking the nuclear contribution to world energy output from 7.8 percent to 33 percent.

On October 18, 2021, the Ford Foundation raked in more criticism-free headlines with its announcement that it would be divesting from fossil fuel energy investments. The PBS NewsHour account said: “Going forward, the foundation says it will invest its energy portfolio in alternative and renewable energy, and funds that ‘address the threat of climate change, and support the transition to a green economy.’”

Expecting a carbon-free or even just low-carbon future to arise solely from weather-restricted power sources such as wind and solar is to expect the lights to go off and people to begin eyeing one another covetously as sources of protein. That is effectively the agenda of at least seven of the Ford Foundation’s 2021 grant recipients.

This report examines those recipients and dozens of other lefty advocacy groups cashing in on the more than $150 million the Ford Foundation handed out to them this year.

The $150 million figure is a low-ball conservative estimate. It doesn’t even include paying PBS or the Times. In the 1990s the Public Broadcasting Service solicited donors with the slogan: “We’re PBS. If we don’t do it, who will?”

Well, since PBS won’t do this, the Capital Research Center will.

The reports draw on grant information provided by the Ford Foundation website and profiles at InfluenceWatch.

In the next installment, the Ford Foundation has granted millions of dollars to environmental groups pushing for 100 percent decarbonization of the U.S. economy.