For Anti-Capitalists, “The Future Is Public” 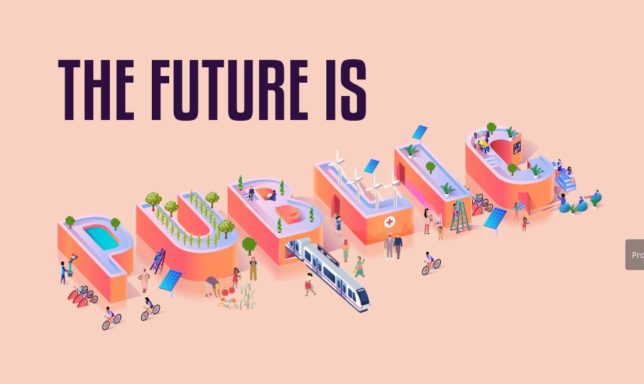 An extensive profile of the Institute for Policy Studies (IPS) recently became available on InfluenceWatch. Founded in 1963, IPS quickly developed a reputation as one of the furthest-left think tanks in the United States. In 1974, it established the Amsterdam-based Transnational Institute as its international spinoff.

Although the Transnational Institute has a global focus and became independent of IPS in 1992, it continues to receive support from American foundations and collaborate with American nonprofits on projects. Accordingly, exploring the nature of this work can illuminate the ideological priorities of certain U.S.-based groups and funders, as illustrated by The Future Is Public campaign.

The Future Is Socialist

The Future Is Public is an international campaign to oppose economic privatization and support extensive government-provided goods and services. In 2021, it released a 36-point “Global Manifesto for Public Services,” which has been signed by 214 groups (and counting) as of September 2022. Although the details are somewhat vague, the thrust of the manifesto is that the state—in furtherance of its proper “redistributive function”—should take control of large swaths of the economy, providing (at minimum) “education, energy, food, health and care services, housing, social security, telecommunications, transportation, waste collection and disposal, and water and sanitation” to everyone.

Numerous purported benefits of cordoning off these economic sectors from market forces are touted. The astronomical costs involved would (theoretically) be borne by “progressive taxation of capital, profit companies, wealth, assets, property and labour”—in other words, much of what creates or stores value in a society. The ultimate idea is to construct “a collective public system for redistribution,” which “can neither be left to the market nor subject to austerity.”

The manifesto thus proposes to implement a socialist economy, even if it does not explicitly use that term. It frames government-provided goods and services as fulfilling the ideal of everyone “contributing fairly according to their capacities and ability to pay, in order to meet everyone’s needs and fulfil their rights”—a modestly reworded rendition of Karl Marx’s well-known maxim “from each according to his abilities, to each according to his needs.” Faith in the accountability of government officials and in their capacity for prudent long-term planning is professed repeatedly throughout the manifesto.

Supporters and Their Funders

The 200+ organizational signatories of The Future Is Public manifesto may therefore be understood to have lent their support to at least some form of socialist economic system. Most are foreign groups, but a number of notable ones are either based in the United States or funded by American foundations. The Transnational Institute appears to be one of the primary groups behind the campaign—it runs the website that hosts the manifesto and helped publish a related book in 2020.

Most of the Transnational Institute’s funding comes from various governments, with the Netherlands accounting for 41 percent of its 2021 revenue. American philanthropy also contributes a significant share. The Rockefeller Brothers Fund has given it over $1 million since 2017 for its work on trade and investment. The various entities that comprise George Soros’s Open Society Network have provided the Transnational Institute with almost $2.4 million since 2016 for a variety of purposes, including one $244,000 grant in 2020 for promoting “narrative change for the realisation of universal public services and public economies as the foundations of just and resilient societies.”

A number of U.S.-based nonprofits signed The Future Is Public manifesto, including Food and Water Watch, the Center for Economic and Social Rights, the Global Initiative for Economic, Social and Cultural Rights, and others. As of September 2022, IPS is not among them. One American signatory that has been involved in multiple aspects of the campaign is the Democracy Collaborative, which seeks to replace “today’s corporate capitalist system” with some form of socialist economic structure. It was co-founded in 2000 by Gar Alperovtiz, who was himself a founding IPS fellow and had been involved in some of the earliest discussions about establishing the think tank back in the early 1960s.

The Democracy Collaborative operates as a 501(c)(3) nonprofit with 2019 revenues of just under $5.5 million. Its funders include numerous foundations which owe their vast endowments to the prosperity generated by the “corporate capitalist system,” including the NoVo Foundation, the Open Society Foundations, the Kresge Foundation, the Surdna Foundation, the Kendeda Fund, the W.K. Kellogg Foundation, the Annie E. Casey Foundation, and more.

It is impossible to predict what, if anything, might one day come of The Future Is Public campaign. It is, however, always important to pay attention to where activist groups are staking out positions on issues—even if they seem unrealistic—if only to understand just how radical some of them really are.

The fact that key participants in The Future Is Public campaign, such as the Transnational Institute and the Democracy Collaborative, are being funded by some of the most prominent foundations in the United States could also be taken as further evidence of a trend against free-market capitalism that is underway within American philanthropy, something that has been remarked upon by the Wall Street Journal and others.

Larry Kramer, president of the $13.6 billion Hewlett Foundation (which according to its website has not funded either the Transnational Institute or the Democracy Collaborative, and has no apparent connection to The Future Is Public) has declared that “neoliberalism’s anti-government, free-market fundamentalism is simply not suited for today’s economy and society, but what comes next is still not fully developed.”

Although convinced that the free market “causes more problems than it solves,” Hewlett and its grantees are evidently still in the process of “determining the successor to neoliberalism.” Some of its philanthropic peers, however, are funding groups that—if their support for campaigns like The Future Is Public is indicative—appear to have already identified their preferred successor to capitalism: socialism.