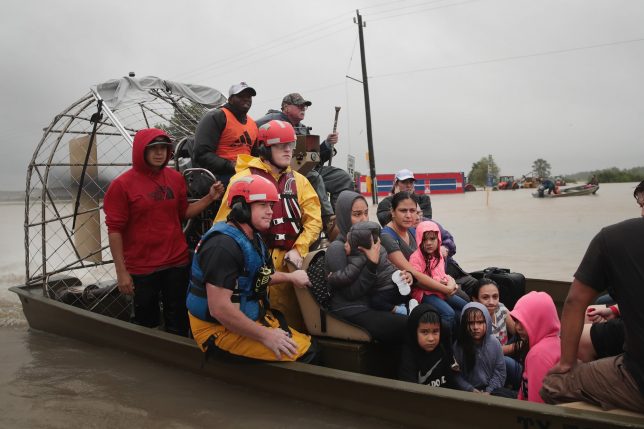 Hurricane Harvey left an unprecedented trail of devastation in its wake, rendering thousands in Houston, Texas without shelter or aid. But in the midst of historic tragedy the country rallied to help residents in their time of need as Americans of every stripe came together for the common good.

Capital Research Center has collected some of our favorite examples of Americans doing good in Houston.

“A Slumber Party on Steroids”

As Houston began to flood, Jim “Mattress Mack” McIngvale, the owner of Gallery Furniture, posted a simple message on social media: “If you can safely join us, we invite you for shelter and food.”

McIngvale opened two of his stores to hundreds of displaced Texans, offering shelter and a bevy of mattresses, recliners, love seats and sleeper sofas for the beleaguered evacuees. He even dispatched delivery trucks to people who couldn’t make it across the city’s flooded streets, bringing them to his stores and safety. “The city and the local authorities did a great job,” McIngvale later told NPR, “they just couldn’t get to all the 911 calls.” That’s where McIngvale came in. By the time the waters began to recede, Gallery Furniture was sheltering some 400 people and offering them three meals a day. 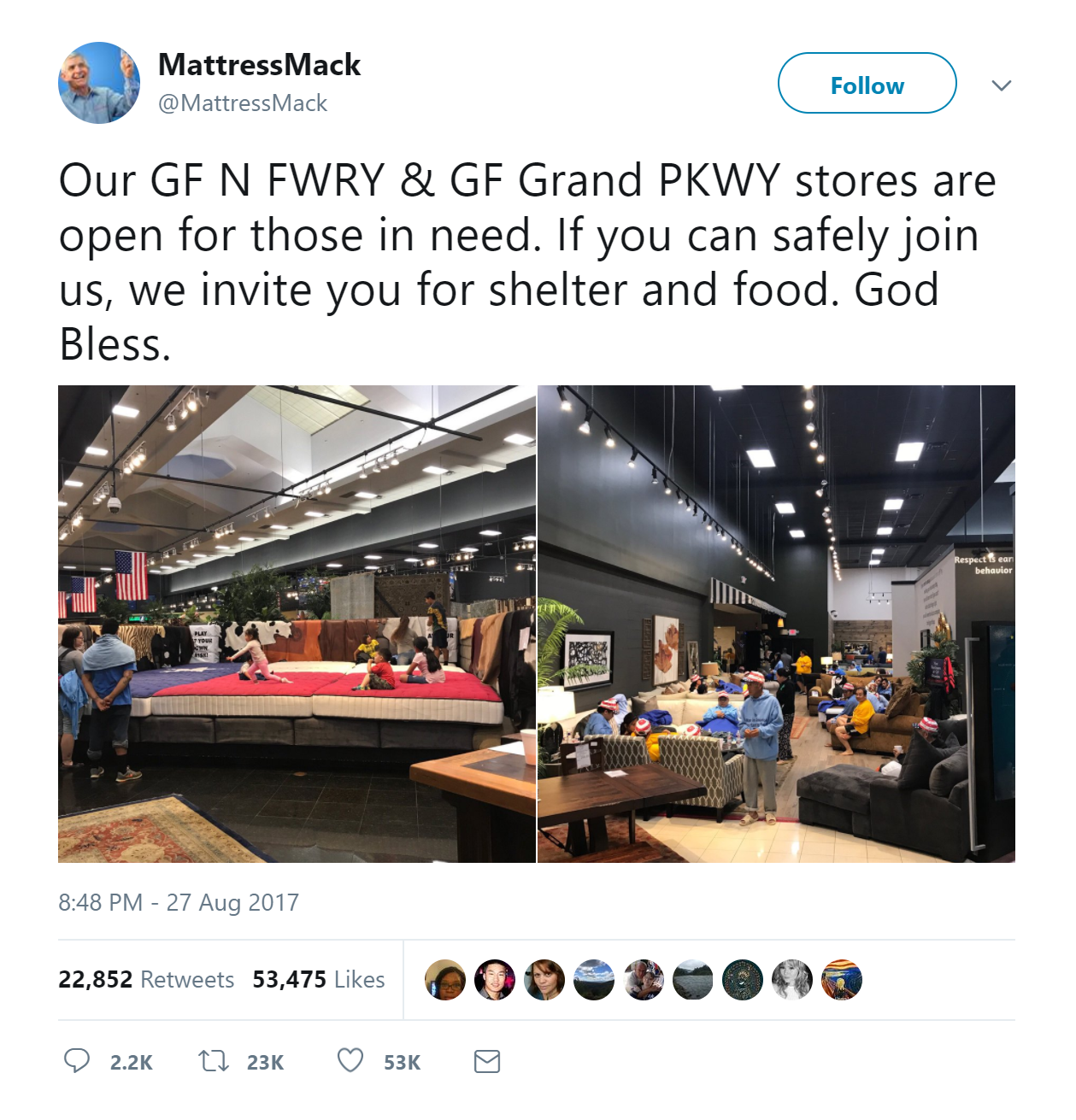 This wasn’t the first time he’s done this, either; Gallery Furniture opened its doors twelve years ago to 200 victims of Hurricane Katrina. In fact, McIngvale purposely made his stores flood-proof by building them on elevated concrete. Keeping people fed and dry wasn’t cheap, however; McIngvale estimated it cost his company $30,000-$40,000 to keep the stores open, but it didn’t phase him. “We can afford that,” he said, “and what we can’t afford is to cause these people to lose hope, we [have] got to give them hope. This is what my parents would have done.”

Roberta Lee, a Houstonian who sheltered in one of the stores, offered her own words of thanks.

For him to open his door and [say] if you’re affected by the flood, come in. And I mean you had people wet, you had people dirty, who does that? You have to see it to believe it, it’s real. I mean he has a heart of gold.

As the floodwaters rose and trapped thousands of residents in their homes, emergency responders quickly ran into a problem: navigating the new “Gulf of Houston.” Even with National Guard elements deployed, there weren’t enough boats to go around. Worse, many residents were stuck in places where the water was too deep for ambulances to reach them. With thousands of calls for help piling up, things looked grim. That’s when the Houston boat brigade came to the rescue.

Mark Yost, a local paramedic, writes about his own experience with one boat owner in the Wall Street Journal. Responding to a 911 call for a woman who had fainted in her apartment in an area unreachable by ambulance, Yost and another paramedic hitched a ride in a volunteer’s 12-foot flat-bottomed boat. Making their way past the tops of submerged cars they passed by folks crowding roofs and balconies, waiting for someone to rescue them. When they finally found the woman and brought her back to the Shell gas station-turned-shelter, another man in an over-sized pickup gave a lift to the paramedics and their patient so they could make their way to a nearby hospital.

“It would be impossible to reach many of these patients without the help of the private flotilla, with boats ranging from inflatable kayaks to large pontoons,” Yost added, but their generosity doesn’t end there. “Strangers have dropped off food at our police, fire, and ambulance stations, and those restaurants that are dry and open are feeding us [for] free.” Considering that many Houstonians are “routinely ridiculed by the media and politicians” for supporting President Trump, Yost adds, their willingness to roll up their sleeves and get to work is admirable.

“If nothing else in this polarized age,” he says, “that should reaffirm your belief in the goodness of your fellow Americans.”

Feeding Houston, One Quarter at a Time

Houstonians aren’t the only ones pitching in, either. 1,500 miles away in East Aurora, New York, two young cousins are hard at work raising money to feed the families displaced by Hurricane Harvey with a lemonade stand. The boys, Dominic and Evan, promise to donate all proceeds for the 25-cent lemonade to the Houston Food Bank. 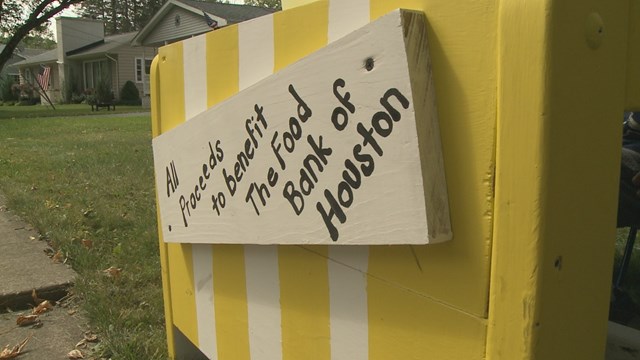 You can always count on Walmart to step up when Mother Nature strikes. As Hurricane Harvey loomed, local Walmart stores rushed to deliver over 1,060 truckloads of basic supplies such as infant formula, diapers, underwear and personal hygiene products. The massive vehicles dropped off more than 930 truckloads of water to impacted areas, and provided essentials to victims of the storm: first aid kits, flashlights and batteries, candles, rainwear, pet food, gas cans, and more. All in all, the donations totaled $10 million, including funds for the Salvation Army, Feeding America, the Greater Houston Community Foundation, and other charities. Walmart and the Walmart Foundation have also pledged $2 million to support the Hurricane Harvey Relief Fund.

Doug McMillon, Walmart’s president and CEO, offered his support to the city:

We are on the ground to help our friends and neighbors in the Gulf region, and we’ll continue to be in the tough days, weeks, and months ahead.

The mega-retailer even paid for 2,000 kayaks from K.L. Outdoor, a supplier in Michigan, to help emergency responders reach survivors.

This isn’t the first experience Americans have had with recent natural disasters, of course. The 2005 Hurricane Katrina left thousands of people in New Orleans, Louisiana without food and shelter, and the federal government’s response to the crisis was widely considered to be insufficient. Not for the first time, America’s philanthropic streak saved countless lives. CRC president Scott Walter and Sandra Swirski of Urban Swirski & Associates later wrote about the storm:

Looking back at Katrina, Americans find much to criticize in the response of government. While the Federal Emergency Management Agency struggled to function, corporations like Wal-Mart, FedEx, and Home Depot performed miraculous feats; charities like the Red Cross, Salvation Army, and Southern Baptist Disaster Relief surged supplies and staff; and funders like the Baton Rouge Area Foundation, the Greater New Orleans Foundation, and the Foundation for the Mid-South quickly established relief funds.

Hurricane Katrina prompted the Red Cross to launch its largest disaster response to date, and in the months following the disaster the charity served more than 68 million meals and provided more than 3.8 million overnight stays in shelters spanning 31 states.

In spring 2011 one of the worst tornadoes in American history struck Tuscaloosa, Alabama. Winds of up to 190 miles per hour swept through the city, leaving $2.4 billion in damages, 1,500 people injured, and 64 dead. Local churches organized small volunteer armies to rescue survivors and distribute food and water, even offering dog food and child car seats for free. In the spirit of giving back, four local radio stations owned by the broadcasting giant Clear Channel transformed their usual lineup of talk radio and music into what David Beito, a history professor at the University of Alabama, called “a relief clearinghouse.” As Beito recounts,

Typically, “someone call[ed] in to express a need for a particular area or group. Fifteen minutes later, the same listener relate[d] that 10 people showed up and offered their services.”

The local market manager for the company, Gigi South, made the decision to turn the stations into a temporary not-for-profit enterprise, but Clear Channel’s top brass supported this local initiative and “provided generators and engineers to keep the stations on round the clock.”

The stations may have been small (12 employees), but they worked ’round the clock in 10-hour shifts to help Tuscaloosans in need.

Although Tuscaloosa Clear Channel normally caters to a white, conservative audience, grateful listeners often make tearful calls from predominantly black and Hispanic neighborhoods like Alberta that bore the brunt of the tornado. No other radio or television stations in the community, public or private, have come close to matching this effort.

Statists on the Left may continue to jaw about the superiority of government services. But when disaster strikes, it’s old-fashioned American generosity that people really count on.