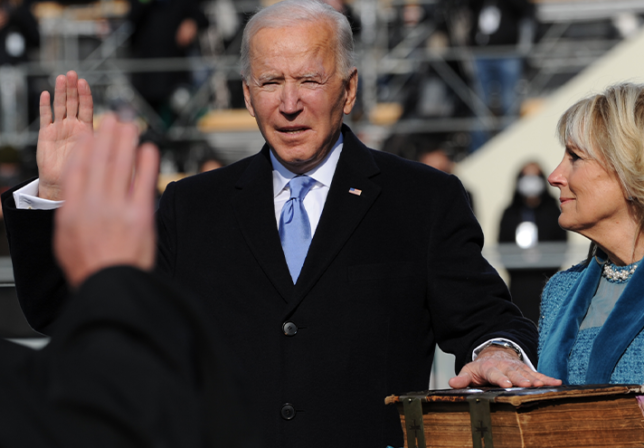 Since day one of his presidency, President Joe Biden has done the bidding of the organized labor unions that supported his candidacy and stand to gain from his policies. Among the perks Big Labor got? Senior officials in the Biden administration, most prominently ex-Laborers’ Union local president Marty Walsh as Department of Labor secretary.

But placing a bunch of organized labor alumni into senior government posts caused the Biden team a problem: The administration’s ethics guidelines would prevent some of them from interfacing with the unions for which they used to work. So, as Axios reported, the administration waived the guidelines for prominent union-alum staffers such as White House “Made In America” office head Celeste Drake, late of the AFL-CIO and Directors Guild of America, and OPM Director of Intergovernmental Affairs Alethea Predeoux, late of the American Federation of Government Employees.

The cheap shot is to play “What if Trump did it?” Whenever the Trump administration did not follow to the letter any ethics statements, liberal “watchdogs” such as Citizens for Responsibility and Ethics in Washington denounced the moves in hyperbolic terms up to and including claims of high treason. But there is a substantive warning in the Biden administration’s special favors to its allies in Big Labor, namely that the new government intends to operate to strengthen Big Labor’s coercive power.

The Biden administration’s labor agenda is laid out in the Protecting the Right to Organize Act, which passed the House of Representatives earlier this year and sits before the Senate. At stake are billions in new forced union dues, with unions potentially able to nearly double the size of their combined political and lobbying war chests from $1.6 billion per two-year election cycle to $3 billion per cycle, according to a report by the Institute for the American Worker.

And given that union political and advocacy support break down somewhere between 87% and 99% for Democrats and the Left, depending on whether one counts explicit political donations or analyzes Big Labor’s support for other advocacy groups, it is easy to see why the Biden administration and its allies up and down the left-progressive movement would endorse legislation to force millions of workers into unions they have expressed no desire to join.

The close alliance between Big Labor and the Democratic Party goes beyond their broad alignment on expanded social welfare and harsh regulations on private enterprise (some might call it “socialism”). American labor unions practice something called “social justice unionism,” aligning with full-spectrum liberalism to an even greater degree than that normally indicated by coalition politics, rather than focusing advocacy on members’ economic status or even broader social-democratic welfare-state policy. This is why you have situations in which government worker unions fund Planned Parenthood’s advocacy arms and private-sector unions fund liberal and pro-abortion-rights judicial advocacy groups such as the American Constitution Society.

The “social justice unionism” linkages are further demonstrated by the alumni networks of ex-union officials. Patrick Gaspard, a diplomat in Democratic administrations, is both the former head of George Soros’ Open Society Foundations and an alumnus of 1199SEIU, the most powerful labor union in the state of New York. Cecile Richards and Vicki Saporta, both longtime heads of abortion advocacy groups, both got their starts in Big Labor with the SEIU and Teamsters Union, respectively.

The interconnectedness among the Democratic Party, the “woke” social-justice left, and Big Labor explains both the radicalism of the PRO Act and the petty corruption of the Biden administration’s ethics waivers. The administration wishes to serve a special interest that not only helped elect it but also funds and supplies the foot soldiers for the ideology that it hopes to lock into the federal government and national culture.

This article originally appeared in the Washington Examiner on May 14, 2021.