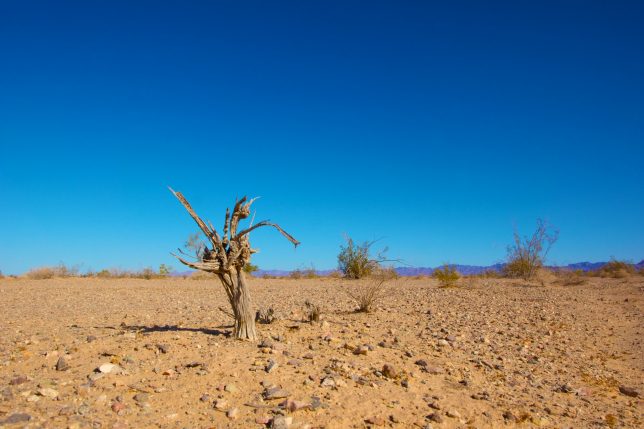 Ancient Africans pulled 300-pound fish from the waters of the Sahara. Crop failures caused by climate change in 16th Century Europe led to the burning of the witches deemed responsible. In the 17th and 18th Centuries, Londoners held “frost fairs” at which they danced on the frozen surface of the Thames; then the Thames stopped freezing.

The climate changes, as it always has. Over the course of civilization, climate change has inspired irrational fear and, sometimes literally, witch hunts.

For true believers in Global Warming theory, it is an article of faith that Earth’s climate was stable for thousands of years until modern society, with its factories and coal-fired power plants and SUVs, ruined everything. Climate change, the environmentalists say, is something created by industrial machines and mechanical transportation and the generation of electricity.

For years, a Google search for “average Earth temperature” would bring up a fact-in-a-box (“featured snippet,” the Google folks call it) noting that, “Since the dawn of agriculture 11,000 years ago, civilization has enjoyed a relatively stable climate.” 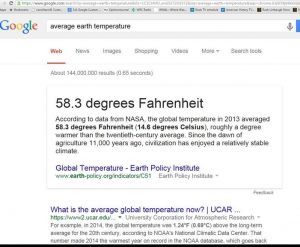 “Relatively stable climate”? Here are some events of the past 11,000 years:

Over a 5,000-year period, the Sahara dried out. There were lakeside hunting and fishing settlements in what’s now the Ténéré desert. By a thousand years ago, the Sahara’s Lake Mega-Chad, once the largest freshwater lake in the world, was mostly gone. Over millennia, Saharan dust fertilized South America, creating the great rainforest.

The Ubaid Empire controlled Mesopotamia (roughly, Iraq) until a drought around 3900 B.C. forced mass migration to the Nile Valley – leading to the first great Western civilization, in Egypt.

The Saqqaq people came to Greenland around 2500 B.C., then disappeared due to cooling around 850 B.C. The Dorset people, Paleo-Eskimos from the Canadian Arctic, came to Greenland around A.D. 1, and apparently left when the climate warmed. The Vikings arrived in Greenland in approximately A.D. 980. Around that time, northern sea ice melted, allowing the Vikings to create an empire that included a colony in North America. Russia was named after the Vikings (Ruotsi was the Finnish name for Sweden). Vikings conquered most of England, then lost the country to French descendants of Vikings, the Normans, that is, Norsemen.

The climate changed and Greenland was cut off, and by the 15th Century, the Greenland colony had vanished. As sea ice returned, forests retreated, creating a shortage of the wood that was needed to build ships. So much for the Viking empire.

Between A.D. 760 and the early years of the 11th Century, a series of multi-year droughts collapsed the Mayan civilization in Mexico.

There were vineyards in northern England, and cereal grains were harvested on European farms more than 1,000 feet above sea level. Then, by the 1300s, English vineyard disappeared, while fish replaced cereal grains as the major food source in Iceland.

Rat populations soared in central Asia when it got warm. When it got cold, rat populations plummeted and fleas hitched a ride on camels and humans to Europe. During a period beginning in the 1340s, at least a third of the population died from flea-borne plague known as the Black Death.

By the 17th Century, advancing glaciers caused floods and crushed villages in the Alps, and famine forced some 100,000 Scots to flee to Ireland.

In 1775, drifting sand dunes destroyed villages in Denmark. In 1780, for the first time in recorded history, New York Harbor froze over.

In the early to mid-1800s, things warmed up. By the end of the 19th Century, though, scientists were warning of global cooling.

By the 1930s, scientists noted the rapid rise in temperatures in the Western world and talked of the threat of global warming. In Syria, afflicted by drought and severe cold, the authorities blamed and banned the yoyo.

Temperatures rose into the 1940s, then levelled off. The September 1958 issue of Harper’s magazine featured “The Coming Ice Age: A true scientific detective story,” an article on the threat of global cooling, written by future feminist icon Betty Friedan.

Then temperatures started to rise again. In a September 17, 1969 memo, Nixon aide and future U.S. senator Daniel Patrick Moynihan warned: “It is now pretty clearly agreed that the C02 content will rise 25% by 2000. This could increase the average temperature near the Earth’s surface by 7 degrees Fahrenheit. This in turn could raise the level of the sea by 10 feet. Goodbye New York. Goodbye Washington, for that matter.”

***NOTE: It appears that Google has changed the fact-box (after I ridiculed them for it). I worded the 4th paragraph to take this into account. Attached in the screen-capture that I did of the Google result for “average Earth temperature,” in case you want to use it.***