Empowered Labor: Curtailing the Excesses of the NLRA 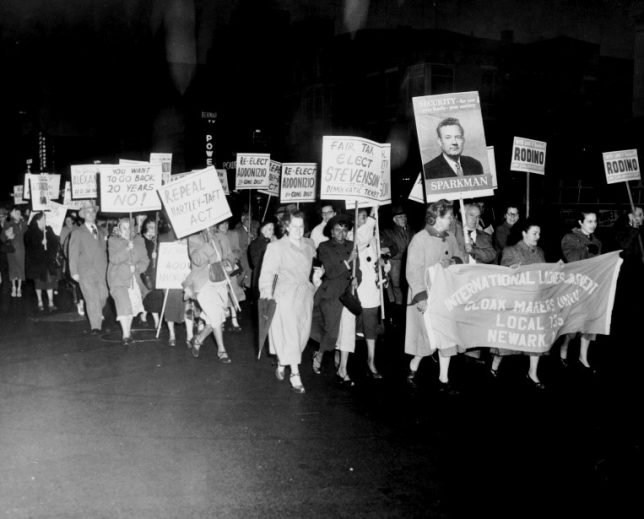 The Wagner Act’s passage led to an initial surge in union organizing. Unionization in the labor force peaked shortly after the end of the Second World War; since that time it has declined substantially in the private sector. Labor union militancy also spiked: The number of strikes rose through 1937 and surged again after the 1937-38 recession, reaching an all-time high in 1943.

Passage of the Wagner Act also upgraded and deepened the long-standing alliance between the labor unions and the Democratic Party. The old American Federation of Labor split in two, with John L. Lewis’s United Mine Workers of America leading a new coalition calling itself the Congress of Industrial Organizations (CIO). The CIO formed a committee (deceptively named the “Non-Partisan League”) to support President Roosevelt and his allies, who would keep the privileges unions won from the NLRA and appoint pro-union members to the NLRB. In the 1936 elections, the CIO and its member unions spent eight times what the AFL had spent on all national election campaigns from 1906 through 1928 combined.

Because the original NLRA was so favorable to labor unions and unfair to employers and workers not wishing to be unionized or support union political and policy causes, it was substantially amended at the first opportunity that free-market conservatives had to fix it—the 80th Congress in 1947. The fact that the CIO’s “Non-Partisan League” was a close ally of New Dealer President Harry Truman and his allies probably also helped Congressional conservatives prioritize labor law reform.

That year, the Labor Management Relations Act—better known as “Taft-Hartley” after its sponsors U.S. Sen. Robert Taft (R-Ohio) and U.S. Rep. Fred Hartley (R-N.J.)—was enacted to restore balance between labor unions, employers, and individual employees while combating union abuses that expanded after the passage of the Wagner Act. Taft-Hartley removed certain labor union privileges, codified rules for collective bargaining under the NLRA, prohibited union picketing against businesses not directly party to a labor dispute (known as secondary boycotts), and expanded the NLRB’s jurisdiction over unfair labor practices by employers to unfair labor practices by labor unions. Taft-Hartley also instituted a state option to allow employees who dissent from union activities but are forced to submit to union representation not to pay for union activities (known as right-to-work)—as of May 2018, 28 states have exercised that option.

In the late 1950s, the NLRA was amended again after bipartisan Congressional investigations uncovered substantial criminal corruption of labor unions. The mafia influence over unions of the time was immortalized in the classic 1954 Academy Award-winning Marlon Brando film On the Waterfront, and Robert F. Kennedy kicked off his political career as the chief counsel of the U.S. Senate Select Committee on Improper Activities in Labor and Management (called the McClellan Committee after its chairman, Arkansas Democrat John McClellan).

The McClellan Committee investigation culminated in the development of the Labor Management Reporting and Disclosure Act of 1959—known as the Landrum-Griffin Act after its sponsors, U.S. Reps. Phillip Landrum (D-Georgia) and Robert Griffin (R-Michigan). An Eisenhower administration-backed alternative to a weaker set of proposed financial disclosure rules proposed by then-Sens. John F. Kennedy (D-Massachusetts) and Sam Ervin (D-N.C.), the Landrum-Griffin Act established a series of extensive disclosures that labor unions must file on their expenditures and instituted a bill of rights for union members, which included protections of members’ right to speak out on union matters without interference, to run for local union offices in secret ballot elections, and to a fair internal union discipline process.

The disclosures established under Landrum-Griffin require that labor unions must file for public review extensive accountings of their officer and staff salaries at all levels; membership and dues and fees rates; balance sheet information; and outside expenditures, classified by whether the purposes are representational, political or lobbying, contributions and gifts, administration, or overhead. These federally mandated annual reports—known as “LM-2s” after the name of the most extensive type of form filed by the largest unions—are available to the public (and therefore, to union members) through the U.S. Department of Labor Office of Labor-Management Standards. In recent years, the government has made the reports available online.

In the final installment of Empowered Labor, learn how pro-labor Democrats hope to roll back the protections for individual workers and businesses created by Taft-Hartley Act.