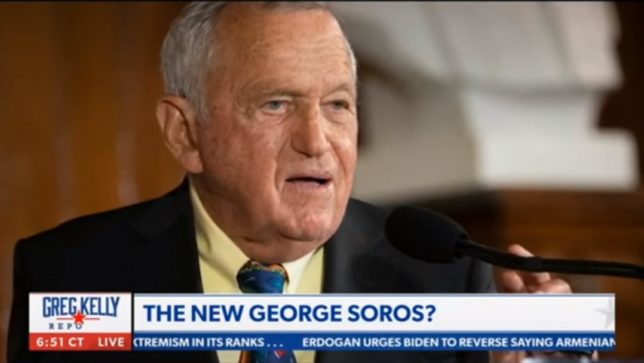 If you’ve never heard the name Hansjörg Wyss (pronounced “Veese”), it’s time to meet one of the Left’s most influential—and least visible—mega-donors.

This Swiss billionaire made the news last month when New York Times reporter Ken Vogel exposed him as “a leading source of difficult-to-trace money to groups associated with Democrats” using a “daisy chain of opaque organizations” to mask the hundreds of millions of dollars Wyss has poured into left-wing politics.

He has been called the “new George Soros” for funding a host of environmentalist groups, though Wyss has a fraction of the notoriety of that Hungarian-born billionaire. But unlike Soros, Wyss is not a citizen or permanent resident of the U.S., making him perhaps the most powerful foreign individual meddling in American elections with almost no criticism from liberals.

We’ve revealed how the Wyss Foundation funneled millions into the multi-billion-dollar “dark money” network run by Arabella Advisors for its “Hub Project,” a center for shaping the Left’s digital and messaging strategy in order to give Democrats an edge in the 2018 and 2020 elections. We also pulled back the veil to expose Wyss’s funding of the National Redistricting Action Fund, Eric Holder’s campaign to gerrymander America’s congressional districts to favor Democrats.

That reporting grabbed the attention of watchdog groups including Americans for Public Trust (APT), which recently filed a complaint with the Federal Election Commission (FEC) alleging campaign finance violations by Wyss, the Wyss Foundation, and its associated advocacy arm the Berger Action Fund, as well as Arabella’s New Venture Fund and Sixteen Thirty Fund.

Arabella Advisors is a for-profit consulting firm founded by former Clinton administration staffer Eric Kessler, who started his career as an environmental activist for the League of Conservation Voters. The firm controls four nonprofits (the “sisters”) with vague names and a common address: the 501(c)(3) New Venture Fund, Hopewell Fund, and Windward Fund and the Sixteen Thirty Fund, Arabella’s 501(c)(4) lobbying shop. Each of these nonprofits pays the company for the privilege of being staffed and led by Arabella folks ($137 million since 2008). All four are behemoths—bringing in $731 million from difficult-to-trace donors in 2019 alone.

Federal law draws sharp lines between the limited lobbying allowed by 501(c)(3) nonprofits and the more expansive lobbying allowed (c)(4) nonprofits, as well as between the independent expenditures (c)(4) groups are allowed and the electoral activities of a political action committee (PAC). Nonprofits, with some limited exceptions, aren’t intended to be vehicles for getting candidates elected to public office; PACs are.

The evidence that Wyss and Arabella crossed those legal lines is damning. According to APT, “Mr. Wyss indirectly funded federal electoral advocacy through his nonprofit organizations,” failing to set them up as political action committees (PACs), and “the intended recipient of these funds was ultimately a variety of organizations whose primary purpose is to engage in electoral advocacy.”

Wyss established the Hub Project, a front for the “dark money” funder New Venture Fund and the recipient of significant funding from the Wyss Foundation, in order “to avoid any connection with the sizeable election activities carried out by the Hub Project and Change Now,” a super PAC associated with the Hub Project.

“Operating since 2015 without the requisite FEC filing,” APT writes, “the Hub Project has been immune to any oversight and accountability despite significant spending in federal election.” It adds:

The Hub Project has served as a vehicle for the political spending of Mr. Wyss. This is demonstrated by the fact that Mr. Wyss has not publicly disclosed his role in founding the Hub Project. Neither his influence nor his financial support can be found anywhere on the group’s website. Rather, information regarding his involvement with the Hub Project was the result of “interviews with five people with knowledge of The Hub Project, an internal memo from another liberal group that was obtained by The New York Times.”

Interestingly, Wyss was caught in 2016 making roughly $41,000 in illegal campaign contributions to multiple Democrats from 1998 to 2003 (non-citizens are barred from funding campaigns).

So far as this writer can tell, Wyss never paid a penalty for his illegal donations—a powerful example of lefty billionaire privilege.

For more on Hansjörg Wyss and his funding of the Left, see our report “Inside the Foreign-Funded ‘Hub Project’ to Transform America.”