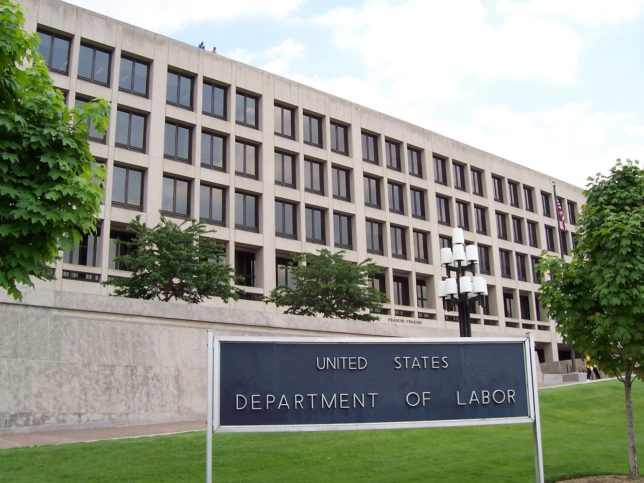 The year was 1959. For the two years previous, corruption in national labor unions—especially Jimmy Hoffa’s International Brotherhood of Teamsters—was the talk of Washington, as a bipartisan Senate committee aided by future Attorney General Robert F. Kennedy probed deep into union bosses’ personal enrichment deals, labor-management kickback schemes, and the connections between Hoffa and the Mafia. Something had to be done to protect union members’ dues payments, their pension and welfare funds, and the integrity of their contracts. So a bipartisan Congress passed and President Dwight Eisenhower signed the Landrum-Griffin Labor Management Reporting and Disclosure Act (LMRDA) to establish financial reporting requirements for labor unions, make union financial reports subject to public review, expand the Taft-Hartley Act’s prohibition on secondary strikes to prohibit “hot cargo” contract provisions, and regulate internal union governance.

Today, the U.S. Department of Labor is honoring two of the men who brought about this important reform legislation sixty years ago this month: One of the law’s namesakes, U.S. Senator (in 1959, U.S. Representative) Robert P. Griffin (R-MI), and Howard Jenkins, Jr., who as a staffer in 1959, helped draft the legislation in the DOL’s Office of the Solicitor. (Jenkins later served as a member of the National Labor Relations Board.)

Landrum-Griffin contains a number of important provisions that provide transparency in union operations and protect union members from abuses like those inflicted on midcentury Teamsters by Hoffa and his cronies. The law gave union members a “bill of rights” guaranteeing minimum standards of member involvement in union governance. The law further regulated the conditions under which a national union could place a subordinate union into “trusteeship,” thus taking over its governance—a practice routinely abused by mobbed-up or otherwise corrupt Teamsters bosses to suppress internal dissent. Landrum-Griffin directed that union officers use union funds “solely for the benefit of the organization and its members,” and barred employers from providing kickbacks to union officials (another avenue that corrupt Teamsters used to enrich themselves).

Landrum-Griffin also closed loopholes in the Taft-Hartley Act that allowed unions to continue coercive actions against businesses not directly involved in labor disputes. Under so-called “hot cargo” provisions—a favorite tactic of Hoffa’s Teamsters—the union forced employers to agree not to transport goods to or from a shop involved in a labor dispute; Landrum-Griffin closed this exception to prohibitions on “secondary boycotts.” Other coercive union tactics, such as picketing, were constrained to limit opportunities for corruption.

But one of Landrum-Griffin’s most important effects did not materialize until the George W. Bush administration. While the law required unions to file annual reports outlining their expenditures, it took regulations promulgated in the early 2000s to make these reports more useful to union members and the public seeking information on union’s activities. The rules required large unions to detail and itemize expenditures over $5,000 and report all vendors that received over $5,000 in union funds in any given year on the “LM-2” annual financial reports; these reports are credited with helping expose corruption by a former leader of the Service Employees International Union in California.

Sixty years on, the government and public’s success in combating the worst examples of union racketeering is at risk. With fewer individuals in unions (the rate of unionization in the private sector has shrunk to 6.4 percent even as public sector union remains at 35.3 percent), the lack of public attention on these issues has bred complacency. At the same time, progressives (and machine-hack pols funded by labor union-aligned interests) are hard at work to demolish the structures—like the Landrum-Griffin Act—that have won these victories. To choose just one example, the Protecting the Right to Organize Act, a Democratic Leadership-backed bill that would be the largest expansion of union power since 1935, would repeal the prohibition on strikes to coerce employers to stop doing business with other businesses.

For more on the history and provisions of the Labor-Management Reporting and Disclosure Act, see our new expanded profile on the law at InfluenceWatch.org.