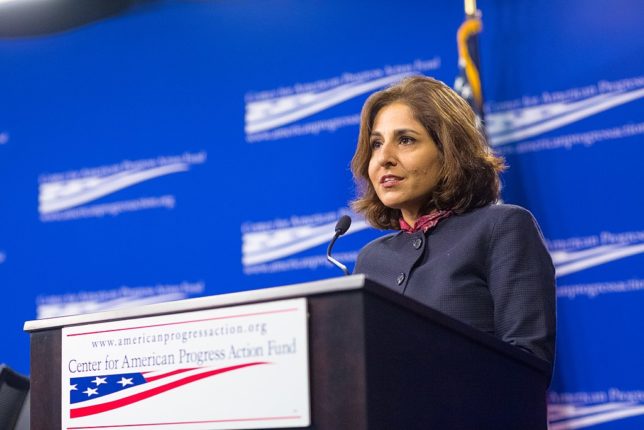 With Joseph Biden’s inauguration as the 46th president of the United States, the Senate will soon be considering his nominations for various positions in the government. One particularly contentious nomination is Neera Tanden as director of the Office of Management and Budget (OMB).

On November 29, 2020, Wall Street Journal reported that Biden was planning to nominate Neera Tanden, president of Center for American Progress (CAP) and lifelong Clinton aide, along with several other establishment liberals, to key economic positions. This came out only a few days after he announced his intentions to make former chair of the Federal Reserve and Democratic favorite Janet Yellen his treasury secretary.

After this story was confirmed and Tanden had been officially chosen to run OMB, two Washington Post reporters published a long piece excoriating Biden’s choice and Tanden herself. “In her nine years helming Washington’s leading liberal think tank,” they wrote, “Neera Tanden mingled with deep-pocketed donors who made their fortunes on Wall Street, in Silicon Valley and in other powerful sectors of corporate America.” Such donors include Bain Capital, Mark Zuckerberg, CareFirst BlueCross BlueShield, Northrop Grumman, and Walmart.

Why were these reporters so critical of Biden’s decision to give a lifelong Democrat a powerful position?

Office of Management and Budget

As OMB director, Tanden would be responsible for executing the federal budget: She will have power over the spending plans and programs of the federal agencies; corporate tax policies; regulations on corporations; stimulus checks and bailouts for corporations and banks. And she will have the power to reject new government programs proposed by the more progressive members of Congress.

These things will affect the entire economy. The OMB is the largest office in the White House. Putting the corporate-friendly president of the headquarters of establishment liberalism in charge of the budget is no small gesture on Biden’s part. After all, her duties will include setting the standards that will affect the corporations run by her friends, people she does not want to alienate.

Other areas of their critique highlighted the implications Tanden would have for U.S. foreign policy, seeing as CAP did not support a congressional effort to end the Yemeni Civil War. The reporters connected the CAP’s lack of support to the fact that the United Arab Emirates, an active participant allied with Saudi Arabia in the war, had previously given CAP up to $3 million.

What exactly does Biden’s decision communicate?

For one, it conveys Biden’s full ideological alignment with the establishment Democrats and a dismissal of any reconciliation with the democratic socialists.

The negative relationship between the Bernie movement and CAP has a long history. Tanden is well-known for getting herself and her RussiaGater troll army into Twitter battles with the Bernie wing of the Democratic Party, particularly on topics like Medicare for All and foreign policy. Tanden has not shied away from low blows either, having on different occasions castigated his followers as misogynistic “Bernie Bros” and pawns of the Russian government.

During the 2020 Democratic primaries, ThinkProgress, a CAP website, wrote so many hit pieces on Sanders that the Sanders campaign felt the need to scold CAP in an angry letter. Signed by Bernie himself, the letter directly called out Tanden, writing, “[she] repeatedly calls for unity while simultaneously maligning my staff and supporters and belittling progressive ideas.” He went on to cite CAP’s acceptance of “corporate money” as the reason for its “personal attacks” against other left-wing progressive candidates that had, for example, challenged the pharmaceutical industry.

At the time, Sanders had two former ThinkProgress staffers on his team: Faiz Shakir, Sanders’s campaign manager, had founded the site, and Matt Duss, his Senate foreign policy chief, had previously worked and written for it. Duss had fought with CAP in the past, accusing CAP under Tanden for interfering with what the blog could and couldn’t say, specifically highlighting their suppression of viewpoints on foreign policy that were further to the left.

As some have noted, by making Tanden the head of the OMB, Biden would put Sanders to in a subordinate position to her, as he is now the chair of the Senate Budget Committee. Celebrations for obtaining  his long-coveted seat will be dampened knowing Sanders’s “single biggest, most aggressive” critic, according to his former senior adviser David Sirota, will thwart his socialist goals.

As journalist Matt Taibbi put it, “The appointment of a longtime anti-Sanders troll to the Biden government is an impressively petty end zone dance by Democrats celebrating the crushing of their left flank”—especially to a position that gives her more influence over the budget.

Bernie aides, staffers, and affiliates were infuriated by the news. Briahna Joy Gray, Sanders’s former national press secretary, said she doesn’t “know anyone personally in Bernie world who is happy about this choice.” “It’s like putting Chelsea Clinton in the office,” Sanders’ former political strategist Kurt Ehrenburg quipped. Paco Fabián, the campaigns director of a Sanders PAC Our Revolution, criticized the choice as divisive and characterized Tanden as someone “who punch[es] left, instead of focusing on the real adversary here, which is the Republican Party and money in politics.”

Republicans also have reason to object: Sen. John Cornyn cited “her combative and insulting” tweets about many Republican senators over years as one possible reason her confirmation might go south. Cornyn’s communicators director told USA Today that she “stands zero chance” of getting confirmed because of her “endless stream of disparaging comments about the Republican Senators whose vote she’ll need.” Tanden has prepared for her confirmation by deleting over 1,000 tweets disparaging Republican and Democratic senators, such as posts calling Sen. Mitch McConnell “Moscow Mitch.”

On a concrete, policy level, her appointment portends a Clintonite administration. Tanden has floated entitlement cuts in the past. While she now disavows and promises to expand those programs, she is unlikely to support expanding them in any substantial way, since she has consistently opposed any form of socialist health care, whether single-payer or Medicare for All. She is also a strong supporter of Israel, having gone so far as to censor her employees on the far-left for criticizing the state. More than that, her track record of general hawkishness seems to be in fresh memory for the left-wing media world: Dozens of recently released articles recount how she once privately suggested forcing Libya to give the U.S. large portions of its oil wealth to compensate for the U.S. bombing them.

Trouble in the Democratic Paradise

Biden’s appointments of figures like Tanden, Yellen, Blinken, and other establishmentarians send a clear message to the democratic socialists. Essentially, they are saying:

We are not for your policies nor are we your friends. Trump was only an obstacle to us because he upset our donors and our power structures. We have no plan to significantly alter the country’s foreign policy, economic policy, or the liberal democratic status quo that existed before Trump. We in fact want it revived.

If the Republican Party has two years of losses ahead of itself, the Democratic establishment won’t have an easy time either. The radical portion of its constituents, fired up by the mainstreaming of socialism accomplished by politicians like Sanders and the Squad, will be zealous and unrelenting in their attempt to push the party leftward.