A largely unknown group of institutes, centers, and funds are invested in election results. 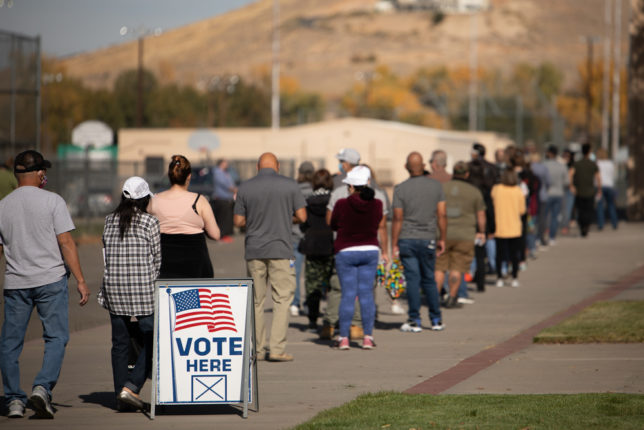 There’s no shortage of “dark money” to aid the Left in its endless campaign to fundamentally transform America’s elections. What is in short supply is a media willing to drag it into the light.

Last month, the Center for Tech and Civic Life (CTCL)—infamous for dispersing $350 million from Mark Zuckerberg in the run-up to the 2020 election—revealed its list of “centers for election excellence,” counties whose election departments had graduated from CTCL’s dubious training program launched earlier this year, the so-called Alliance for Election Excellence.

What’s not being reported is that legislatures in 3 of the 7 states in which these centers reside (Michigan, Wisconsin, and North Carolina) banned or restricted private funding for elections after 2020, only for their Democratic governors to veto the bills—in Wisconsin’s case, twice.

One has to chuckle at using the words “election excellence” in the same sentence as Madison and Las Vegas given their recent track record.

Madison officials helped devise Wisconsin’s notorious Safe Voting Plan in summer 2020, which took advantage of Democratic officials’ last-minute changes to election rules to massively expand mail-in ballot deadlines. Strategists believed the changes would boost Democratic turnout and flip the state for Biden. The plan was explicit about its goal to “be intentional and strategic in reaching our historically disenfranchised residents and communities,” a political term for Democratic voters (per the Southern Poverty Law Center, FairVote, Brennan Center, and Lawyers Committee for Civil Rights Under Law).

This icon of “election excellence” reaped 90 percent of all Zuck bucks statewide in 2020, totaling $2.4 million, or a whopping $4.59 per Biden voter living there. CTCL pampered just one other Nevada county with Zuck bucks: Reno’s Washoe County, which along with Clark County provided Biden with 92 percent of his total votes statewide.

Not one of Nevada’s other counties—all of which broke for Trump—got CTCL cash.

But today’s left-leaning press seems more interested in heaping praise on CTCL for “saving” the 2020 election than questioning the role of a private, unaccountable organization meddling in elections. No wonder CTCL’s Alliance for Election Excellence felt free and clear to add a member of Washington’s most powerful “dark money” network to its ranks in recent months.

That organization, the Institute for Responsive Government, sells its services to government agencies as a way to modernize administration and circumvent gridlock in Congress, with an emphasis on government-driven voter registration policies. Less advertised is its relationship with a $1.6 billion “dark money” network run by Arabella Advisors, whose top nonprofit, New Venture Fund, houses the institute.

Until recently, the Arabella network was Washington’s best-kept secret, a lobbying and funding powerhouse specializing in “pop-up” campaigns focused on defeating conservatives on every issue from Supreme Court confirmations to D.C. statehood. The Arabella network runs on anonymous contributions from the Left’s top donors, including the Gates Foundation and Pierre Omidyar’s Democracy Fund, making it nearly impossible to tell which donor paid for a particular “pop-up” group.

The institute is led by Sam Oliker-Friedland, an ex-Obama administration voting rights litigator who also serves as chief counsel to another Arabella front: the Center for Secure and Modern Elections, which advocates for mail-in ballots and automatic voter registration. At least two staffers from the Institute for Responsive Government previously worked for the center.

It’s likely no coincidence that the center is a founding member of CTCL’s Alliance for Election Excellence. Both are currently under investigation by Louisiana Attorney General Jeff Landry for unlawfully interfering in the state’s election in 2020.

The web doesn’t end there. CTCL co-founder Tiana Epps-Johnson is on the institute’s advisory board. So is Jennifer Morrell, an election consultant for Omidyar’s Democracy Fund and a partner at the vote-by-mail consultancy The Elections Group. Noah Praetz, who ran elections in Chicago and now runs The Elections Group, is a member.

There’s also John Lindback, former director of the controversial Electronic Registration Information Center (ERIC). ERIC ostensibly helps states clean up their voter rolls, but a peek under the hood reveals that it shares sensitive data on millions of voters with the partisan election “reform “group Center for Election Innovation and Research (CEIR), which claims an advisor—the Republican gun-for-hire Trey Grayson—who is also on the institute’s advisory board.

If this sounds complex, it’s par for the course in the Swamp, whose denizens work overtime to pull the wool over Americans’ eyes (and cash big checks for their trouble). This is the professional Left in action. They won’t stop until America’s elections are totally unrecognizable—or conservatives wise up. Until then, our elections are in deep trouble.

This article originally appeared in the American Conservative on December 20, 2022.