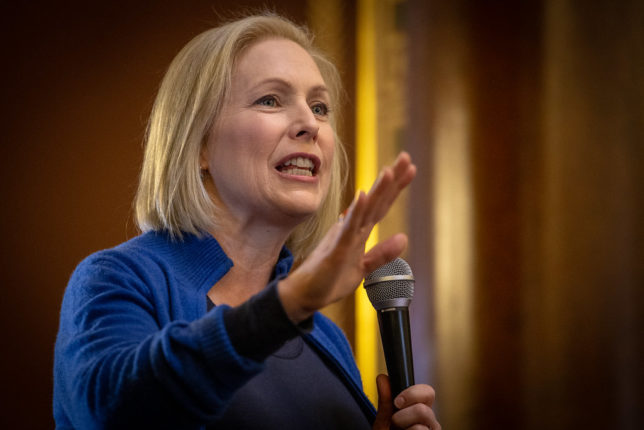 This article originally appeared in RealClearPolitics on June 4, 2019.

In a political era where voters are rewarding authenticity, Sen. Kirsten Gillibrand is at the back of the Democratic primary pack, struggling to square her expedient positions from more than a decade in politics with her new goal of wooing liberal primary voters.

A day after her Fox townhall where she took the news channel to task for its focus on Democratic late-term abortion policies, Gillibrand on Monday was fending off digs from the National Rifle Association that she “would say anything” to give her presidential campaign some traction.

During the Sunday night event, Gillibrand, who is hovering around a meager 1% in the polls, lashed out at the NRA, calling it “the worst organization in the country.” The NRA quickly hit back, releasing a laudatory letter Gillibrand sent the gun-rights group more than a decade ago. In it, the then-congresswoman said she “adamantly opposed” banning guns or “cosmetic features” such as “bullets of a certain size or … magazines holding an arbitrary number of cartridges,” and also opposed creating arbitrary time periods to limit the purchase of firearms.

In addition, campaign-finance experts argue that Gillibrand’s newfound opposition to corporate lobbying and so-called “dark money” also rings hollow in light of her past 12 years in federal office when she became one of Congress’s most powerful and prolific fundraisers.

That fundraising acumen hasn’t translated to her national presidential campaign. Gillibrand barely qualified for the first round of Democratic primary debates on June 26-27, which require a polling threshold of 1% or 65,000 unique political donations and a minimum of 200 donors per state in at least 20 states.

She failed to meet the small-donor standard after spending her career racking up funds from big-dollar sources. She’ll face a harder path to making later debate rounds where she’ll have to meet a 2% polling threshold and double the number of individual donations.

During her Sunday townhall, she pleaded with individual voters to help her make it onto future debate stages by donating to her campaign.

It was a far cry from her past fundraising prowess.

Between 2013 and 2018, Gillibrand raised more than $20 million, almost 60% of which came from large individual contributions and a significant portion from the New York Wall Street firms she represents in the Senate, according to an analysis by the Center for Responsive Politics.

Some $831,000 of those funds, collected in the 2018 cycle alone, came from political action committees, 60% of which represent business interests. With the fundraising support of her Wall Street constituents, Gillibrand sailed to victory, capturing 67 percent of the vote in her re-election last year.

In fact, during the 2018 cycle, Gillibrand received the largest amount of donations to a Democrat from employees of pharmaceutical giant Pfizer and defense contractor Corning. She also received $96,000 from employees of Akin Gump, a major law and lobbying firm, and six-figure donations from three other law firms, two of which Gillibrand previously worked for, according to an analysis of campaign finance records by the conservative Capital Research Center.

But the corporate cash that helped her notch campaign victories in the House and Senate now has its own set of liabilities. Several Democratic 2020 candidates this year have backed away from big money in favor of small-dollar donors, and Gillibrand has tried to follow suit, stumbling in the process.

Early this year, when a flurry of Democratic candidates began throwing their hats into the 2020 ring, several took a stand not to take contributions from lobbyists. After an outcry from the Democratic base prompted South Bend, Ind., Mayor Pete Buttigieg to refund all his contributions from lobbyists in the first quarter, other candidates did the same, including Gillibrand.

The New York senator decided to swear off donations from lobbyists, as well as corporate and trade association PACs, refunding the $3,800 she had already received from two registered lobbyists.

In early May, Gillibrand upped the ante, making campaign-finance reform a central pillar of her messaging. Her “clean elections plan” aims to give all Americans $200 in taxpayer funds she dubbed “democracy dollars” to contribute to federal campaigns.

Candidates who opt into the program would commit to capping all of their donations at $200 in order to give individual Americans a way to participate in the fundraising side of the election process. Gillibrand plans to fund the program by imposing a wealth tax on corporate CEOs.

The voluntary ban on lobbyist donations didn’t hurt Buttigieg or Sen. Elizabeth Warren, who raked in $7 million and $6 million in first-quarter fundraising, respectively. But Gillibrand’s campaign has struggled to gain steam. Without the usual business money behind her, she finished last among her fellow Senate presidential aspirants in the money chase, with just $3 million raised in the first quarter.

Top aides to Gillibrand have suggested these struggles stem from the cold shoulder she’s getting from Democratic mega-donors over her efforts pressing Democratic Sen. Al Franken to resign in the 2017 #MeToo scandal.

Others have pushed back on that notion, arguing that her campaign, which has made running as a woman and access to abortion its central themes, has simply failed to catch fire.

Regardless of the rationale, her cash-strapped campaign is now relying on a $10 million transfer from her 2018 Senate campaign – all funds Gillibrand raked in when she readily accepted donations from corporate PACs, lobbyists and dark-money groups.

This intermixing of money in her 2020 war chest now has fellow “clean elections” advocates crying foul.

“This commingling question raises obvious questions: Is she being misleading with the promises she is making on the campaign trail?” Aaron McKean, legal counsel for state and local reforms at the Campaign Legal Center, told RCP.

“We believe it’s important to combat this special interest money in politics by refusing PAC money and supporting clean elections, but we do want the candidates following through on what they say,” he added.

Gillibrand’s campaign did not respond to requests for comment.

Even though she has recently railed against dark-money groups — organizations that spend money on some political activities without disclosing their donors — conservative critics point out Gillibrand also has benefited from her ties to at least one active group.

In turn, Demand Justice has praised Gillibrand for “standing up to Trump” and his judicial nominees in a series of issues ads.

Demand Justice has some of the deepest dark-money pockets in Washington, a recent report by CRC details. The group is a project of the Sixteen Thirty Fund, a nonprofit that does not disclose its donors. Both organizations, along with several sister groups, are part of a dark-money network run by Arabella Advisors, a for-profit consultancy whose revenues exceeded $1.6 billion from 2013 to 2017, according to the CRC report.