The U.S. House of Representatives overwhelmingly voted to block funding to any remaining ACORN affiliates and to “new” ACORN groups that have sprung up over the last year.

The ACORN network of 370-plus organizations is not actually dead, as I’ve written. It is merely restructuring itself. The lead corporate entity, ACORN, filed Chapter 7 bankruptcy, but the state chapters and other branches of the infamous activist network continue to operate. 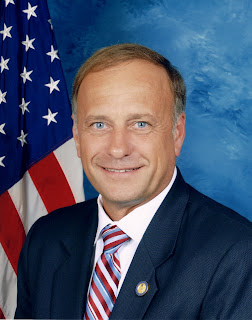 Spearheading the effort to keep taxpayer dollars out the hands of ACORN is Congressman Steve King (R-Iowa), who has also endorsed my new book, Subversion Inc.: How Obama’s ACORN Red Shirts are Still Terrorizing and Ripping Off American Taxpayers. (King is pictured above.)

WND has the story. Here is the top part of the article:

Members of the U.S. House of Representatives, who earlier cut off the federal funding spigot for the Association of Community Organizations for Reform Now – the organization for whom Barack Obama worked – now have decided to put successor organizations behind the same barrier.

U.S. Rep. Steve King, R-Iowa, warned this week of the continuing danger that election fraud-prone ACORN poses to American democracy, and the House subsequently voted to cut off federal funding to the still-functioning group.

“ACORN is a corrupt criminal enterprise that threatens our democratic system of government by systematically committing voter registration fraud,” said King, a longtime ACORN critic. “American taxpayers should not be asked to fund an organization that is dedicated to corrupting the sanctity of every American’s vote.”

In the Thursday action, the House voted 231-188 to bar existing ACORN affiliates and its renamed successor groups from receiving funding under the $42.3 billion Department of Homeland Security appropriations bill for fiscal 2012 (H.R. 2017).

The ACORN defunding language was inserted into the bill when an amendment King offered was adopted on a vote of 251 to 168. It is unclear when the Senate will begin consideration of the full spending bill.

The fiscal measure identifies several ACORN affiliates by name and prevents government money from being provided to them. A King aide said without the funding prohibition some DHS grants could find their way into ACORN’s coffers.

King previously described the scandals involving ACORN, which used to employ Obama as organizer, lecturer, and attorney, as “the largest corruption crisis in the history of America.” […]

America needs to know that ACORN is restructuring in time to help re-elect President Obama in 2012. Obama used to work for ACORN and represented the group in court as its lawyer. These radical leftists who use the brutal, in-your-face, Machiavellian pressure tactics of Saul Alinsky want to destroy America as we know it and will use any means to do it.