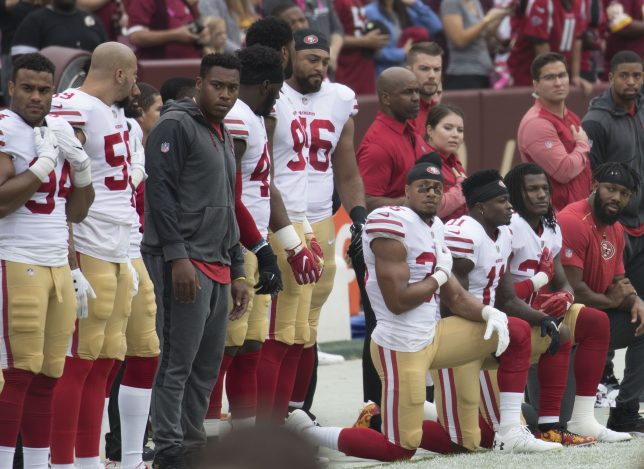 This article originally appeared in American Greatness on September 7, 2018.

It started with football players protesting the National Anthem, and ended, as protests often do, with money changing hands: The vile Colin Kaepernick becomes a highly compensated spokesman for Nike, and the NFL tries to pay off activist players with tens of millions of dollars for leftist causes.

In August 2016, Kaepernick, then the quarterback for the San Francisco 49ers, began sitting or kneeling during the National Anthem as it was played before games. “I am not going to stand up to show pride in a flag for a country that oppresses black people and people of color,” Kaepernick told NFL Media. “To me, this is bigger than football and it would be selfish on my part to look the other way. There are bodies in the street and people getting paid leave and getting away with murder.”

Other players joined in, the protests reaching a peak at which hundreds of players sat or knelt or raised their fists during the anthem. Most Americans objected. Failing to stand respectfully during a country’s anthem, or while that country’s flag is presented, is not just a form of protest; it is precisely how one might express disrespect for that country and its people.

Following negotiations with the Players Coalition, a group of about 40 players, the NFL announced in November that it would set up a “social justice fund” totaling $89 million over seven years.

Of the $89 million, $73 million would be distributed nationally, and split three ways:

One-quarter to Dream Corps, a “social justice accelerator” whose president is Van Jones, a star at CNN. Jones served as “green jobs czar” during the Obama Administration, declaring that “the green economy” would be “the engine for transforming the whole society.” He lost that job when news broke that he had signed a petition suggesting the U.S. government “deliberately allowed” the 9/11 attacks. During CNN’s Election Night coverage in 2016, Jones said that Trump’s victory was the result of “a whitelash against a changing country . . . against a black president in part.” (In fact, Trump’s margin of victory came in 206 counties that voted for him in 2016 after voting for Obama in 2008 and 2012.)

One-half to the Players Coalition, overseen by the Hopewell Fund, in turn managed by Arabella Advisors. Arabella, which shares office space with Hopewell in Washington, D.C., guides spending by left-wing nonprofits. It was founded by Eric Kessler, who served in the Clinton Administration and is a former national field director of the League of Conservation Voters. Kessler serves as chairman of the New Venture Fund, at the same address as Hopewell and Arabella. In turn, New Venture takes money from unions and foundations and sends it to groups favored by rich leftists.

That’s fitting, given that Kaepernick is rich and, above all, a leftist.

Later, at a press conference, Kaepernick wore a shirt, captioned “Great minds think alike,” that depicted a meeting between Malcolm X of the Nation of Islam and Fidel Castro, the racist dictator of Cuba. (Castro’s many crimes against humanity include running concentration camps for gays and urging the Soviets to nuke the United States.) By the way, that meeting in 1960 was arranged through a pro-Castro group, the Fair Play for Cuba Committee. Three years later, Lee Harvey Oswald set up FPCC’s New Orleans chapter, then assassinated President Kennedy.

Kaepernick’s foundation donated $25,000 to the group Assata’s Daughters, which honors Assata Shakur (Joanne Chesimard), who murdered a New Jersey state trooper, broke out of prison, and obtained asylum in Cuba. Shakur is on the FBI’s list of most-wanted terrorists. According to the leftist Mother Jones magazine, “Organizers affiliated with Black Lives Matter use [Shakur’s] sayings to open and close protests and meetings.”

For his protests, Amnesty International gave Kaepernick its “Ambassador of Conscience Award,” which once went to the likes of Nelson Mandela and Václav Havel. Sports Illustrated, a corporate sister of CNN, gave him the “Muhammad Ali Legacy Award.” The ACLU gave him the “Eason Monroe Courageous Advocate Award,” named for an ACLU official who helped end requirements that government employees swear loyalty to the United States. At the ACLU event, Kaepernick was praised—“Colin, you are woke!”—by Jane Fonda, who supported the Soviet Union’s ally North Vietnam during the Vietnam War.

Kaepernick was named “Citizen of the Year” by GQ, sister publication of Vanity Fair and The New Yorker. Recently, at the U.S. Open, he was spotted in a luxury skybox, and the wealthy crowd gave him a standing ovation.

He’s been name-dropped in at least 25 hip-hop songs.

In Nike’s new campaign, celebrating the 30th anniversary of its “Just Do It!” slogan, an ad shows a close-up of Kaepernick’s face with the words, “Believe in something. Even if it means sacrificing everything.”

For his role in the campaign, Kaepernick will be paid millions of dollars, and will get his own line of shoes and apparel. He will make much more money than he would have made if he had never started the protests. In the years to come, honors and awards will pile up; he will be famous and admired, a person of influence and respect.

All this, for “sacrificing everything.”