Clinton Foundation on Giving Away Weinstein Donations: “We Are a Charity” 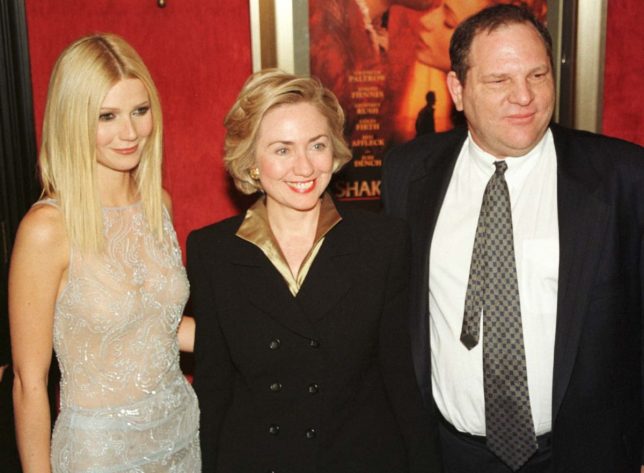 Image via the Daily Caller, goo.gl/QqBhm
by Jacob Grandstaff

Hillary Clinton should probably look up the definition of “fungibility” in a dictionary.

When news broke that Hillary Clinton donor and “friend” Harvey Weinstein, a Hollywood producer, had sexually harassed and assaulted dozens of women, Clinton took six days to condemn the actions – and then only after two allegations of rape surfaced.

Perhaps she feels bad about condemning a campaign donor. Weinstein is a Clinton donor, and in 2016 gave the maximum contribution allowed by law ($5,400) to Clinton’s presidential campaign. But she’s hesitant to give the tainted money back.

Many other Democratic politicians have already said they would use Weinstein’s donations to their own warchests for charity, particularly those that deal abuse of women. Clinton promised to do the same, saying she gives 10 percent of her income every year to charity, and Weinstein’s donations will be “part of” that sum. But she did not specify whether the amount will be in addition to the ten percent she already gives, or if she will simply consider $5,400 out of the ten percent to be the money that Weinstein gave.

If it’s the latter, that’s like saying John Doe gave me five $100 bills toward my candidacy for city council, but I later found out he’s an awful person. So I decided to give those five bills to the animal shelter this month, and instead use the $500 I normally give every month toward my city council campaign.

If Clinton doesn’t intend to give an additional $5,400 to charity, she should make that clear. But it does make one wonder if she doesn’t expect her audience to understand the concept of “fungibility,” or if she really thinks considering Weinstein’s $5,400 donation to her failed campaign as part of the amount she would give anyway to charity a legitimate riddance of the $5,400.

The failing Clinton Foundation, however, has made it abundantly clear that it will not be returning up to $250,000 in donations that Weinstein has given the organization since 2003, saying, “We are a charity.”

If the Clinton Foundation were an honest, transparent philanthropy, that would make sense. Even though the money that Weinstein gave was tainted by its filthy owner, at least it would have been spent helping people.

Barbara Joanna Lucas writes in the May 2015 edition of Foundation Watch,

It should be said that the Clinton Foundation has done some legitimate charitable work. Still, so much of the foundation seems like little more than a cauldron of conflicts and cronyism. Even if we assume the motives of the foundation’s founders are completely selfless, the organization has functioned to keep the Clintons relevant after leaving the White House. That has helped lead to greater millions in speech fees and jet setting and mingling with the hottest in Hollywood and smartest corporate titans.

But for those who don’t consider the Clinton Foundation a proper charity, the Foundation’s leadership feels it has covered its bases here as well. Its spokesman told Fox News that the money Weinstein gave is gone. They’ve already spent the donations on “fighting childhood obesity and HIV/AIDS, combating climate change, and empowering girls and women, and… have no plans to return [the money].”

This, of course, is nonsense. All money is fungible. The claim of this spokesperson is like Planned Parenthood claiming it won’t use the tax dollars it receives for abortions, or a bourbon-drinking landlord promising not to use his dry tenant’s rent on alcohol. Even if they don’t, that influx of cash will free up additional money for abortions and alcohol. All the Clinton Foundation has to do if it wants to rid itself of Weinstein’s tainted donations is give it all away to a women’s foundation, and, like Clinton herself, just pretend that that sum is the six figure sum that Weinstein actually gave.