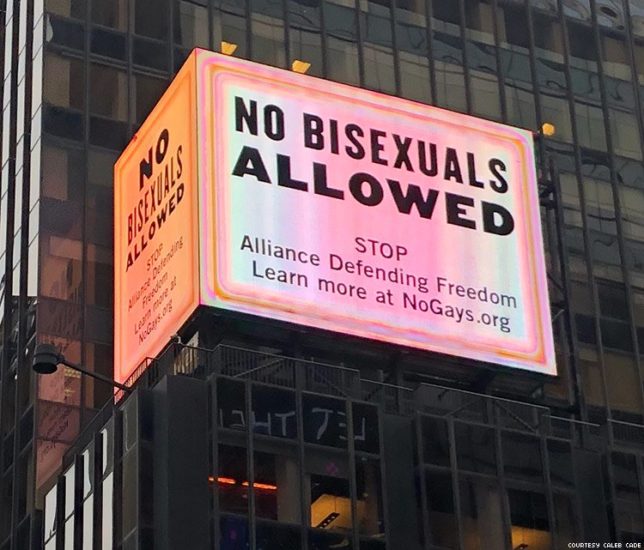 If you watched the Macy’s Thanksgiving Day Parade, you may have noticed one billboard in particular flashing the words: “NO GAYS ALLOWED.” The billboard urged onlookers to “STOP Alliance Defending Freedom” (or ADF), a conservative Christian nonprofit based in Arizona.

According to its website, ADF promotes “religious freedom, sanctity of life, and marriage and family” through pro bono legal action, and it’s done so since the nonprofit was launched nearly 25 years ago. But if you believe the folks behind Citizens for Transparency, the mysterious campaign that paid for the Times Square billboard, ADF’s goal is passing laws “that essentially make it illegal to be gay.”

Is that an extreme accusation? ADF certainly thinks so. According to the group’s measured response, the billboard is an attempt “to smear us behind the shade of anonymity,” despite ADF’s history of “defend[ing] the right of all Americans to live according to their beliefs.”

The group apparently justifies its smear by citing the Southern Poverty Law Center (SPLC), which has labeled ADF a “hate group” and accused its president, Michael Farris, of being a “theocratic right-wing activist” and—horror of horrors—a “Baptist minister.”

Citing the SPLC’s much-discredited “hate map” should give anyone pause. The group is infamous for falsely accusing mainstream center-right organizations of promoting “hate.” Left-wing gunman Floyd Corkins, who attempted to murder the staff of the advocacy group Family Research Council in its Washington, D.C., headquarters in 2013, told authorities that he used the SPLC’s hate map to target the Christian nonprofit for supposedly being “anti-gay.”

And in June, the half-billion-dollar “Poverty Palace” was forced to retract its inclusion of liberal Muslim political activist Maajid Nawaz in its Field Guide to Anti-Muslim Extremists for criticizing radical Islamist terrorism. In the end, the SPLC issued a formal apology—and $3.4 million—to Nawaz.

But who is Citizens for Transparency, anyway? As it turns out, the group has a bit of a transparency problem. Jeremy Tedesco, senior counsel to ADF’s legal team, told CRC that Citizens for Transparency couldn’t be more opaque. “They have no website, no tax filings, no record of any previous work, and no identifiable leadership,” Tedesco said. “For a group that has ‘transparency’ in its name, it seems to be hiding in the shadows.”

Citizens for Transparency doesn’t have a website explaining who’s part of its coalition. Instead, it hosts two attack websites: NoGaysAllowed.org and TruthAboutADF.org, both of which are dedicated to smearing ADF. The latter currently redirects to the former, but the WayBack Machine reveals a scrubbed site accusing ADF of “waging a war against lesbian, gay, bisexual, and transgender people–advocating for laws that basically put gay people in jail, supporting the sterilization of transgender people, and spreading lies and misinformation.”

Both websites bear the hallmarks of the professional Left’s handiwork. The sites are registered to DomainsByProxy.com, a company that hides web domain ownership for a fee. Hamburger Gibson Creative, a digital marketing firm that caters to left-wing clientele, credits itself with producing the campaign’s digital content.

But CRC uncovered what Cade doesn’t mention in his statement: his position with the Smoot Tewes Group (STG), a Democratic Party-affiliated consultancy based in Washington, D.C. Cade confirmed to CRC via email that Citizens for Transparency is a client of STG. Although Citizens for Transparency cites the Southern Poverty Law Center, he claimed that “[t]his campaign has nothing to with SPLC.” Asked whether President Clinton was homophobic for his Don’t Ask, Don’t Tell policy, Cade said: “Yes. Like many politicians, he has evolved in his thinking and policy positions.”

Unsurprisingly, STG is well-connected in the Democratic Party. Its client list includes the pro-gun control Giffords PAC, pro-abortion EMILY’s List, Obamacare preservation committee Protect Our Care, Tom Steyer’s NextGen Climate Action, the Democratic Party’s Senate Majority PAC, the liberal fundraising service ActBlue, and even the Obama Foundation. The firm was founded by two Obama campaign alumni, Julianna Smoot and Paul Tewes, who have since left but remain strategic partners. Smoot serves on the board of the Obama Foundation and the board of the Planned Parenthood Action Fund.

Also connected to Citizens for Transparency is campaign manager Roey Thorpe, who bills herself as a senior strategy consultant.  Until recently, she directed strategic projects for Equality Federation, a gay rights advocacy group.

While it remains unclear who’s funding Citizens for Transparency, a similar campaign against ADF from April 2017 may hold some answers. The “Eliminate Hate Campaign” was created by Media Matters for America, an anti-conservative attack group, and it bears similar supporters as Citizens for Transparency: the Equality Foundation, National Center for Transgender Equality, National LGBTQ Task Force, SoulForce, and Matthew Shepard Foundation.

Could Media Matters be the group pulling the strings of Citizens for Transparency? The connection, while unsubstantiated, is possible. But why all the secrecy?

“Public discourse can get ugly,” ADF’s Tedesco said, “and unfortunately, Citizens for Transparency has chosen to get ugly. If they want to take shots at us and our good work, they can do that—but we’d prefer that they say who they are and engage us on these issues instead of trying to shut down debate.” That Citizens for Transparency chose to lean on the SPLC—which has been denounced by people from across the political spectrum—shows a greater interest in playing to the far-left than debating policy.