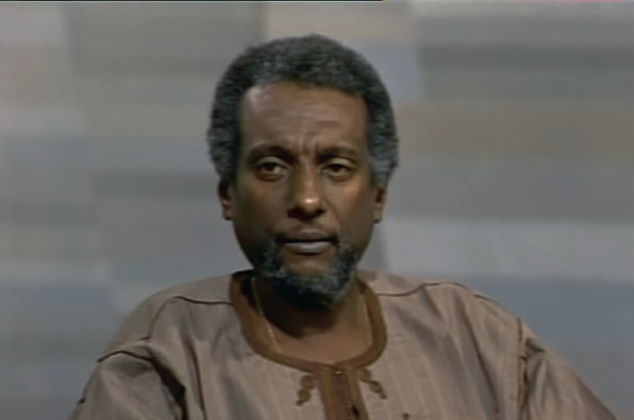 Stokely Carmichael was a civil rights activist, but he was really an explicit black nationalist. He moved to Africa in the early ’70s with the goal of forming a Pan-African communist black ethnostate and renamed himself Kwame Ture after two communist dictators in Africa. Credit: AfroMarxist. License: https://bit.ly/2MdaOwK.
by Joseph (Jake) Klein

Klein: I agree completely. Something I’ve been really astonished by in my research is the extent to which the communities for whom these ideas claim to speak don’t agree with them at all. Something that I found is you had educators in the late ’60s, early ’70s period who were adopting black nationalist ideas and turning it into this ideology. You had polling at the time demonstrating above 95 percent of African Americans disagreed with these ideas. At the same time, you had mostly white educators developing and teaching these ideas to other white people. I have a quote from one of them saying essentially that most black people don’t understand their own experience, and we need to appeal. We need to learn from that sub 5 percent group of African Americans that truly authentically understand their own experience and then teach that to all white people. [It] is just fascinatingly baffling how absurdly racist it is to say African Americans don’t understand their own life experience while teaching about racism.

Rufo: I mean, it’s always been this way. In a way it’s not surprising because if you look at the Bolshevik Revolution 100 plus years ago now, they were really frustrated by the same principles. Even Marx himself was frustrated, basically saying, “Ugh, we’ve hoped for this spontaneous revolution of the proletariat, but the proletariat seems uninterested in revolution. They don’t want to sign up for the program. They don’t understand their own oppression. They have false consciousness that has been embedded into them by the bourgeoisie and the oppressors. So we need to, on their behalf as the intellectual vanguard, conceptualize it and refeed it back to them, and lead as the vanguard of the proletariat.”

This is the same thing but with racial issues. Robin DiAngelo, white scholar of Seattle, is the vanguard of the black revolutionary spirit. I mean, it’s ridiculous. It’s hard to even look at these things with a straight face, but they’re so pernicious, and they somehow function despite this surface-level absurdity. You have to take it seriously. I spent three years in and out, working on a film in a public housing project in Memphis, Tennessee: 100 percent African American, 100 percent under the poverty line, nearly 100 percent single-parent families. If there is an oppressed group in the United States—if we’re making an argument that there is racial oppression—this would be it. I mean, this is the fourth poorest zip code in the whole country. I spent years talking to people, learning from people, interviewing people, and observing, and none of this language ever emerged, not once. The things that the critical race theorists have conceptualized as oppression—faith, Christianity (the oppressive, opium-of-the-masses religion), family structure, the earned income system, or entry-level employment that is a capitalist oppression—those are the things that people really wanted.

People really wanted to get a good education. They wanted to move up and out of the housing project. They wanted to get a meritocratic job and opportunity. They wanted to restore families that had been broken in many cases for generations, and the anchor in this community for I’d say the majority of people was the church. The Southern black church that was still, despite dislocations over the years, the moral center of these communities.

I just find it astonishing that you have Ivy League, white intellectuals that are essentially preaching down and trying to say, “Actually, all those things that you believe in, those are the things that are oppressing you.” [They are] ignoring the real on-the-ground experience and conceptualization of people who are living it, just casting aside all of that experience and saying, “Actually, I understand your experience better than you.” It’s so insulting and infuriating.

In the film I try to give as much latitude, as much expression as possible to people who are there, people who are experiencing it. And again, I never once heard that kind of revolutionary rhetoric actually on the ground from people in these communities.

Klein: The film is really excellent, by the way. Again, I want to recommend people go to americalostfilm.com to check that out. You talked about religion there. I’m myself am an atheist, so I’m not that connected to that end of things, but I have found it really interesting tracing these ideas, the extent to which the role of religion in this has all changed. Because again, one of the really important groups in founding and spreading these race trainings in the late ’60s and early ’70s was a group called the Detroit Industrial Mission. They were a mission. They were a religious group. I think you can make a really strong argument for why Christianity isn’t compatible with these ideas, but they were trying to come at it from a Christian perspective. They were teaching it very much from the Christian perspective. Now it’s completely the opposite. I don’t know who’s responsible for that, maybe it’s just a general societal shift, but it’s interesting.

Then that false consciousness point that you bring up. I mean, that is spot-on. You’re really tracing that further back than I am because where I start my book is talking about Stokely Carmichael. Stokely Carmichael was a civil rights activist, but he was really an explicit black nationalist. He was an explicit communist. He moved to Africa in the early ’70s with the goal of forming a Pan-African communist black ethnostate and renamed himself Kwame Ture after two communist dictators in Africa. His definition of institutional racism is, I think, really where a lot of these ideas started to develop. He ran an organization called the Student Nonviolent Coordinating Committee, which used to be run by John Lewis, but then John Lewis lost an election, Stokely Carmichael won and the organization went way radical. He held a vote to kick all the white people out of that organization and told them to go back into the white community and teach my ideas because black people and white people shouldn’t work together to end racism. Instead, white people should work on their own to end racism in the white communities based on my ideas.

That’s where a lot of these race trainers in the ’60s and ’70s came out of. These people that were involved in the Student Nonviolent Coordinating Committee, got kicked out, and went and taught these ideas.

So that whole thing of thinking they know better than the vast, vast majority of African American came from an explicit orthodox Marxist. So it’s interesting to hear you connect those dots because that lines up exactly with what I found.

I want to pivot a bit back to Seattle because you’re from that area, and that is another area where it’s gotten really bad. You mentioned earlier that you had leaked documents from whistleblowers about trainings going on there. Also, you just published an article in City Journal about how these ideas. The activists are taking it into the policy arena, pressuring politicians and really making policy changes in terms of defunding the police and stuff like that. So, have you seen any connections between the documents that the whistleblowers leaked to you and the specific ideas that are being taught in the Seattle area to what’s going on in the policy arena level?

Rufo: Yeah, yeah. I mean, it really is interesting. I think that most people, most Americans kind of zero in on the national politics, where national politics in the United States is still pretty middle of the road. The actual legislation that gets kind of hammered through in Congress is fairly middle of the road. That’s my analysis, just take it or leave it. But what’s happening is that you’re seeing a huge split now. Whereas you have countervailing factions within Congress, where you have Republicans and the Senate especially representing predominantly Republican states, and then you have even Blue Dog Democrats, or you have your Joe Manchins who is a Democrat but he’s from West Virginia. He’s going to moderate whatever policies that are being spun up by the Ocasio-Cortezes and the Ilhan Omars. What activists have realized, to their credit, is that in municipal politics there isn’t really a countervailing faction or a counterbalancing vote. So if you’re in Minneapolis or Seattle or Portland or San Francisco, the political center of gravity is to the furthest left: the Democratic socialist, Antifa, Black Lives Matter. All of the energy in these cities is really there with the very far activist left.

They’ve realized that municipal politics is no longer filling potholes and getting the buses running and salting the roads. They’ve said, “Hey, municipal politics is really our shot at transforming governance into these progressive utopias.” They’ve gotten really aggressive about it from electing prosecutors who are very far left to the decriminalize-everything-under-felonies mantra that they’ve adopted to local councils. In Seattle, they’re really going straight forward. Their activists have said, “We need to abolish the police, at least cut 50 percent. Defund the police. We need to shut down the county’s largest jail.” The county executive recently announced they’re going to reduce jail capacity by nearly two-thirds.

Then we also need to abolish the local courts. Get rid of municipal judges that are handling misdemeanor compliance predominantly. Reduce it to the smallest possible number of judges, just a handful, maybe two or three judges. So they’re trying to overhaul the justice system locally in a way that they could never do nationally. The documents, the demands from the protests groups and in the trainer documents that I’ve seen, and then the internal documents from the county executive here and others are really the same narrative.

You can see the pervasive influence of the activist ideology, where the county executive of King County, Washington—the largest in the state—is saying the criminal justice system is predicated on white supremacy and needs to be dismantled for all of these reasons. There’s really little separation now between activist ideologies from the outside and the activist ideology from the inside, to an extent that I think that most residents are just now starting to understand. I think that for the foreseeable future the activists are really in the driver’s seat, and we’ll see how far they can get.

In the next installment, consider the three most disturbing concepts in critical race theory.