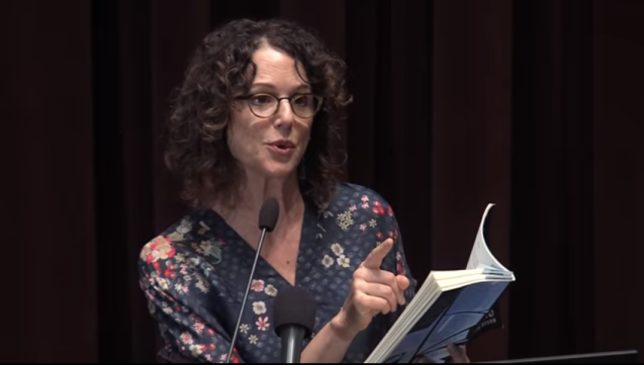 Klein: Well, I want to add a couple points, and then let’s talk about those political changes. Which is that concept of if you deny your white fragility—White Fragility is the name of Robin DiAngelo’s book, and she is most associated with that theory. If you deny your white fragility, that’s evidence of your white fragility. That’s something James Lindsay has called a Kafka trap. It’s good to recognize that logic because it just points out how that entire framework just falls apart. There’s no legitimate way to criticize it at all. Then this part about it getting into the corporations because they just feel like they have to do it. 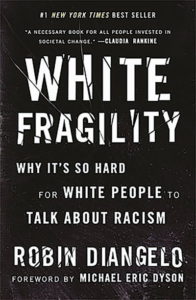 White Fragility is the name of Robin DiAngelo’s book, and she is most associated with that theory. If you deny your white fragility, that’s evidence of your white fragility. That’s something James Lindsay has called a Kafka trap. Credit: Beacon Press. License: https://bit.ly/2YjrvZV.

In some of the research I’ve been doing, I’ve been tracking corporate trainings for these sorts of ideas, going back to the late 1960s before there even was a thing called critical race theory. The same ideas were being taught by the original race trainers before it became a formal theory. They had something called an inside outside strategy. This was started by a man named Robert Terry who worked at a place called the Detroit Industrial Mission, teaching these ideas mostly around Detroit.

The idea was what we need to do is get people inside businesses, and they were working mostly at auto companies and industry that was associated with Detroit in the era. Let’s get them to pressure people that racism is a huge problem—which it was back then—and we need to do something about it. Then they have the outside groups that are prepared to rush in and provide those trainings. Those outside groups are explicitly socialist, but they’re not communicating that to people. The whole idea was this is how we’re going to prepare to get the businesses on our side for a literal socialist revolution. We’re going to get those inside people to bring us in and then we’re going to change the organization from within. So that’s a real strategy that they had, and we’re really seeing that actually pay off now.

I also worked on a video recently about Black Lives Matter, and it’s not just about police violence and stuff like that. If you look at what the actual Black Lives Matter organization is promoting, not just people saying that as a hashtag, or protesting, or whatever. [They] want explicit socialism. They praise Fidel Castro. They’ve advocated for abolishing the nuclear family—real crazy stuff. You know who is giving money to them? Microsoft, the Pokémon Company, Dropbox, Pusheen, Bungie—these random video game companies and major cultural institutions that you wouldn’t think as capitalist companies would be supporting explicitly socialist groups.

Something that we saw recently was—a positive thing from this past election—California did not pass Proposition 16, which was going to amend the state constitution to allow racial discrimination and racial preferences in education, contracting, and employment. What do you make of that victory and what can we learn as those issues come across on the ballot and in state legislatures across the country?

Rufo: Yeah, California is interesting, and there was a similar ballot fight here in Washington State, one or two years ago. The same thing was on the ballot. Essentially, they were trying to allow for race-based discrimination in college admissions in Washington State and public hiring. This is a fight that they had fought I guess more than 20 years ago. Washington State voters with a large majority said, “Hey, no. We want to have colorblind neutral admissions, no affirmative action.”

When it came up again the interesting thing, and similarly to California, Ward Connerly, who helped run the initiative and advise the [California] initiative, also worked on the initiative here in Washington State. The real driver of both initiatives were Asian Americans because Asian Americans realized that they were going to really bear the massive brunt of the burden in especially college admissions. Their idea was, hey, we came to the United States, in many cases fleeing communist countries for individual liberty, political equality, and for meritocracy—basically saying if you study hard, you excel in education, you can have a high-quality education and then move up in the world. They really felt like that was under threat, that their college admissions would plummet, their opportunities would plummet, and they fought for it.

I think this is a moment where Asian Americans, white Americans, and, I believe, even Latino Americans in California voted against the race-based preferences. I think that it really shows that people, despite the political dominance of the Left in a state like California, \ still believe in the ideas of meritocracy, colorblind admissions, and earned success. And they’re rejecting the most polarizing, racially divisive policies. You’re finding leadership in the Asian American community that typically has not been involved in American politics to a large extent. They’re becoming mobilized because they’re sensing a danger to their own fortunes.

I think that you’re going to see, especially where they’re most exposed in the West Coast, a real realignment. First in Asian Americans and then among Latinos and Hispanics where they’re going to start to realize that the Left that has traditionally and culturally been their home doesn’t actually have their best interest at heart. And they’re going to be looking for another place to put their vote, to put their power, and I think these ballot initiatives have started what could be a big realignment along ethnic and political lines.

Klein: Going forward, as more of these things come up whether ballot initiatives or other ways of doing it, do you think this theory gains more ground and they start winning those fights? Or do you think the coalition that you described stays steady, grows, and manages to successfully defeat this ideology?

Rufo: Yeah. I’m optimistic. I’m optimistic because you’ve [defeated] the ballot measure in California, which was sponsored by the largest corporations in the world and by the Democratic political machine that has a supermajority in the California legislature, and then was pushed by all of the Hollywood stars and most famous people in the state against a ragtag group of formerly politically disengaged Asian American noodle shop owners, small business people, and dry cleaners.

I know Washington State better. I spoke at the dinner celebrating the victory, and it was predominantly Asian American and people who had supported the campaign who got up to speak. It was literally noodle shop owners, delivery truck company drivers, testing and tutoring center owners, Microsoft middle managers—really a predominantly working class and then some professional class Asian Americans—and a lot of recent immigrants that beat the political machine. They beat all of the major corporations, the Microsofts, the Amazons, the Kaiser Health, and they won because they had a popular issue. They were denounced as white supremacists. They were denounced in the media. Everyone was against them, but they managed to cobble together a coalition that won in Washington State and then by an even bigger margin in California.

So I think it shows there’s a ceiling to this stuff. No matter how much money, no matter how much star power, no matter how much corporate support, there’s a ceiling to these ideas because they’re unpopular. They rub people the wrong way. They undermine core values that are more deeply held. I think the real limit is really the Republican Party. When you have it on a partisan basis—when people are deciding between Democrats and Republicans in California, Oregon, or Washington—they’re going to break Democrat because the Republican Party has such a destroyed and kind of underwater brand. But when you actually look at it on the issues in the language of a ballot measure that is nonpartisan by nature—that is not connected to a person or a party—I think there’s a clear ceiling and that we can work from the issues outward. Winning on ballot measures, winning on individual issues, winning with the public, and then hopefully over time cobbling that into a political coalition that could win legislative races, gubernatorial races, etc.

Klein: So you talked a lot there about this being pushed by Hollywood celebrities, big wealthy figures, and major Democratic politicians. That seems very strange that these ideas are largely being picked up by college-educated persons of higher class. Given your work on poverty issues, why do you think we’re seeing this. And again, I don’t have data to back that up. I could be wrong that it’s mostly a higher-class thing. So I guess, do you agree with that premise, that it is a higher class thing? What do you see in terms of what people actually in poverty, people actually suffering, think about all this that’s allegedly being pushed on their behalf?

Rufo: I have an interesting window where in my investigative reporting starting this summer I really dove deep into the ideology of critical race theory, reading the texts, reading the trainings, doing the investigative reporting, talking to people who’ve gone through some of these programs. Then also in my background as a documentary filmmaker and a writer, I’ve spent a lot of time in the poorest communities in the United States, and the gap between these two things couldn’t be larger.

The gap is really huge. I think the real moral crime of critical race theory is that it serves to establish and secure the social status of woke elites of all races. So that if you are the fashionable critical race theory intellectual denouncing oppression, the nuclear family, earned income, and all these things, you’re going to get the prestigious Atlantic byline. You’re going to get the professorship at an Ivy League school. You’re going to be speaking for $20,000 a pop at the Shell Oil shareholders meeting or whatever. But it really does nothing for the people at the bottom. Again, for all races, it does nothing for a poor family in Memphis, Stockton, Bakersfield, Youngstown, or Gary, Indiana. Critical race theory has nothing to offer people who are actually living at the bottom of our society.

It’s even worse than that. It actually undermines the very institutions that are essential for people that are growing up and living in those communities. So I think critical race theory is deeply self-serving for elites and deeply destructive for the poor Americans of all racial backgrounds. Personally I don’t care that Robin DiAngelo gets paid 20,000 bucks to speak at a thing. It doesn’t bother me. These corporations that are hosting these things are doing well. They can waste their money in unlimited amounts of ways? And I don’t really care that Ibram Kendi is getting big payouts from tech companies. Whatever. That’s fine.

What I really, really truly feel is an outrage is that these things really truly do nothing to alleviate suffering for the poorest Americans. I actually think they create a values-based chaos that is destructive to those communities. So, that’s where I come into it. I think it’s hypocritical, self-serving, and ridiculous, but I think it actually is something much deeper than that: The actual destructive power of these ideologies shouldn’t be underestimated.

In the next installment, explore the origins of critical race theory and other destructive ideologies.