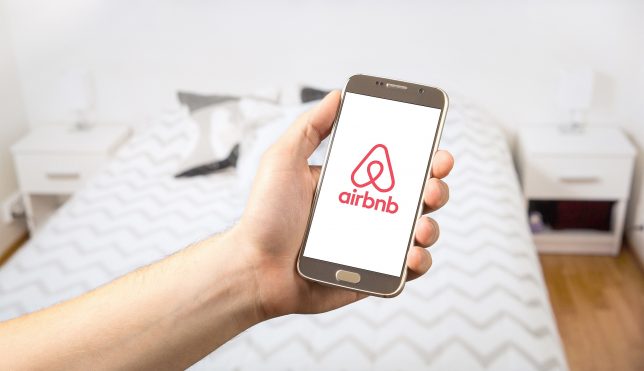 Last week, Airbnb announced that it would be removing all listings from Israeli settlements in the West Bank. The news came after supporters of the boycott, divestment, and sanctions (BDS) movement campaigned for Airbnb to remove the listings.

In a press release on its website detailing how the company will deal with “listings in disputed regions,” Airbnb focused explicitly on homes rented out in the Israeli settlements in the West Bank. Airbnb explained that, after speaking to “various experts,” the company decided it needs to consider the impact its policies have and “act responsibly.” In the post, Airbnb revealed its new “framework” for dealing with property in “occupied territories”:

Airbnb concluded after analyzing “occupied territories” through this new framework, it would be removing listings from “Israeli settlements in the occupied West Bank that are at the core of the dispute between Israelis and Palestinians.” Airbnb then discussed the company’s hope for peace.

Days before Airbnb’s decision, Al-Jazeera–a broadcaster funded by the government of Qatar–published a story titled, “How the tourism industry underpins illegal Israeli settlements.” In the piece, Al-Jazeera claimed it was reporting from the “Occupied West Bank” and discussed how Israeli settlements in the area are “illegal under international law.” In the piece, Al-Jazeera shared a link to another one of its stories from 2016, specifically focusing on Airbnb and Israel, titled, “Airbnb lists homes in illegal Israeli settlements.” The summary of the piece read, “Critics say the online accommodation service is promoting stolen Palestinian property and land.” The piece quoted Fatah faction official Husam Zomlot, who called the listings “illegal and criminal” and said Airbnb is “promoting stolen property and land.”

According to Reuters, the decision by Airbnb was made the day before Human Rights Watch was set to publish a report criticizing Airbnb, and other rental listing services, for hosting listings in “unlawful” Israeli settlements.

BDS activists have also joined Al-Jazeera and Human Rights Watch in pressuring Airbnb to prevent Israelis from renting out their property in the West Bank.

The U.S. Campaign for Palestinian Rights website dedicated to fighting “Airbnb Stolen Homes” claims there are 13,000 Israeli Airbnb listings, but “many of the properties are actually located in settlements built on stolen Palestinian land in the West Bank.” The site asserts that, by allowing people to list and rent from Israeli property in the West Bank, Airbnb is “making money off of Israel’s continued military occupation of Palestinian land and helping facilitate settlement activity.”

The official website for the Stolen Homes campaign is hosted by Jewish Voice for Peace [JVP], a Jewish organization with a history of distorting the religion for its pro-Palestinian activity. On its website, JVP claims over 150,000 people have signed up to support the movement to stop Airbnb from allowing Israelis to list their properties in the West Bank. The petition page states the Stolen Homes campaign is organized by American Muslims for Palestine [AMP], CODEPINK, Friends of Sabeel North America [FOSNA], SumOfUs, Uplift, the U.S. Campaign to End Israeli Occupation, and the U.S. Palestinian Community Network.

As Airbnb announced its decision to remove listings in Israeli settlements in the West Bank, the official Twitter page for the BDS movement shared the recent Al-Jazeera story and tagged Airbnb’s Twitter account in the post, saying the site, and others like it, “profit from and normalize Israel’s illegal land grabs.”

After the announcement, the U.S. Campaign for Palestinian Rights tweeted Airbnb’s decision was “Another BDS WIN!!!” Canadians for Justice and Peace in the Middle East [CJPME] called the move a “BREAKING BDS SUCCESS” and praised Airbnb for saying the Israeli colonies are at the core of the problem and for “standing up for Palestinian human rights.” The Ireland-Palestine Solidarity Committee [IPSC] praised the “Absolutely huge BDS win!” and claimed the BDS movement is “UNSTOPPABLE!”

A Wall Street Journal piece by Eugene Kontorovich, the director of the Kohelet Policy Forum in Israel, sheds light on how Airbnb’s framework is only being applied in the case of Israel (and American Jews who own property in the Israeli settlements):

Airbnb lists homes in Moroccan-occupied Western Sahara, one of the world’s most brutal occupations. It lists vacation homes in northern Cyprus, which Turkey invaded, expelling almost all Greek Cypriots and expropriating their homes. Nor does Airbnb have a problem serving Kashmir, Tibet and other such places. Last week a Kohelet Policy Forum report revealed many major companies active in the West Bank also do business in occupied territories and with settler regimes around the world, without a word of criticism from the groups that pressured Airbnb.

Kontorovich’s piece brings up an important point: in the Airbnb press release about its decision to remove listings in the West Bank, it starts off by saying “many in the global community have stated that companies should not do business here because they believe companies should not profit on lands where people have been displaced.” Equally applied, this means that Airbnb should not be operating in any number of places; however, it is choosing to single out the Israeli settlements in the West Bank.