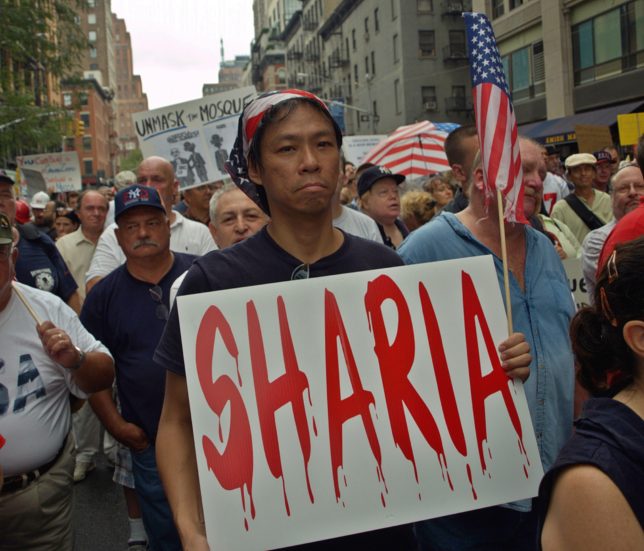 The CAIR Islamophobia report borrows from a method the SPLC and other leftists use all the time. They take a quote from a targeted opponent and present it without context. For example, of ACT for America, CAIR ominously states:

Why is that so unacceptable? CAIR and other Muslim organizations partner with communist groups like Black Lives Matter and join them in anti-American street protests all the time. Does anyone attempt to stop them? More to the point, is protest illegal? Like all public protests or marches, ACT for America’s demonstrations are similarly protected by the First Amendment. But CAIR would like to curb such demonstrations by those who oppose them.

Is this not an accurate statement about these groups? Of course it is. Should this not be included as any sober analysis of the threats America faces today? It was listed among a number of other legitimate national security concerns as part of an overall national defense strategy. But by presenting it all alone as an example of “Islamophobia,” CAIR avoids the debate—which they would lose—and assumes that readers will conclude that there is something intrinsically wrong with the statement.

CAIR then darkly describes a wider “xenophobic” network of 39 groups that have received $1.5 billion over three years. The report itself lists 46 groups, not 39, another mistake, so attributing the income to this smaller number overstates their income.

Sure enough, these 46 groups’ annual revenue totals almost $454 million, based on the latest year reported by IRS tax returns. So, for three years it does indeed add up to almost $1.4 billion—not quite $1.5 billion, but close enough. CAIR does not list the income of each individual group, but rather only the total for all groups. Looking at the table, it becomes apparent why.

Two thirds of the $1.4 billion goes to just one organization: Pat Robertson’s Christian Broadcasting Network (CBN). CBN is a Christian television channel responsible for the widely broadcasted television program, The 700 Club. It is one of the oldest and longest running programs in the nation, and it covers a wide range of issues from a Christian perspective.

Including CBN is dubious at best. CBN coverage runs the gamut, and is far more interested in Christian evangelism than questioning Islam. If being Christian is enough to be considered “Islamophobic” than CAIR and the SPLC are missing thousands of Judeo-Christian groups.

But including CBN serves a specific purpose. It is the only way to inflate the numbers enough to use the “B” word. And then you still have to add up three years. If the report omits CBN the total shrinks down to $145.9 million a year. Spread across the 46 organizations—excluding CBN—gives an average annual revenue of $3.2 million each—a comparatively modest sum in the nonprofit landscape.

Look at the table again. Besides CBN, there are only three groups that receive more than $10 million annually: The American Future Fund, The American Center for Law and Justice (ACLJ), and the American Family Association.

The American Future Fund is a group that promotes “conservative, free market ideals.” Is that “Islamophobic” too? The American Center for Law and Justice (ACLJ), is the organization formerly directed by current Trump lawyer Jay Sekulow. It was founded in 1990 to be the conservative answer to the ACLU. The American Family Association is another socially conservative Christian organization (“haters” according to the SPLC).

The National Review also makes CAIR’s list. Founded by William F. Buckley, the National Review is one of the oldest, continuously running conservative publications in the U.S., and it focuses on all aspects of public policy. It has also become a holdout for many never-Trumpers. Given their obvious political leanings, SPLC/CAIR should be celebrating it.

Concerned Women for America is another mainstream conservative organization and the largest women’s organization in the U.S.—larger than the Left’s National Organization for Women, although most citizens do not know this. Again, this group concerns itself with all issues relevant to women from a conservative perspective. Note also, that while its latest tax return shows revenue of $5.6 million (which includes $1.6 million from its 501.c.4 Action Fund), it saves very little, with net assets of less than $200,000.

Note also David Yerushalmi’s American Freedom Law Center, with a scant $1.3 million in revenues. It has engaged in court battles with CAIR on numerous occasions and has never lost—suggesting the real reason CAIR targets this group in particular. Much more about this later.

But there’s more. Of the 46 organizations listed in the “Islamophobia” report, 25 of them collected less than $1 million in the latest year reported. The group average is $332,000. Some received little or nothing at all. Phyllis Schlafly’s Eagle Forum Legal Defense and Education Fund, has amassed a large ($24.6 million) asset base over the decades to finance its expensive legal and education programs. But most operate on a shoestring budget with one or a few paid employees, so this “vast network” is beginning to look more like a paper tiger.

Most of these organizations are ideologically conservative and/or Christian, with little obvious coordination that could point to a “network.” And to the extent that any do interact, it is over national security, not “Islamophobia.”

On the other hand, CAIR’s founder and national executive director, Nihad Awad, earned $734,000 over three years. So, can we then imply that Nihad Awad is profiting from terrorism? From subversive, anti-American activities? From defamation?

The SPLC has made hundreds of millions destroying individuals and organizations they hate through defamation. So how much do SPLC’s leaders make? Over the most recent three years (so the numbers will be comparable), CEO Richard Cohen made $1,173,839; co-founder and Chief Trial Counsel Morris Dees made $1,185,099 before he  was ousted amidst a sexual and racial discrimination scandal; even Heidi Beirich—the report’s author—made almost half a million ($494,191) in that time span.

The news media, Hollywood, education establishment, and a major political party are owned by the radical Left and are more than willing to echo defamatory messages hatched by groups like the SPLC. So, it’s a pretty good business model. All you need do is abandon all ethics, morality, and interest in the truth.

But the fact is that nonprofit CEO’s of all stripes make a very respectable living, so once again, CAIR has painted a false image to defame its political enemies. For perspective, Juan Sanchez, a leftwing leader connected to many Latino open borders groups, is President and CEO of Southwest Key, one of the largest government contractors resettling illegal alien minors now flooding the border. Over the past three years, Sanchez has received compensation totaling $2,953,338—99 percent of which was paid by U.S. taxpayers.

In the next section of this expose, learn how CAIR is part of a larger network with a more subversive agenda.

Going Postal: How the Left Will Use Vote by Mail to Federalize Elections